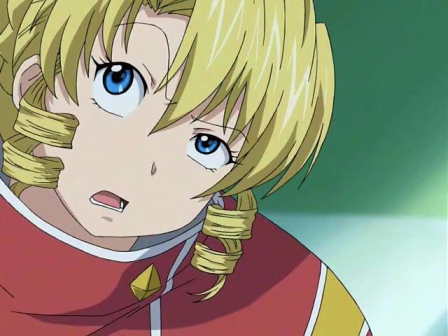 Because while I could write about some of the best anime out there, let’s be honest – hating on anime can be so much more fun. And to be fair, some of these anime can be quite fun to watch if a) you have a masochist streak a mile wide, b) you’re drunk and/or high, or c) you enjoy watching something that fails so hard it’s genuinely funny. I believe any of these could easily applied to the below anime. Because I want to keep things relatively current, I decided to narrow my top 5 selection down to televised anime that have been released within the last several years.

Okay, so I lied. What this series is actually about is a guy who gets a sudden harem of grade schoolers after being assigned to coach a basketball team. Naturally, the five girls greet their new coach by wearing maid uniforms and calling him “master” in a bid to make a good first impression. Who doesn’t? And then there are shower scenes and stuff. And lots of comedy revolving around one of the girls’ extremely large chesticles. In all honesty, this series wouldn’t have even blipped on my radar if it hadn’t been posing as a sports comedy (yes, that’s what it’s actually listed under). Best of all, our main character stopped playing basketball himself because his team was disbanded after the coach was suspected of being a lolicon. I have to assume that even the creator of this series saw the irony in that.

Everyone loves a good anthropomorphic train, am I right? No, that’s not a euphemism for anything. I have to give some kudos to this series – it’s certainly very informative. If you ever find your way onto the Miracle Train, six bishounen will give you more facts about their respective railway lines you could ever possibly want, while simultaneously solving whatever mundane problem it was that magically brought you onto Miracle Train in the first place (e.g. like being too organised or getting stressed from work). But only if you’re a young woman, because… well, just because. All educational intent aside, this show is the single biggest excuse for a reverse harem I’ve ever seen (and I’ve seen quite a few). I’m also tempted to compare this title to Initial D, since to have any respect for Initial D you have to really, really like cars. Likewise, to find any kind of entertainment in Miracle Train, you either have to be a train otaku or else be head over heels in love with a bunch of anime guys no matter how ridiculous the narrative.

I feel a vague twinge of guilt in listing this one, just because any anime based on a video game almost guarantees that it’s going to be awful. Unfortunately, Devil May Cry is so bad that I just couldn’t help myself – it takes game-based anime to a whole new level of bad. Mostly this is because the anime tries to be bad-ass and fails miserably, and there’s never anything quite so cringe-worthy as a bad anime that tries hard to be cool. I’m well aware that the game itself is all about scoring points by attacking bad guys as stylishly as possible, but that’s no excuse for this anime’s patently ridiculous action scenes, or for the incredibly poor scripting. Even the voice acting for this is terrible – I had to keep checking just to make sure I wasn’t bleeding out of my ears (and the last time that happened I was accidentally watching Bible Black in English).

The title translates roughly as ‘Magic Breast Secret Sword Scroll’, and in a parallel-universe Edo period, the Tokugawa shogunate has decreed that the bigger breasts you have, the higher social status you are bestowed. Those with small breasts are the lowest of the low, a subhuman species. Luckily, the main character has an amazing ninja technique that allows her to enlarge or reduce anyone’s breast size, and therefore makes it her ultimate goal to ensure that every woman in Japan has a decent-sized bust. Naturally there are two versions of the show. One of them has glowing beams of white light that quite literally takes up nearly half the screen whenever anyone’s breasts are exposed. The other version is the reason why ‘historical action’ as a genre is about as accurate as saying Ro-Kyu-Bu is all about basketball.

Now with added b00b-shine! This series also comes complete with lots of scantily-clad casino girls/babysitters (same thing, apparently), and an old guy with a most excellent beard and a gambling addiction. But then, it’s a gambling anime, so I’ll forgive him even if he does let his granddaughter wander around the casino befriending well-endowed card dealers at random. See, there’s this casino worker named Rio who somehow brings luck to customers just by walking past them, and when a young girl visits the casino with her grandfather (she can’t be much older than 10 but I guess it’s school holidays or something), she and Rio become BFFs as Rio competes to become the MVCD – the Most Valuable Casino Dealer in the world. … Now that I look back I’m not exactly sure why there’s a little girl wandering around with her stuffed teddy bear, but whatever. The point is, this is like Yu-Gi-Oh only with gambling battles instead of monster cards, and you know that’s gotta that’s a recipe for awesome right there.

Question of the post: What’s the worst anime you’ve seen within the past few years? Is it so bad that it’s good, or is it something that’s made you want to develop amnesia?