I suppose it’s not surprising that the current season seems like it has really flown past, even though it simultaneously feels as though I’ve only just started most of these shows. With one exception, every new series I picked up for spring 2013 is slated to have a run time of 13 episodes or less – the current financial issues of the anime industry being what they are, this is also probably not surprising. So now that the summer season is creeping up on us, it’s time to see which of the spring titles, if any, have altered my opinion since I last looked at them in my previous anime taste testing post HERE.

The art style of this series has really divided the fandom, although personally, it didn’t and still doesn’t particularly bother me. Mostly I think people need to pipe down already and just watch the damn thing without dwelling further on it – the artwork has already received extensive discussion by plenty of viewers and critics. Quit flogging the dead horse. On a narrative level, Aku no Hana has only drawn me in further. The intensity with which it tells its story and the large amount of raw, ugly emotions driving the plot can make this a difficult show to watch, but I believe the journey has been well worth it (that final scene of episode 7 alone… wow. Just wow). The pacing, which I had some complaints about in my earlier post, has also evened out considerably.

I’m continuing to enjoy this series a lot, primarily for the comedic value. In terms of storytelling it’s not the strongest title of the season, although it certainly is the one providing me the most laughs (something of a relief given the serious nature of the rest of this list). Not all of the jokes are spot on, and some have gone down the cliché route despite my hopes that they would have more originality. On the whole though, it’s been a good watch which has maintained a very solid consistency. 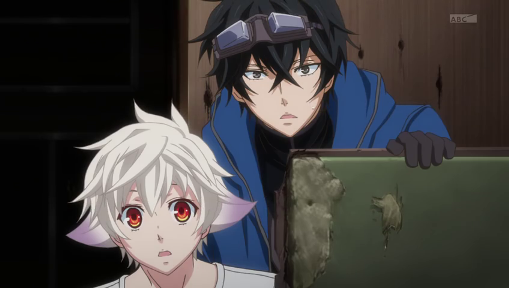 Dropped. As I said in my earlier post, I really wanted to like it. It has all the right ingredients, but something just isn’t right – it’s like a chocolate cake that looks like it’ll be amazing at first glance, only then I ate some and discovered the chocolate was low-grade factory material. What the series should be is deliciously dark and rich in a Kuroshitsuji kind of way; what it actually turned out to be is dismayingly average. Given Karneval’s potential and how much I was looking forward to watching it before it aired, this is my biggest disappointment of the spring season.

I would drop it, but with only 2 episodes to go I figure I might as well grit my teeth and finish. This show isn’t awful by any means – on the contrary, there are still points about it which are deserving of credit. The story itself, which showed a lot of promise during earlier episodes, is unfortunately no longer one of them. A longer series with a tighter focus might have managed to bring the threads of supernatural drama and high school fantasy together, but Red Data Girl has now become a watered-down and somewhat ridiculous version of Hogwarts, interspersed with the occasional decent plot device. As with Karneval, things simply haven’t panned out as well as they should have given its potential, and I can’t imagine that things will drastically improve with what little time it has left. 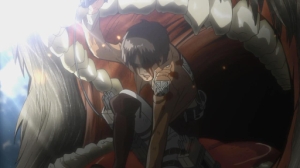 Shingeki no Kyojin/Attack on Titan
Original Score: None
New Score: 7/10

Having dropped Karneval, I ended up picking Shingeki no Kyojin up in its place – by far the most hyped-up title of the season. So far, my feelings have been rather mixed. On the one hand, it’s easy to see that this show has numerous good qualities. The soundtrack is excellent, the animation (when the series bothers to show it off instead of throwing around awkward still frames for no apparent reason) is lovely, and there’s a very interesting mix of characters. On the other hand, I’m also unable to completely ignore the flaws. For a start, I’m definitely not a fan of the thick outlines being used for the character designs – why the art directors decided to do this, I have no idea, since it creates a more cartoonish vibe when nearly everything about the series is supposed to be grim and bloody. The scripting also comes across as stilted sometimes, like maybe whoever’s in charge forgot that you can’t just take all the lines from a manga and expect a conversation to flow smoothly when it’s transferred onto screen. These are small niggly details that normally wouldn’t bother me too much, but on a more important level, I haven’t yet really clicked with most of the characters. Personally, I like the fact that Shingeki no Kyojin is pushing its dark and gritty atmosphere by beating the ever-loving crap out of its cast. However, this is a big problem when this starts happening before you’ve had the chance to develop any particular emotional attachment towards anyone. If an anime is going to kill off and hideously maim its characters so ruthlessly then I’d better actually care about them first, otherwise it’s going to be just another soulless bloodfest. Thankfully, episode 8 was where I started to seriously root for our heroes, so my opinion on this aspect may very well change by the end.

This has been another very divisive series, mostly I think because of the fanservice (which I didn’t have a problem with myself, but can see why others did. That’s a whole separate conversation though, so I’ll leave that for now and just focus on the overall show). Suisei no Gargantia has taken over Hataraku Maou-sama! to be my favourite spring anime title, and coming from a non-mecha fan, that’s impressive. I’ve noticed plenty of viewers complaining about the lack of action and slow, slice-of-life pacing, and I can’t argue with that – this is clearly not an action series, and I didn’t imagine it ever would be. In truth, there are one or two areas where I do wish things had been hurried along a little. However, the character development is second to none, and the production quality likewise continues to hold up beautifully. It might not have as much mainstream appeal as the louder or more action-filled titles like Shingeki no Kyojin, but it’s my belief that Suisei no Gargantia has featured some of the best world-building and general storytelling we’ve seen over the past several anime seasons.

Question of the post: Have there been any titles which have really surprised you this spring season, either because they were far better or far worse than you were expecting?