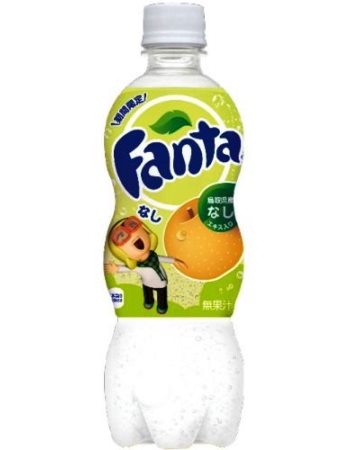 Early to mid-Autumn is a lovely season in Japan. The days are still deliciously warm, but the mornings and evenings are refreshingly cool with little humidity left over from the summer. It’s also when a lot of good pome fruit hits the supermarket shelves, including the Asian pear – a type of fruit native to China, Japan, and Korea. Also called nashi, they’re typically bigger and crisper than their Western counterparts, and due to their round shape look more like large apples than pears. Usually eaten raw and peeled, they’ve been cultivated in Japan since pre-historical times and tend to be a little rough on the outside but bursting with juice within.

I’ve actually long since been more of an apple fan myself – give me a crunchy, slightly bitter green apple and I’m happy as can be. I love green apple as a flavour in my drinks as well, particularly chūhai. Nashi is one of my favourite types of peer though, so I was happy to see one of the newest limited edition Fanta flavours in the kombini fridge the other day. (Incidentally, according to the bottle, Fanta Nashi is made with pears produced from Tottori – one of the prefecture’s most famous products.)

At first taste, Fanta Nashi is pleasant enough, and captures the taste of real nashi quite faithfully considering it’s still a run-of-the-mill store soda. It’s also not too sweet or syrupy, which scores some major points in my books since I find those kinds of fizzy drinks more than a little sickening after just a mouthful or two. Compared to most other Fanta editions, including both Grapefruit and Ume that I reviewed back in July, Nashi has a markedly more subtle aftertaste to it, which may or may not appeal depending on how much of a kick you like to your sodas. Personally I didn’t think it was lacking in flavour exactly… although the indefinable magical ingredient was conspicuously absent. It’s not that Fanta Nashi was too watery for me, but perhaps it simply wasn’t crisp or stimulating enough for my taste buds. In contrast, I prefer something with a hint of sharpness to it that heightens the fizziness – although arguably, I’m if I’m after that then I’m looking in the wrong place to begin with.

Overall not a bad drink, and I give it props for being about as genuine to its namesake as it’s probably possible for a Fanta to be. Needless to say, if you like actual nashi then it’s a good bet you’ll like this, and if you don’t then better steer clear. I’d put it above Fanta Grapefruit but a good step below Ume – a mildly agreeable but generally average three out of five.

Question of the post: If you’ve tried it, what did you think of Fanta Nashi? When it comes to the real fruit, would you rather eat an apple or a pear? Is it the same when it comes to drink flavours?