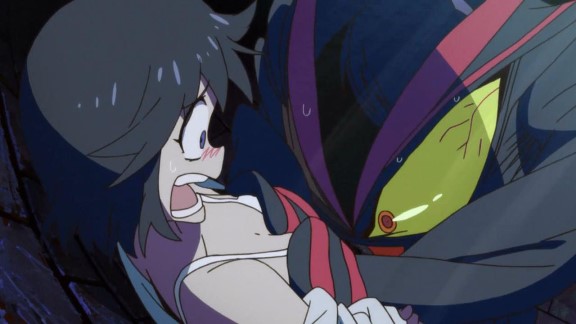 Despite it still being unseasonably warm (or so all my co-workers and neighborhood obaachans tell me), the fall anime line-up is now well under way and so far looks to be extremely promising. Thankfully, the ‘cute girls doing cute things’ shows don’t seem to be as dominant this season, so I’m looking forward to shows that pack a little more punch this time around. Let’s take a quick look at those titles that piqued my curiosity, shall we? 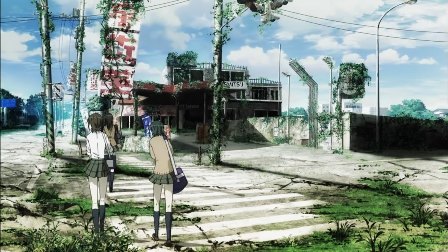 Might as well get the disappointments out of the way first. Coppelion has an interesting synopsis – twenty years after a nuclear meltdown has transformed Tokyo into a ghost town, the Self-Defense Force have dispatched three girls from special rescue unit Coppelion to search for survivors – but unfortunately, the actual material doesn’t live up to its premise. Ham-fisted and cliché melodrama seem to be the name of the game here, and I’ve already more than had my fill of the artwork, which features incredibly thick black outlines for the character designs (although the backgrounds are undeniably lovely). I salute the anime for the lack of fanservice thus far, given the tiny skirts, but am nonetheless unable to take the idea of high school girls sent into dangerous radiation zones with any seriousness whatsoever. Dropped. 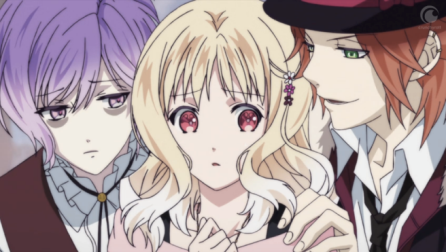 I’m not going to make any moral statements about this one. The anime is based on a video game aimed primarily at women that includes BDSM themes, so if this kind of thing isn’t up your alley then the solution is quite simple: don’t watch. I took a peek primarily out of morbid curiosity (there are very few reverse-harem anime titles out there revolving around the supernatural), and while I can’t say with any honesty that Diabolik Lovers is good, my experiences won’t scar me for life or anything – frankly, I’ve seen far worse. At the very least, production qualities are actually significantly above last season’s Brothers Conflict reverse-harem offering. Of course, the story execution is about what you’d expect, so dropped. 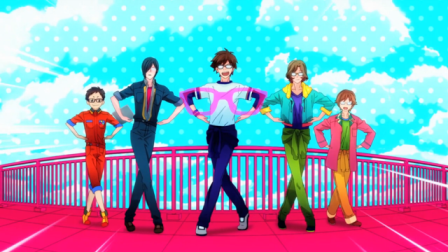 Well, the idea is… interesting, I guess, if you’re into that sort of thing. Like last season’s Free!, Meganu-bu! seems to be aiming to capitalise on the male moe fad, and to be fair it’s not completely terrible. The ‘plot’, revolving around five glasses-wearing high school boys and their glasses club, isn’t exactly challenging, so any entertainment to be had here would have to be strictly cheap comedy – which is exactly what’s delivered. The visuals are quite interesting and certainly pack a wallop (maybe too much of one at that, given that I only just managed to finish the first episode without having a seizure). Story-wise though, while parts of the show did have me cracking a smile once or twice, I mostly feel like the anime is just trying way, way too hard to be funny; never an endearing quality. Dropped. 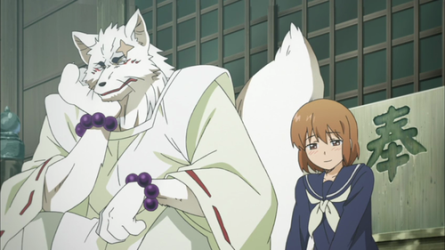 The synopsis for this reminded me very much of Kamichu!, one of the sweetest anime titles I’ve ever watched, so I was interested to see if Gingitsune would hold the same kind of charm. So far, it’s cute enough but not particularly gripping. There’s nothing wrong with the story, which follows the daughter of an Inari shrine priest who has inherited the ability to see the shrine’s fox spirit named Gintaro, but there’s also nothing to really make this slice-of-life fantasy series really stand out in any way. I’ll hang on for one more episode, because I find the relationship between Gintaro and our main character rather adorable, but otherwise nearly everything about this show so far practically screams of cutesy averageness. 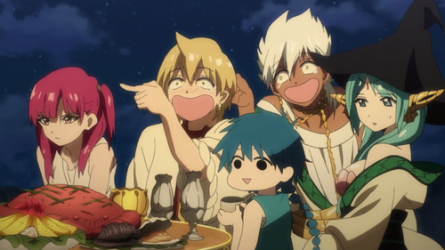 I still have conflicting feelings about the first season of this show – mostly because although I very much liked the initial half, I got sick to death of the Alibaba angst-fest and stereotypical shounen battle action during the second. That said, I enjoyed things overall just enough to make me want to watch more when I saw that season two was due to air, and I can see how I’d be able to continue my enjoyment of the series with a nudge in the right direction… namely, a turn back towards the solid adventure themes that characterised the first handful of episodes of season one. Since Aladdin is due to head off on his own in search of some personal enlightenment, I’d say that’s a good start. However, only time will tell if this turns out to be any good, or else just an Arabian Nights-themed version of Dragon Ball Z. 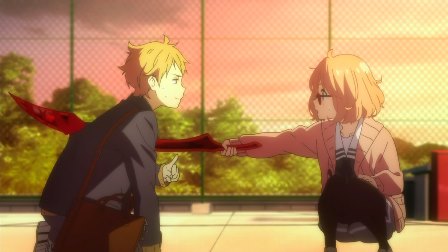 Hi again, KyoAni. You entertained me immensely with Free! and wowed everyone with your animation prowess once again, so let’s see what you have lined up for us this time. Oh, a dark fantasy you say? Colour me intrigued. Actually, I have yet to see any particular evidence of the ‘dark’ part, but at the very least, Kyoukai no Kanata delivers all the things that fans have come to expect from any KyoAni series – appealing character designs, wonderfully fluid animation, and all manner of witty dialogue. While the plot is very different, stylistically I think this one has a fair bit in common with Hyouka, so if you liked that, then I imagine you’ll almost certainly like Kyoukai no Kanata as well. I don’t really have much more to say about it so far, since the story hasn’t progressed enough for me to tell whether or not it’ll truly deliver in the plot department. For now though, despite one or two annoyances, it’s a solid enough show that I don’t want to drop it unless it gives me a good reason to. 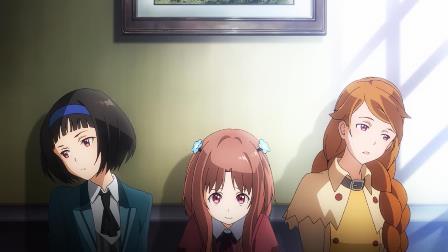 One of the two shows this season to air on the noitaminA programming block, Galilei Donna is so far a pleasant mystery – pleasant because it’s already a fun ride, but a mystery because I’m not completely sold on the actual story or its characters. According to the synopsis, our three female Italian astronomers and descendants of Galileo are going to end up on international wanted lists, and judging by the first couple of episodes we’re going to be dealing with some… um, creative mecha influences. Other than that, it’s difficult to tell how and where things will go. The production qualities make this show a joy to experience though, so I have no problem watching more while I wait to find out. 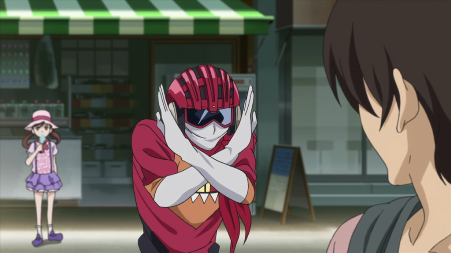 The other noitaminA title of the season, which had me rearing to watch as soon as I learned that it would be directed by Omori Takahiro (also at the helm of shows such as Baccano!, Durarara!!, Natsume Yuujinchou, and Princess Jellyfish). The superhero themes here put me in mind of the likes of Kick-Ass and Tiger & Bunny, although clearly with its own vision in mind, and that suits me just fine for the time being. Again, some great artwork and animation going on here, and hopefully a story with some boldness and creativity to match, although it’s a little too early to call that one. Between this and Galilei Donna though, I’d say that Samurai Flamenco is the more solid of the two. 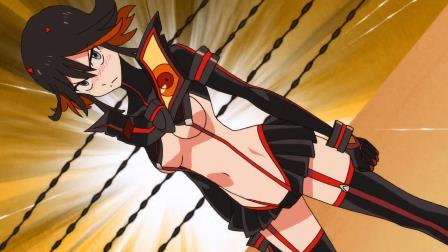 This series already had a substantial amount of buzz weeks before the first episode aired, primarily because it’s the first original anime to be released by Trigger – the studio founded by a couple of former Gainax employees – and directed by Imaishi Hiroyuki, written by Nakashima Kazuki, and features character designs by Sushio (all three of whom worked together previously on the extremely popular Gurren Lagann). And comparing Kill la Kill to Gurren Lagann (or Gainax’s FLCL and/or Panty & Stocking with Garterbelt) is easy to do – the story, a fantasy action piece taking place in a high school where students possess uniforms that give them superhuman fighting abilities – is obviously different, but it’s that same style of crazy, no doubt about it. Actually, ‘crazy’ is a mild way of putting it; Kill la Kill is more like crazy on speed. It has zero sense of shame and zero interest in pulling its punches – every single thing about it is amped up to truly ludicrous heights. The fights, the fanservice, the plot, is all taken to extreme levels of rapid-pace what-the-fuckery, and so far, I’m finding it addictive as all hell. That fanservice alone would probably either come across as either offensive or simply pathetic in any other situation, but Kill la Kill is just so cartoonishly campy and over-the-top that I don’t think anyone, least of all the creators, could take it seriously. However, I will note that just because an anime is ridiculous doesn’t mean it has nothing meaningful to say. 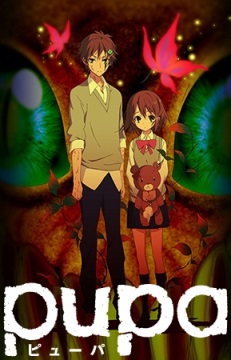 Well, this definitely looks promising, in a very dark and twisted way. It’s being listed as a fantasy, horror, and psychological “life-and-death sibling” story about a boy and his younger sister, who is transformed into some brand of demonic human-eating creature. I dare you to watch the trailer and not be creeped out, at least a little. It’s not that I’m a sucker for horror, but I do feel that given many of the titles from the previous anime season, I’ve overdosed a bit on cutesy shows recently. I want something with a bit of serious substance to it, and Pupa sounds like it just deliver that in spades. Rumour has it that Pupa has been delayed because the creators are refusing to censor the content – which of course will almost certainly result in more people now wanting to watch it, if only out of curiosity.

Question of the post: Do you think the fall anime season is better or worse than the summer season? What’s been your favourite and/or least favourite title so far?