You know, I really didn’t anticipate such a solid winter line-up. Based purely on the first versions of the charts that came out, I imagined something of a snooze-fest – and to be honest, I don’t think we have any truly ground-breaking shows here. However, there are also very few shows that I’m dropping. Normally I pick 10 or so titles and end up either disliking or losing interest in at least half of them, whereas this time around I picked fewer titles but am happy with nearly all of them so far. Perhaps it’s not a season of standouts so much as it is a season of surprising consistency.

I usually don’t bother with any particular order with these things, but today I think I’ll go from high to low.

Also known as That Show Everyone Is Watching Even Though They Otherwise Wouldn’t, Because Watanabe Shinichiro. Incidentally, Cowboy Bebop is one of my all-time favourite anime, which I’ll not apologise for, but anyone going into Space Dandy actually expecting something similar is clearly missing a few brain cells. Science-fiction, yes, but that’s about all that Cowboy Bebop and Space Dandy have in common – and I’m okay with that. Now that that’s out of the way, the rest of what I have to write is fairly straight-forward, because Space Dandy is itself a straight-forward kind of show. Whether you’re going to find it genuinely funny or not can probably be determined within the first few minutes, but you should probably watch it if any of the following appeal to you: energetic gag comedies that repeatedly break the fourth wall; campy shows that intentionally disregard any semblance of plot; retro-inspired stylishness blended with undeniably high production values; or pompadours. Personally speaking, I really like what I’ve seen of Space Dandy so far, but I get that humour is subjective.

This one’s a direct continuation of the first season so I’m not going to waste words here, since if you liked the former then you’re probably already watching this. But for the sake of any readers who may have missed out on Gin no Saji when it first came out, I’ll briefly sum up by saying that although it was probably my favourite title of the summer line-up, it probably won’t appeal to anyone not in the mood for a laid-back slice-of-life show combined with mostly gentle comedy. There’s no action as such, no fanservice to speak of, and probably no surprises in the long run. If this is exactly the sort of thing that doesn’t appeal to you, move along. Otherwise, it’s a great show.

Even though this studio has pulled out a couple of not-so-fabulous adaptations over recent times (looking at you, Gosick/No. 6/crappy Eureka Seven sequel), and despite the fact that this particular series is based on an as yet unfinished shounen manga (and we all know how those tend to go), I choose to remain optimistic. The fact that it’s set to be only 12 episodes long makes me a tad nervous, but so long as Noragami doesn’t get screwy with its pacing, what I’ve seen so far is actually pretty good. BONES is doing what it does best and delivering vivid artwork and fluid animation, the direction seems solid enough, and the plot itself, while not exactly original, is one that can hold its own without resorting to only flashy action sequences or rapid-pace banter alone to convey its story. What shortcomings Noragami may or may not have, it will probably make up for with its obvious style. Seen the OP yet? The soundtrack seems pretty good too.

I’m in two minds about this one, because as obvious as the clichés are, I find myself genuinely enjoying things. With a main character named Kal-el, a love-at-first-sight meeting complete with Titanic pose, and a few none-too-subtle gesturings towards class conflict of almost exactly the same Titanic-esque variety (among other issues), we have ourselves a show that should probably be average at best – and then only if you actually like romance as a primary theme, alongside what I’m assuming is also going to be an action/adventure show involving mostly aviation and floating islands. That said, I wasn’t especially put off. Maybe it was the lovely backgrounds, or the nicely integrated CGI for those aerial scenes, or the fact that, for whatever reason, I found the whole courtship thing actually kind of sweet. I suppose the latter could be seen as being rushed, but with only 12 episodes to get through a dramatic and ostensibly quite ambitious storyline, I’d say it’s a good thing that the series isn’t wasting any time. 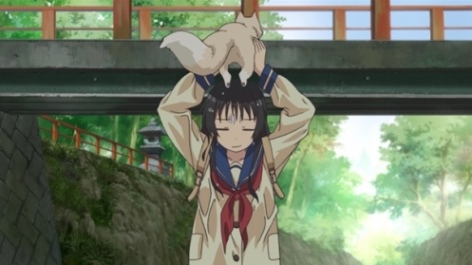 It’s certainly been a good time for fox deities in anime. Inari, Konkon, Koi Iroha is half school romance and half supernatural comedy, and I quite liked the first episode – I may even be bumping the score up a bit later on down the road. My prediction based on the synopsis was that it would be a relatively light-hearted and easily digestible watch, and I’d still say that’s about right. It’s got a vaguely similar vibe to Gingitsune (although the plot is quite different), and also puts me a little in mind of Kamisama Hajimemashita in terms of its general silliness. However, it seems more charming to me than both of these titles, and is perhaps even slightly reminiscent of Cardcaptor Sakura… although that may only be due to the appearance of the (protective?) older brother who, funnily enough, can also see spirits and is named Touka. 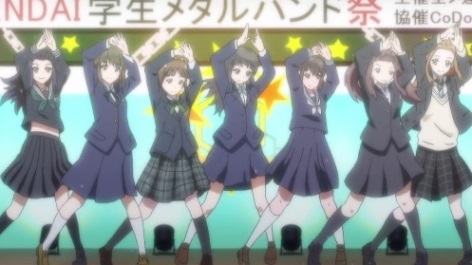 I highly doubt I’ll be keeping up with this one, though I’ll freely admit to being completely biased since I don’t generally like idol shows (or indeed actual idols) to begin with. This one has the advantage of being a slightly more realistic depiction of things, but unfortunately for me, that also translates as boring. To be honest, the only reason I put this series on my watch-list at all was because I thought it might have something interesting to say about Japan’s music industry, which I do have an interest in. And Wake Up, Girls! could very well do that, but I simply don’t have the patience to stick around and find out. Frankly, I had enough trouble focusing my attention on just the first episode. Also, yes, I’m perfectly aware that the movie is a prequel and should be viewed as the pilot for the whole thing, but I haven’t watched it and don’t intend to. I resent the fact that I should necessarily spend almost an hour on something prior to the first episode of a TV show just so that I can properly ‘get’ it. (Note that for all my complaining, there’s nothing inherently ‘wrong’ about the series that I’ve seen so far, so I’m hesitant to trash it by giving it a super low rating. It’s just that I have so little personal interest.)

Oh dear. Alright, where do I start? First of all, I’m guessing that 4-minute episodes (3-minute really, once you’ve subtracted the OP and ED) weren’t what everyone was hoping for. I absolutely don’t have anything against these types of shorts – usually they’re straight comedies, sure, but 2013’s Yami Shibai more or less proved that this format can potentially work for horror as well. The difference there however is that Yami Shibai is strictly episodic, whereas Pupa has a major overarching story. That’s the most obvious problem. The second is the god-awful censoring, which basically renders the horror aspect of the series utterly pointless. The third… well, it’s just not that great a show. The artwork is actually kind of interesting, but the animation is crap and the pacing is just so all over the place that it’s practically non-existent. Otherwise, there’s surprisingly little to say for a title that initially attracted so much attention. It hardly qualifies as worst anime ever or anything silly like that, but it also lacks any kind of punch whatsoever.

Cue the sounds of absolutely nobody being surprised at the news of yet another delay. This show – a retelling of the original manga but targeted at older fans – is now scheduled for release in July. I was excited, once. At this point though, it’s become like some rare and quite possibly mythological creature; sure, everybody claims it’s out there, but it’s never actually been spotted and maybe never will.

And now, onto the OVAs and specials. I won’t be scoring these ones, mostly because I feel that there’s too little material to base them on. 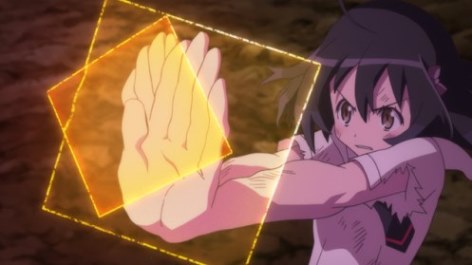 Hmm… no. It’s not terrible, but no. I gave it a look because anything directed by Sato Junichi (Sailor Moon, Princess Tutu, Aria) is probably deserving of one, and there’s nothing ‘wrong’ with it per se, but I just can’t bring myself to care, either about the characters or even much of the story. However, if I was to hear that this was a precursor to a full series, then I’d happily give that a try. (I’ll also be watching the second OVA episode when it comes out, mostly because I can’t think of a good reason not to.)

I’m not going to get into any debates about how good/bad the series is or whether you love/hate it – that’s what my full reviews are for, so please be taking those sorts of comments over there if you still have any. I don’t think there’s much to say about the special, since it functions primarily as a big recap in order to bridge the first season with the upcoming second one, and then as a means of shoving fanservice in our faces. Because I didn’t need the recap, and because the fanservicey parts of SAO aren’t what I like about the show, I think very little of the special but am also aware that it accomplishes exactly what it sets out to do, so whatever.

A franchise I’m head over heels for despite its length, and without a doubt my favourite supernatural slice-of-life anime out there. I don’t know if this single episode is set to be a direct sequel of some kind or just your basic fun extra, but I’ll be watching it regardless. Release date is February 5th.

Question of the post: How’s the winter season shaping up for you? Are there any major stand-outs, surprises, or disappointments?