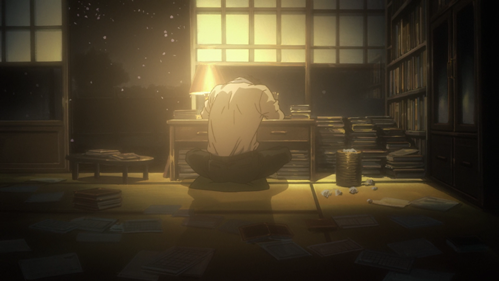 Aoi Bungaku (Blue Literature) is a challenging anime to review for at least a couple of reasons. While the main concept behind the series is laudable, the overall result, although interesting in its own right, is distinctly uneven. Trickier still is that six individual stories, each originally created by several Japanese authors, are all contained within this single 12-episode title – one which, on top of that, also happens to be directed, written, and animated by a number of different people.

The idea of adapting classical literature into anime format rather than the more common manga, game, and light novel titles isn’t a particularly new one; William Shakespeare’s Romeo and Juliet, Lewis Carroll’s Alice in Wonderland, Victor Hugo’s Les Misérables, and Alexandre Dumas’ The Count of Monte Cristo are only the first few examples that come to mind. However, anime that are based on Japanese classical works are much less frequent (although certainly not unheard of – for instance, Murasaki Shikibu’s The Tale of Genji). For this reason alone, Aoi Bungaku already stands out as being a little unusual – and that’s before taking into account the way in which each of the six stories are interpreted.

I’ll be blunt: I find it extremely difficult to say much about Aoi Bungaku as a single production, because one of the only things its stories have in common is the fact that they were all written just prior to, during, or immediately following the Meiji Restoration. Other than that, the plot, tone, and art style differs wildly between each of them, and while some feel reasonably effective, others are less inspiring. The only other solid commonality between the stories is that they’re all given a brief, live-action introduction by actor Sakai Masato – which I must admit strikes me as a bit silly. Although probably relatively well-known to those who watch a lot of Japanese live-action film and television, Sakai is hardly a household name, and the delivery of his introductions (whether by his own volition or not) seems needlessly theatrical. I don’t dismiss his vocal talents – he’s actually the voice actor for many of the main characters in Aoi Bungaku – but the ‘special effects’ of the prefaces feels cheap and melodramatic, and could easily have been dropped in favour of a voiceover or even just onscreen text. (… Also, is that turtleneck really necessary?) All things considered, it’s much less problematic to deal with each story in Aoi Bungaku on an individual basis. 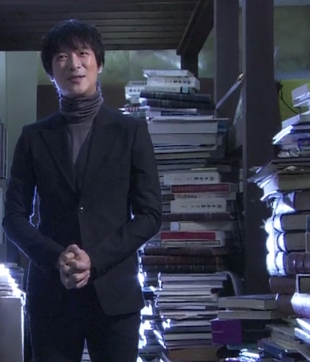 First up is Dazai Osamu’s No Longer Human, which is the longest of the six stories and makes up the first four episodes of the series. Considered to be Dazai’s masterpiece and something of an autobiographical work, it’s perhaps the strongest tale in terms of atmosphere but one of the weakest in actual storytelling. Revolving primarily around themes of societal alienation, it’s obvious right from the start that this is not going to be a happy or even redeeming narrative. Main character Oba Yozo not only struggles to establish meaningful relationships with others but is also clearly wrestling with mental illness, and the world as seen through his eyes is often downright creepy. The dark colour palate and fairly realistic character designs make No Longer Human visually striking and a perfect vehicle for the somber tone of the original work, but the pacing is jarring to begin with, and only made worse by the abrupt time-skips. 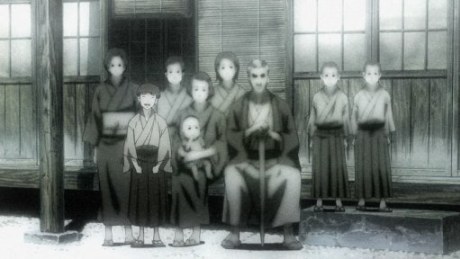 Next in line is Sakaguchi Ango’s In the Forest, Under Cherries in Full Bloom, about a bandit who captures a beautiful maiden in the forest – a woman who is far more than she first appears. The artwork suddenly switches to a candied brightness for this one, and the mood initially feels almost humorously ridiculous in comparison to No Longer Human; it’s like going from Kansas to Oz, only with zero plot connection to tie things together. Like the story itself though, appearances can be deceiving, and the scenes of extreme violence are all the more eerie thanks to its playfully colourful approach. In particular, the scene where the bandit viciously slaughters all but one of his many wives/servants in exchange for Akiko’s promise to marry him, set to a lilting musical number, is one the most evocatively powerful moments of the entire anime series. Comparisons have been made to Sweeney Todd, and I can certainly see why. 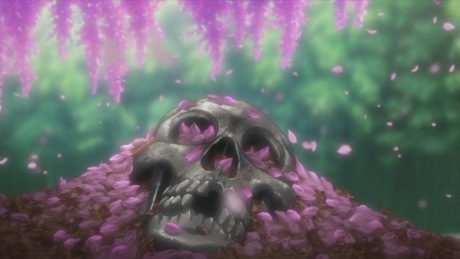 The third story is Natsume Souseki’s Kokoro, whose first episode I quite liked while feeling nearly completely indifferent towards the second. As the least bizarre and most emotionally penetrable tale of Aoi Bungaku, it takes an artful but still relatively straightforward manner of storytelling, which seems to work just fine. My main issue lies with the love triangle being narrated from two points of view – first from the student’s, and then from the monk’s. Normally I’d have no problem with this, but in this case it just seems counterproductive to the purpose of the anime. I’m no purist; I don’t see anything inherently wrong with making changes when it comes to screen adaptations. But while the original novel is told from the student’s point of view, the way in which K views the events are never explored, and assuming the point of Aoi Bungaku is to introduce these classic stories to a younger audience (as is more or less plainly stated by our esteemed turtleneck-wearing guide), telling the whole thing again from K’s perspective feels pointless at best, and self-indulgent at worst. 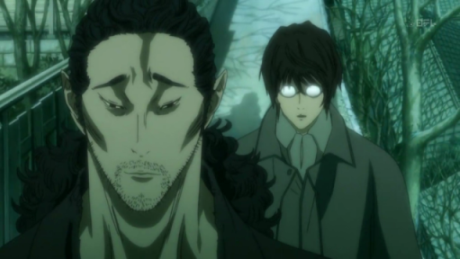 Fourth is Dazai Osamu’s Run, Melos!, an altogether easier watch than No Longer Human. A little heavy-handed on the drama at times, this was nonetheless my favourite story upon first watch, and despite not having a totally happy conclusion is still by far the least depressing. It also feels a lot more anime-like than the other stories here – not because it’s necessarily any more cartoonish or any less mature, but simply because I can easily imagine exactly this kind of story being created for a shoujo manga. However, on second thoughts I find that I don’t really have much to say about either the plot or the way it was executed, so I suspect that these two episodes may carry the least artistic and/or emotional impact for many viewers. 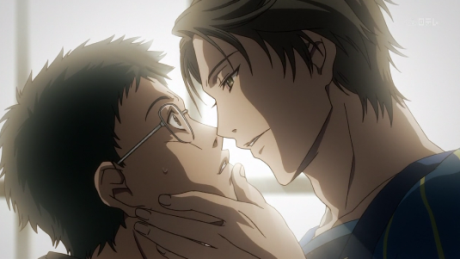 The final two stories, The Spider’s Thread and Hell Screen, are both by Akutagawa Ryuunosuke and make up one episode each. While they don’t have anything to do with each other in terms of plot, the interconnecting details make it obvious that, as far as the anime goes, they inhabit the same universe. For the purpose of this review, I therefore tend to view them as two separate parts of one general whole. These are actually my least favourite episodes of Aoi Bungaku – although they’re based on short stories rather than novels, I think that giving them only 20-odd minutes each was a mistake. Were it up to me, I would probably have ditched The Spider’s Thread altogether and spent the full two episodes on Hell Screen, which is by far the more engaging of the two stories. However, both episodes seem rather watered-down in contrast to the episodes that came before them; there are a couple of interesting things happening on a visual level, but unfortunately this doesn’t compensate for the weaker storytelling. 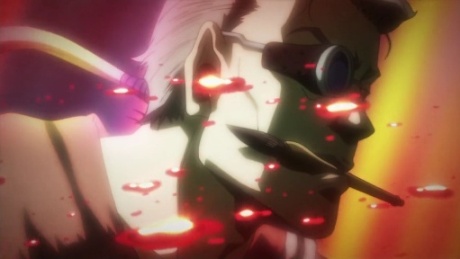 So, looking back, what do I think of Aoi Bungaku as an entire show? ‘Patchy’ is definitely one word that feels appropriate. Although there are a few standout moments and some good ideas, the series just doesn’t quite live up to what I think it could be. It’s not by any means a bad anime, but it also falls far short of greatness. Do give this a watch if you have an interest in Japanese literature – it’ll be worth your time – but just don’t expect to be bowled over by it.