The all-female Japanese musical theatre group known as the Takarazuka Revue could perhaps best be summed up as ‘restrained’, ‘subtle’, and ‘understated’ in style.

Yeah, okay, I’m kidding. In truth, I have yet to see any performance, Japanese or otherwise, that manages to be more lavish, more extravagant, or more damn sparkly than that of the Takarazuka Revue. It’s like experiencing a dream world – one that frequently features tight pleather trousers, sumptuous ball gowns, literal rains of glitter, and the odd mechanical Pegasus. 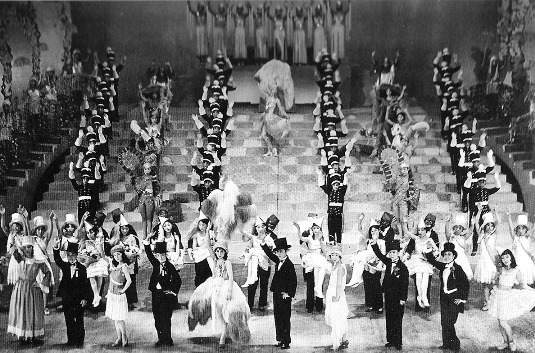 Formed in 1913 by industrialist and politician Kobayashi Ichizo, president of the then-fledgling Hankyu Railways, the Revue was initially founded as an attempt to boost train ticket sales and drum up more business in the city of Takarazuka – the final station of the Hankyu line from Osaka that was known primarily for its hot springs. As Western song and dance shows were growing steadily more popular at the time, it was thought that an all-female theatre group would be a well-received attraction by the general public.

Kobayashi was not wrong. Though public kissing was still very much frowned upon, the fact that such scenes were heavily implied but not explicitly acted out, and that the actors were all unmarried women, meant that the plays were deemed somewhat risqué but not unacceptable. In fact, so popular did these dramatic Broadway-style productions become that, a decade after its first official performance in 1914, the Revue had gained its own indoor, two-level Grand Theatre in the city.

With ongoing performances in both their Grand Theatre as well as in another theatre in Tokyo today, the company performs for roughly two and a half million visitors every year. Divided into five different troupes (Flower, Moon, Snow, Star, and Cosmos), each with their own particular sense of style, performances are adapted from all manner of Western stories, Japanese and Chinese folktales, and shoujo manga – from the likes of William Shakespeare, Charles Dickens, and Oscar Wilde to Tezuka Osamu’s Black Jack and Ikeda Ryoko’s Rose of Versailles. 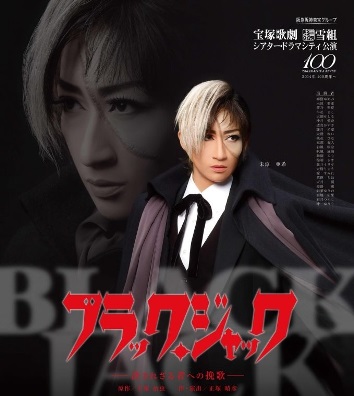 Promotional poster for 2013’s Black Jack. Perhaps a little less odd a choice for Takarazuka Revue than it sounds, since Tezuka grew up in Takarazuka and saw many of their performances himself as a child.

With no expense spared for lighting, set design, and costume, the Takarazuka Revue is all about spectacle and exaggerated flair – yet it would be untrue to say that the company goes in for style over substance. Before becoming a member of the troupe, aspiring actresses must be accepted to train in the highly competitive Takarazuka Music School for two years. Graduates then sign seven-year contracts to become junior members of the company, usually working as background dancers and playing minor character roles until they become upperclassmen and can negotiate their own contracts.

Though neither widely discussed nor openly spoken of within the group, the Revue has been written about by some scholars and critics as an establishment which fosters a kind of lesbian subculture. Plays are generally romantic in theme, with the tall, dashing, and low-voiced male roles (otokoyaku, literally ‘male role’) being played alongside their slighter, ostensibly prettier, and higher-pitched female counterparts (musumeyaku, ‘daughter role’). 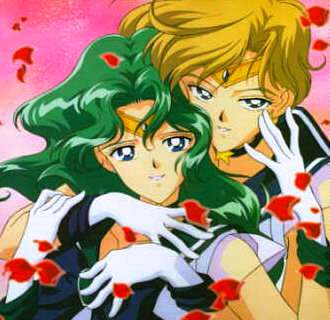 The characters of Haruka/Sailor Uranus (right) and Michiru/Sailor Uranus (left) were loosely based on the actors of Takarazuka Revue; a good anime example of the otokoyaku and musumeyaku archetype.

The viewership, meanwhile, is overwhelmingly female; up to ninety percent of the audience is made up of women, if some estimates are to be believed. Scandals involving love letters written by fans to the otokoyaku, as well as at least one actual lesbian relationship between an otokoyaku and musumeyaku, came to light before the company eventually sought to distance themselves from their resulting reputation of being a “symbol of abnormal love” by keeping its actresses in strict living conditions and forbidding them from answering fan mail or socialising with admirers. Regulations today for both actresses and fans are still relatively tight, and the Revue seems to have adopted something of a ‘don’t ask, don’t tell’ kind of policy – although needless to say, this does not stop speculation. 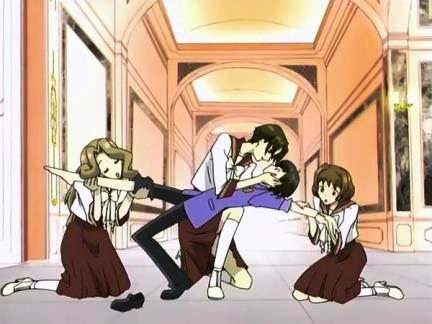 The Revue as parodied in Ouran High School Host Club by Lobelia Girls’ Academy, whose students (and in particular the ‘Zuka Club’ and their fans) are depicted as rampant lesbians.

Other authors have linked the Takarazuka Revue and its popularity among women with less inherently sexualised but more feminist ideas. On the one hand, the Revue is and always has been owned and operated by a corporate, male-dominated company, and actresses usually embody traditional and highly idealised gender stereotypes – strong, protective and handsome men contrasting with delicate, gentle, and classically beautiful women. On the other hand, there is also a perceived sense of freedom and empowerment surrounding the Revue; Japan is not a country known for challenging the rules of prescribed gender roles, yet the otokoyaku of the Revue necessarily subvert societal norms simply by being on stage. 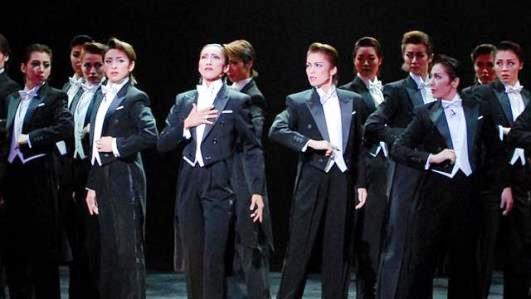 While it may have been partially envisioned as the female answer to Kabuki theatre, the Takarazuka Revue has long since become a much-loved establishment in its own right that, having celebrated their 100th anniversary this year, shows no sign of decline. Elegant, luxurious, and lovingly over-the-top, watching a performance is truly like straying into another realm – and, like any proper fantasy kingdom, it clearly has no trouble ensnaring the hearts of those who step foot into it.

Question of the post: Have you seen any Takarazuka Revue performances? If not, would you do so if given the opportunity?