Welp, already around the halfway point for most of these titles? Time really flies when you’re having fun following way too many shows for comfort. Nonetheless, I’m pretty satisfied with the line-up I now have – and if I’m still slightly unsure about a couple of them, the fact that all but two of these anime are set to be 12 episodes or less makes things a lot easier to juggle. (For people reading this who don’t know which anime I picked up to begin with, you can check out part one of this post here.)

Let’s get right down to it. Five titles have already been left to die a lonely death, so first things first – I’ll start with the honourably (or dishonourably) dropped.

Ao Haru Ride – Slow-moving, and the main love interest continued to be a jerk. Let me know when a more original (and less emotionally abusive) romance anime comes along.
Bakumatsu Rock – Amusing for a while, but the crack-tastic gimmicks wore out their welcome eventually.
DRAMAtical Murder – Meh. There’s absolutely nothing about this series that made it stand out either in a fabulous or a terrible way. I got bored pretty quickly.
Shounen Hollywood – Also slow-moving, and I never managed to get over my dislike for the character designs, music, or progressively more annoying voice actors.
Tokyo ESP – Messy, fanservicey, unintelligent, boring. It hasn’t scarred me for life or anything but there’s basically nothing at all here that I liked, either visually or story-wise. Easily the worst series I tried out this season.

And I have no regrets! So, without further ado, moving on to the better stuff.

Still on the fence about this one. On the plus side, boy this show is pretty! I really like the character designs and the animation is beautifully fluid – aside from Zankyou no Terror, it’s probably the sleekest title out this season. Loving the soundtrack too; the OP and ED themes are both good, and composer Sawano Hiroyuki (Shingeki no Kyojin, Kill la Kill) does great work as usual. On the other hand, I’m still not sold on any of the characters, who for the most part thus far have come across as either hopelessly clichéd or else just plain dull. I’d like to see more of one or two of them, but with a sizeable cast, strong characterisation/development is quite slow to build up – and since I’m neither a sci-fi nor a mecha fan, there’s nothing much left to tide me over in the meantime. I’ll give it a couple more episodes to more firmly capture my interest, otherwise I’ll drop it.

I stand by what I said earlier on – this may not be the most original of titles, and I typically don’t enjoy anime that get preachy with their stories (seriously, could these simplistic-yet-enlightened countryfolk get any wiser or more generous?), but Barakamon delivers enough humour that these aspects of the series come across as tolerably sweet rather than forced or overdone. Meanwhile, the characters themselves continue to impress; Handa makes for a refreshing main character simply by being a full-grown adult, and Naru actually looks, sounds, and behaves like a bright, lively 7-year old truly might – something that anime often seems to struggle with but gets just about perfect here. (Of course, it doesn’t hurt that Naru is also insanely adorable. It’s like a burst of sunlight appearing on screen whenever she shows up.)

I don’t know that I have much to add after last time. Although I will say that it’s really nice to have Rin not being an obsessive jerk this time around (having passed that baton to new character Sousuke and all). I feel like we didn’t get to see much of Rin’s real personality in the first season of Free!, and now that he’s no longer fixated on being a shark rival, he’s actually quite an engaging and sympathetic character in his own right. In fact, he might even have become a sudden favourite of mine, which I definitely never saw coming.

Okay, this is good – I’m really happy I picked Gekkan Shoujo Nozaki-kun up after all, so thank you to those readers who recommended it! It takes a lot to make me truly enjoy romantic comedies, but Nozaki-kun both uses and abuses the normal character stereotypes and situations enough to make me appreciate what it’s doing with the story. In fact, I’m more comfortable approaching this as a good-natured parody than a romantic comedy, because although the romance is in the basic set-up, Nozaki-kun is mostly just light-hearted fun and unpretentious satire. A couple of the smaller jokes are perhaps a bit hit-and-miss, but since there hasn’t yet been an episode where I’ve failed to giggle out loud at one point or another, I can forgive these fairly easily. Much like Love Lab last year, I went in expecting tired slapstick and trashy fanservice, and what I’m getting instead is intelligent writing and a distinct lack of panty shots.

Victorian England and Creepy Circus really do go together beautifully, don’t they? I’m so glad Kuroshitsuji got a remake featuring this particular story arc, because the atmosphere practically creates itself – all you need is some half-decent writing and it’s ready to go. I’m not sure what Book of Circus is like for anyone who hasn’t already seen the first series – despite this not being a sequel, the individual story’s place in the grand scheme of things is a little awkward – but I’m having fun at least. It looks good, it sounds good, and the plot seems to be progressing without any major hiccups so far. 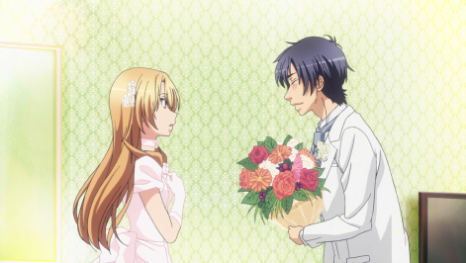 I still don’t care for the character designs – they’re tolerable, but that’s about it for me. Otherwise, I’m happy enough with Love Stage!!, which continues its unhurried pace through a story that’s predictable yet fun enough that I find I don’t overly care. As far as BL titles go, it seems to be keeping things pretty light, which works for me – there’s not enough of a plot to have things get too intense or angst-ridden to begin with, and it’s always nice to see an anime of this genre that doesn’t take itself too seriously. Of course, you can’t make it through any BL series without at least one molestation scene (I’m perfectly serious – I have yet to see a single BL anime that doesn’t involve sexual harassment, coercion, or assault… sigh, maybe one day), but then, I never expected any originality or innovation from Love Stage!! to begin with.

Man, this fortnightly format makes it hard to make a judgment call on Sailor Moon: Crystal with any kind of strong grounding – I can already tell that I’ll need to wait… holy crap, nearly a whole year before the whole thing is done so I can re-watch the show at a more reasonable pace. Thankfully, Crystal appears set on cutting away most, if not all, of the filler so that we probably won’t have to wait two weeks only to be confronted with a generic beach episode or something; three episodes in and we’ve already got three sailor soldiers nicely lined up (which, to provide a comparison, took 10 episodes to do in the original). Otherwise, I have nothing in particular I want to say that I haven’t already said in my previous first impressions post.

I’m mildly disappointed with Sengoku Basara this time around, although it’s thankfully not because the series is any less over-the-top – characters are still swinging around battle axes that are twice as large as their entire bodies, flying around on mecha-people, and swearing in English. No, it’s that the pacing is all over the damn place. This series jumps around more than a Game of Thrones episode, and often not even to the right locations; we’re getting an awful lot of Ishida doing nothing but looking ultra-broody, and surprisingly little of Date Masamune despite him easily being Best Character. Judge End is still a lot of fun – I wouldn’t dream of skipping an episode – but it’s simply not as well put together as the previous two seasons were.

I have the same sentiment this time around as I did with season one – some episodes are awesome, and others totally miss their mark. I always enjoy reading my blogroll on them either way though, because it’s pretty interesting to see which episodes people thought were good and which were a flop. I’ll often see two separate bloggers, both of whom I have a lot of respect for, having completely opposite opinions about a single episode. Anyhow, as you can tell by the score, I’m still enjoying Space Dandy as a whole – I just think that having so many episode directors, writers, animators, and storyboard artists constantly switching around is great for fostering creativity but predictably terrible when it comes to getting any kind of consistency.

Sword Art Online II feels like an entirely different series to the first season. I’m not even talking about one being so much better/worse than another – I mean that aside from the main characters (with the exception of Sinon, of course), they could actually be two completely unrelated shows. That said, I’m reserving any kind of judgment on this particular aspect of my viewing experience until I’ve seen the whole thing. But hey, speaking of Sinon – I really like what I’ve seen of her character so far! In-game, she’s tough and a bit of a loner but not bitchy in the least. Back in the real world, she’s dealing with some pretty heavy stuff that feels (mostly) realistic and also makes sense in terms of how it relates back to her online persona. Bring me some decent action and keep up this whole minimal (well, for SAO) fanservice thing, and I’ll be one happy camper.

Okay, so now that things have had time to settle down, I can see that Tokyo Ghoul is clearly going for obvious and campy instead of mysterious and suspenseful. I don’t necessarily have anything against splatter-fests, but they’re just not usually my thing (in fact, the most recent splatter-fest I can think of that I thoroughly enjoyed was the live-action Battle Royale… and that was back in 2000). It doesn’t help that Kaneki is really starting to bug me. Why must horror titles nearly always feature protagonists that do nothing but make stupidly poor life choices? At this point, Tokyo Ghoul is mildly entertaining, but the only reason I’ll probably keep watching is because it’s only 12 episodes long and so I’m basically already halfway through.

See, where Tokyo Ghoul is horrific by dint of all the gore, Yami Shibai is actually creepy, which is what I personally look for when it comes to horror. Not every episode works for me, but at least I know when I watch any of them that the horror factor will depend on the storytelling rather than the blood ratio. I probably wouldn’t recommend Yami Shibai to anyone who didn’t have some interest specifically in Japanese mythology, but I still say it’s a remarkably solid series, particularly given its non-conformist art style and 4-minute episode time constrictions.

My sole complaint with Zankyou no Terror is that Lisa isn’t getting enough screen time for my taste just yet (and if episode 4 is anything to go by, even that looks to be about to change). Other than that, I got nothing – Zankyou no Terror is well-written, tightly executed, visually gorgeous, and sounds fantastic. I don’t want to jump the gun and proclaim that Zankyou no Terror will hands down be the best show of 2014, but… well, it probably will. Bless you, Watanabe Shinichiro. You just keep doing what you’re doing, and I’ll just keep my unashamedly biased adulation alive and kicking.

Question of the post: Have any of your opinions changed significantly since the first couple of episodes? Are there any titles you’re still undecided on?