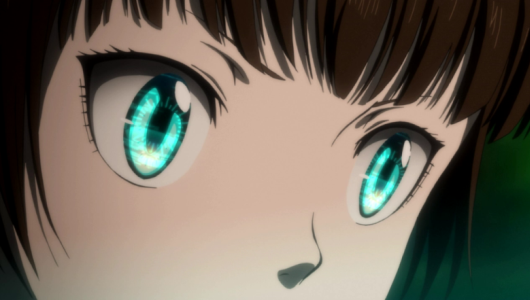 The fall anime season felt a bit slow to start off with but has been steadily building up steam, and while unlike a lot of bloggers I’m sad to see most of the summer titles behind us – I was honestly really happy with the line-up I had there – it’s always nice in a way to complete a cycle and gain a fresh hand.

Having viewed the premiere episodes (and in some cases more) of 10 fall anime in total, I’ve already dropped 3 of them and will likely keep 5 on for the long haul. See which have been left by the roadside, which I’m singing my praises to, and which I’m still on the fence about below. As usual, I’ll be tackling the worst at the start and leading into the good stuff further down. 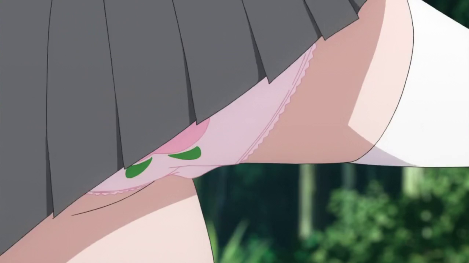 This anime series is sponsored by the city of Takahashi in Okayama prefecture in order to promote tourism in the area. I now feel profoundly sorry for the people of Takahashi. To be frank, Ai Tenchi Muyo! makes all previous incarnations of the Tenchi franchise seem like works of art by comparison. It also bears little, if any, resemblance to the original OVA series, or of Tenchi Universe or Tenchi in Tokyo for that matter. Even viewed as a standalone piece however, it’s a sad excuse of an anime, and one which makes it easier to count all the scenes where any given female character is not being shamelessly objectified than to count every panty shot on display. Don’t waste your time on a single episode of this drivel – it’s at least four minutes of your life that you will never, ever get back. 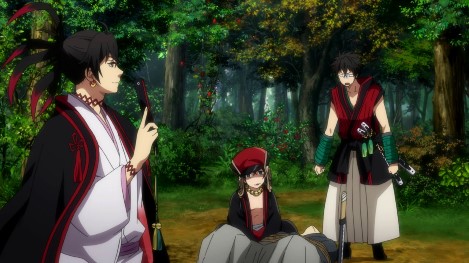 While clearly not the worst of the titles listed here, Donten ni Warau is definitely the blandest, and I can’t quite motivate myself to watch any more of it than I already have. The opening episode never managed to make me want to sit up and pay attention until the last minute or so – by which point it was too little, too late. The terrible exposition alone was enough to turn me off right from the start, and for a fantasy-action show, the whole thing felt remarkably dull and uninspired. What’s lacking in atmosphere isn’t made up by style, either; I suppose the artwork is distinctive enough in its own way, but it’s not something I actually personally like and it’s also not striking enough for me to give the series much credit on the production front in any case. This gets a resounding ‘meh’ from me. 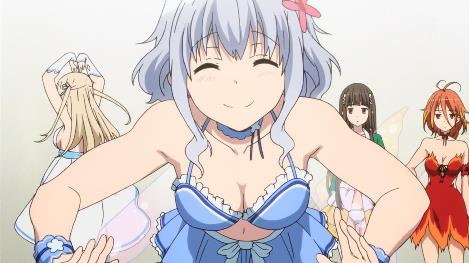 KyoAni. Good visuals. Not much substance. What else is new. Honestly, I feel that what little patience I have for moe-centric anime is now stretched very thin indeed. I gave the first episode of Amagi Brilliant Park a shot primarily because director Takemoto Yasuhiro was also in charge of Hyouka back in 2012 – by far and away the finest title that KyoAni has ever come out with. Amagi Brilliant Park doesn’t strike me as terrible, but neither do I see in it anything that they haven’t already done time and time again: ‘quirky’ offbeat characters, a very specific kind of deadpan humour that obviously appeals to many viewers but unfortunately not to me, and loads of cutesy fanservice obviously targeted towards its predominantly male demographic. Thanks, but I think I’ll pass. 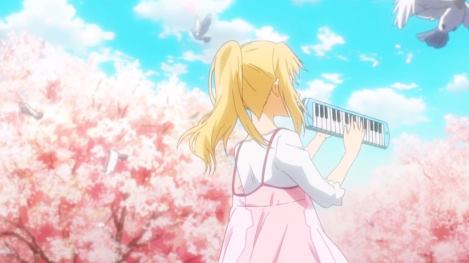 I want to like this more than I currently do. Okay, so good news first – Shigatsu wa Kimi no Uso looks very pretty. It also flows relatively smoothly in terms of story, with little in the way of awkward exposition but some nice drama there that doesn’t feel too overdone. Now for the bad news – much as I’d like to, I can’t overlook how ridiculous a lot of this comes across as. I don’t care how pure of spirit or fabulous a musician our main heroine is, I don’t think summoning pigeons while dancing around barefoot with a cluster of adoring kids makes for a convincing intro scene. Granted, anime isn’t exactly a medium known for its realism, but if we’re going for heartfelt drama set in real-world Japan, then I’ll need something a bit more believable than that. On a more personal note, there’s just something about romances set in junior high school that I really don’t like. Maybe it’s because I actually work there, but these tend to feel incredibly contrived to me, and often a bit squicky to boot. If Shigatsu wa Kimi no Uso is going to be more of a romance than a music-focused title, as I suspect it will be, then I’m almost certainly out. 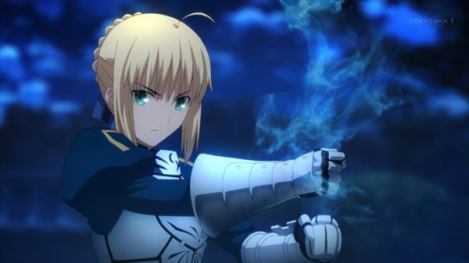 I should probably admit to myself that I’m just not cut out for this franchise. I’ve never played the visual novel and have no intention of ever doing so, and I completely failed to get into the 2006 anime adaptation. I can easily see that there’ll be a lot to appreciate about Unlimited Blade Works for fans – I like the artwork, the action scenes especially look fantastic, and I even sort of dig the very deliberate pacing – but I just don’t think I’ll have the patience to see this through. Unlike what I assume is the majority of viewers, I don’t have a pre-existing attachment to any of the characters (a couple of whom are already annoying me), and the fact that I’d have to sit through 48-minute episodes isn’t helping matters. I’ll give it another episode, but I’m not holding my breath. I will add however that my lukewarm response shouldn’t be taken as a slight of the anime. I would think that viewers with more of an emotional investment in the franchise than I do have a lot to be happy about here.

Orenchi no Furo Jijou/The Circumstances in My Home’s Bathtub
Score: 6/10 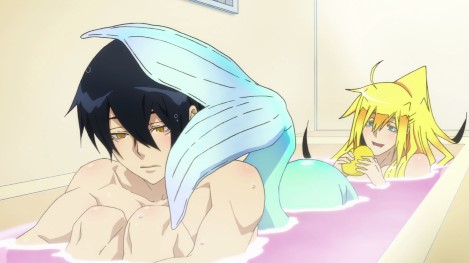 I’m getting very strong reminders of the single-episode boys love OVA Kono Danshi, Ningyo Hiroimashita (This Boy Caught a Merman) with this one – and that’s by no means a bad thing. Orenchi no Furo Jijou, or Orefuro as it’s more commonly being called, might not have the same artistic charm as the 2012 title, and it’s probably going to play out as plain comedy rather than surprisingly earnest and genuinely felt boys love drama, but I have a feeling I’ll be watching this series of four-minute shorts anyway. Although I would have much rather had a handful of longer episodes as opposed to thirteen very fleeting ones, I guess I’ll take what I can get. While it’s still too soon to know if my persistence will be rewarded, but if nothing else, this looks to be a sweet and inoffensive start to my week. 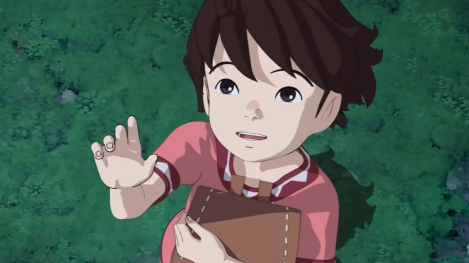 I’ll try not to say too much here, since as of this writing, the first episode of Ronia hasn’t yet been subbed so far as I know. I hadn’t expected a double-length episode either, and am unsure if this is going to be the norm or if two episodes were spliced together solely for the premiere. Either way though, I think this format works extremely well. I also dig the laidback and light-hearted tone, which seems only fitting for an anime series based on a children’s book. The easy-going humour really pulls things together, and in some ways it feels a little like a child-focused Disney movie. On a similarly positive note, may I also say what a great pleasure it is to see such an obviously doting father as a main character. Put together, these factors would have been more than enough for me to give Ronia a higher score than I currently have, but unfortunately the visuals are nowhere near good enough to match them. An all-CGI affair, I find the animation stilted and jarring, and see it as a lot of wasted potential; I can only imagine how stunning the show could have been with the full Ghibli treatment. That said, I don’t have anything against the character designs, and the voice actors do a great job. Criminally substandard visuals aside, I’ll most likely be sticking this one out.

Akatsuki no Yona/Yona of the Dawn
Score: 6/10 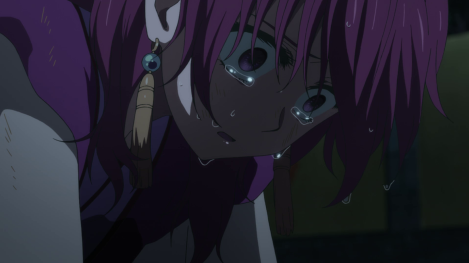 Original? No, not particularly, but I intend to stick with this one anyway unless I’m given a good reason not to. Reverse harems with an action/adventure bent rather than comedy/drama are few and far between, and anime titles with main female characters who a) aren’t used for the sake of fanservice and b) receive strong and long-term character development aren’t all that thick on the ground either. A lot of people seem to be comparing Akatsuki no Yona to Fushigi Yuugi, but I don’t see that particular comparison as either flattering or accurate; personally, I see more of Saiunkoku Monogatari going on here. While the first episode was perhaps a little lacklustre, episode two felt a bit sturdier, and I think Akatsuki no Yona has a lot of potential overall. I’m willing to give it time for that to come to fruition. 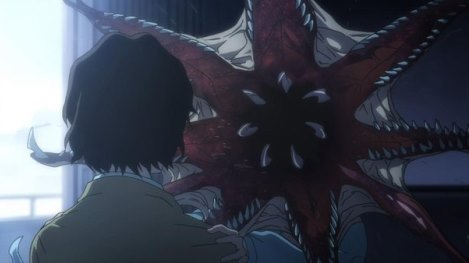 If I were keener on the horror genre then I’d probably be inclined to give this an additional point, because that was a very strong opening episode. No punches pulled, no ugly censorship or clumsy pacing, Kiseijuu seems intent on simply doing its job, and doing it effectively. I might have hoped for an art style that felt less… ordinary, I suppose, and it’ll be interesting to see whether or not the series will be able to sustain its current level of creepiness without either going overboard or becoming predictable – both major issues that horror anime especially frequently struggles with – but all signs point to an intelligent and potent show. I wouldn’t be surprised if this winds up as the single best horror title that’s come out of the industry in years. 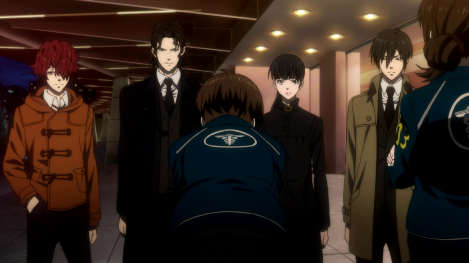 Like Kiseijuu, the second season of Psycho-Pass wastes no time in getting to the point and hitting the high notes. I’d of course be happier if Urobuchi was writing again, but he’s still listed as series supervisor, whatever that means. Shiotani Naoyoshi is also back in the director’s chair, which puts at least some of my fears regarding consistency to rest, while the others were by and large settled thanks to a solid first episode. I’ll leave any opinions about the sequel being better or worse than the original series until the anime has finished airing, but for now, I’ve been given no reason to think that Psycho-Pass 2 won’t make for a worthy successor. It looks great, it sounds great, and we’ve already got a well-established cast and an awesome dystopian universe to work with, alongside some new faces and a time-skip of about a year or so to keep things fresh. As one of my most anticipated shows of the fall season, I’m happy to say I’m not disappointed. 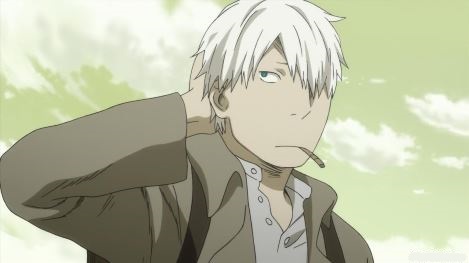 For the sake of fairness I haven’t put a score down for this, as part two of Mushishi Zoku Shou isn’t due to be officially aired until October 19th, but in all likelihood my score won’t be changing from the previous season – or from the first series come to that. There’s no doubt in my mind that Mushishi will remain consistent as it’s always been. While I’m aware that not everyone agrees, I believe this is a masterpiece not only of anime storytelling but of storytelling in general, and I have little to add about the show that I haven’t already mentioned in previous posts.

Question of the post: What’s the single best and worst title you’ve watched of the new anime season so far? Is the best title the one you predicted it would be, or have you been pleasantly surprised?