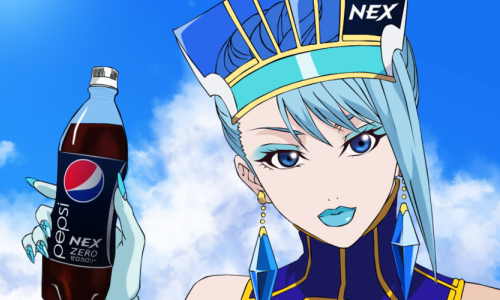 Over recent years, anime has steadily been utilising more and more product placement in their content. While live-action films and television shows are still far better known for doing so, a number of anime titles have been busy playing catch-up; Code Geass has its conspicuous tie-in with Pizza Hut, the Evangelion Rebuild movies heavily feature Yebisu Beer and Doritos, and Tiger & Bunny is of course renowned for weaving in big-name corporate sponsors such as Softbank, Bandai, and Pepsi into the central concept of its story.

I find I don’t really mind much – anime is as much a business as any other form of entertainment, after all. Decidedly more amusing, however, is when anime dishes out ‘fictional’ product placements in order to avoid using actual trademarks. Change just one letter and suddenly characters aren’t drinking Coca-Cola or wearing Adidas sneakers – they’re sipping on Poca-Cola and rocking the Abidas brand… with remarkably similar logo designs, of course. Titles set in real-life, modern-day Japan sometimes use a truly dizzying amount of laughable brand names, as in Durarara!! with Red Snake energy drink, Yahaha motorcycles, Mindows computer systems, Yohoo! search engines, Yo!Tube videos, and Amezon online shopping.

For this post, I’ll be counting down through my top 5 fake product placements in anime – proudly brought to you by Heireken beer and Smickers chocolate bars.

Technology-related products have been fair game in anime for years now, with fruit such as bananas and pineapples stepping in for Apple and systems that are apparently supported by Windoors and Wacintosh. Angel Beats! features possibly the most elaborate (and shiny) of fake computer product placements though, thanks to every single PC in the afterlife being run on Macrosoft Winding XO. Regardless of how well this product actually works, I think we can all agree it’s still preferable to Vista.

In the mood for a little nostalgia? Take a trip down memory lane and play Nokemon – completely unrelated to Pokemon, mind you. Sure, Nokemon Gold is a little outdated now, but don’t let AnoHana’s obnoxious store clerk shame you out of it; I’m sure its mascots are equally as adorable. And besides, it’s always really nice playing on something a little retro once in a while – beats the hell out of video games supported by the Blay Ztation 2 or Nendo CS, amirite?

Koca Kola, Caca Cola, and Cock Cola (especially that last one) are so overrated, don’t you think? So is Bepsi, by the way. Instead, you should definitely be imbibing Dk Pepper – the single beverage proven to be 100% effective for powering the brains of Great Mad Scientists the world over… or at least, all of them in the Steins;Gate universe anyway, which when you think about it is the only one that really matters. So shove aside your crappy Dr. Cinnamon and get those genius ideas properly flowing with the one and only intellectual drink for the chosen ones – probably on sale at your nearest maid café.

Craving a decent coffee? Not to worry, Toradora!’s Sudoh-bucks has you covered. Not to be confused with Starducks, Bear Bucks, Moonbucks, Starjackass (yes, really), or even Deathbucks, I have it on good authority that Sudoh-bucks beats all competitors out when it comes to both pricing and flavour. Needless to say, it’s also a far better taste than you’ll get out of any of those nasty instant coffee brands like Hescafe. As of this writing, Sudoh-bucks has not yet been sued, so I recommend getting some while you still can.

Oh sure, any anime these days can have a plain old WcDonalds – Cowboy Bebop, InuYasha, K-On!, Suzumiya Haruhi, and Ouran High School Host Club all do, and that’s just to name the first handful that spring to mind. But it takes a bit more dedication to not only come up with a different name but also have your main character (the demon king no less) actually work there for a living. Don’t be taken in by that cheap Sentucky Fried Chicken down the road – spending your hard-earned cash (which you may or may not have gotten from working at your local Docodemo call center) is easily the better option. I hear their Black Pepper Fries are to die for.

Question of the post: What’s been the funniest and/or most memorable fake product in anime you’ve seen so far?