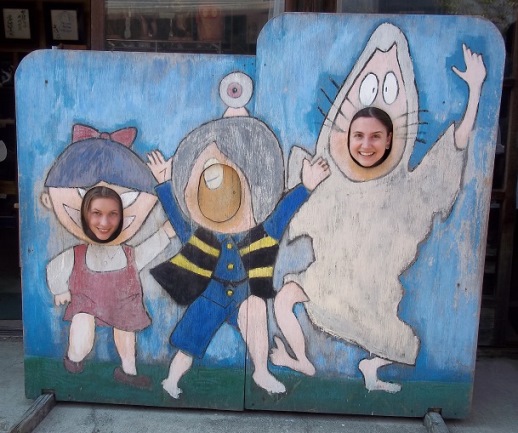 This three-part series about anime-based tourism is a collaborative effort between Artemis of Otaku Lounge and Buri-chan of San’in Monogatari. Artemis currently resides in Ehime Prefecture and since she likes to travel a lot, often discovers that she makes anime pilgrimages entirely by accident. She mostly writes about anime, with the occasional foray into Japanese music, street fashion, and general culture. Buri-chan originally became interested in Japan by watching the Odaiba episodes of Digimon Adventure, and already made that pilgrimage long ago. She currently resides in Shimane Prefecture and writes about Japan’s San’in region, including writing manga to introduce local Kojiki mythology.

So far, we’ve looked at how small towns thrust into the anime spotlight have maintained a healthy balance between tourism influx and their rural charms, as well as a few places that have direct ties to famous works but have not ridden those waves of fame along with them. Other times, however, anime culture seems to launch an attack of Gundam proportions on the landscape of the unsuspecting Japanese countryside.

Although many of his short stories were directly or indirectly inspired by his hometown and the surrounding San-in region, Mizuki Shigeru has gained inspiration from stories he heard and paintings he saw as a child, to the cultures of the Pacific Islanders he made friends with while serving in World War II, to the masks of African tribes he visited as an adult, following his vocation as an adventurer and folklorist.

He is better known for his work as a manga artist and writer, especially as the creator of Gegege-no-Kitaro, which is sort of like the Scooby-Doo of Japan in that its creepy content and iconic characters have transcended decades and generations, known and loved by Japanese people of all ways of life. However, Scooby-Doo likely does not have an international airport named after him.

The great works, adventures, and cultural contributions of Mizuki are celebrated in his hometown of Sakaiminato, at the north-western tip of Tottori Prefecture, with a population of 35,710 and a claim to fame that speaks for itself. For the residents and businesses along Mizuki Shigeru Road, Gegege-no-Kitaro is a way of life. Hundreds of bronze statues of youkai (roughly translated as Japanese goblins and ghouls) line the gift shop laden street, which has hundreds upon hundreds of Mizuki-style youkai lurking everywhere from street side murals to the insides of vending machines. 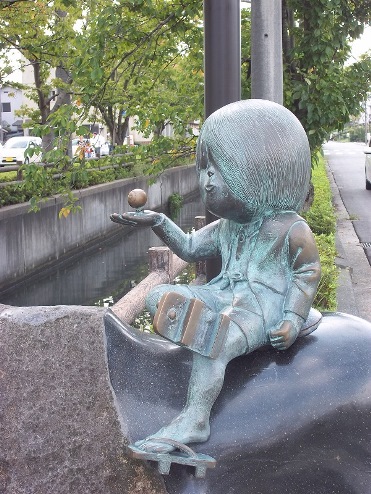 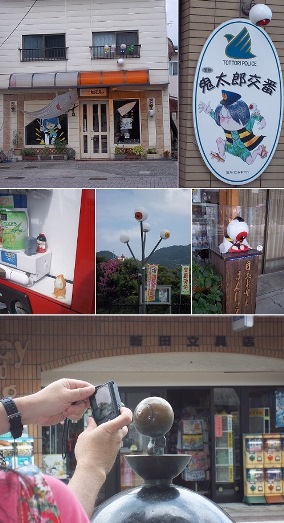 That having been said, Mizuki has long since moved away from the fishing port town, and resides in Tokyo. Other towns in Tottori have also tried to follow suit by celebrating the manga writers who hail from there, such as Detective Conan’s author Gosho Aoyama, and the prefecture has taken to promoting itself as the Manga Kingdom. This has not been a hit with everyone. Ubiquitous columnist, TV personality, and Mister Donut spokesperson Matsuko Deluxe, who is otherwise a big fan of the prefecture, has been openly critical of the campaign and insists that Tottori should draw from its natural wonders and true strengths to draw tourism as opposed to trying to make and ride a manga wave.

Some examples of anime cultural crashing into a local tourism might feel more familiar to fans worldwide. Kanagawa Prefecture’s Hakone occupies a strange space between touristy and spacious countryside. It’s a town rather than a city, and the backdrop is as pretty as they come, situated as it is near Mount Fuji and within the borders of a volcanically active national park. On the other hand, its proximity to the greater Tokyo area and wealth of hot spring resorts means that Hakone also attracts its fair share of visitors, both Japanese and international. Other local attractions such as its famous Shinto shrine, numerous art museums, historical highway checkpoint, and old mountain railway make Hakone a perfect spot for sightseers wanting to escape the constant hustle and bustle of Tokyo.

Over recent years, Hakone has also been getting a further surge of tourists thanks to its connection with what is probably one of the most well-known anime franchises of all time: Neon Genesis Evangelion. Hakone, and in particular the Lake Ashi area, was used as the model for the imagined post-apocalyptic city of Tokyo-3, and even if you aren’t visiting Hakone as an Evangelion fan, it would be next to impossible not to notice all the promotional material. The Hakone Tourist Information Center features Evangelion-themed posters, for example, and customized vending machines with themed drinks are scattered around the area. During the buildup to Evangelion 2.0, one of Hakone’s Lawson convenience stores was redecorated to sell exclusive merchandise, and Sengokuhara Junior High School, the school on which Evangelion’s was based, held advanced screenings of the film.

A new souvenir store called Eva Shop also opened in 2012, and the Odakyu Hakone Highway Bus Company ran an Evangelion-themed bus that same year, with official anime artwork decorating the outside and bus stops announced by the voice of Maya/Nagasawa Mika. A second Evangelion bus began running in 2014. 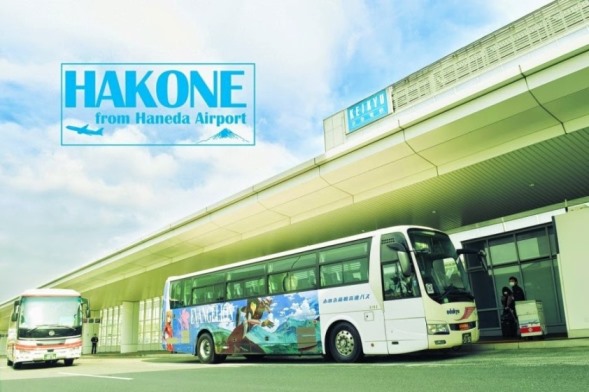 For fans making a trip to Hakone exclusively for Evangelion’s sake, an official “Instrumentality Map” map of the area is available in both Japanese and English – although the English version is not officially available online, and must be specifically asked for at Hakone’s tourist information center. The map, which is also available as a phone app, highlights the many sights that were used in the anime such as the school, the mountainside where Shinji and Misato view the whole of Tokyo-3 at sunset, the mist-covered mountain where Shinji wanders after running away from home, and the lake where the sixth Angel appears, among numerous others. For those who get tired simply of sightseeing, the Fuji-Q Highland theme park is about an hour and a half’s drive out of Hakone, where the photo-friendly Evangelion World attraction opened in 2010.

Perhaps famous places like Hakone would have been fine without the additional boost, but many places in rural Japan are scrambling to attract more foreign tourism as they experience population drains to city centers. There is nationwide preparation underway for an influx of tourists anticipated for the 2020 Tokyo Olympics. The real question is, how many of those tourists will leave the Tokyo region? Could anime be the hero that drives them to the underappreciated mountains, coastlines, and charming townscapes found throughout beautiful, rural Japan?

In recent years, policy makers seem more interested in encouraging anime pilgrimages rather than discouraging them. This could be merely coincidence – the number of anime set outside of the likes of Tokyo or Kyoto seems to be rising in general, as do the number of anime that actually specify a real-life location in Japan and then showcase that via featuring a shot of a famous shrine or including a DVD segment that introduces the real life charms. However, we do think the tourism industry is going out of their way to boost smaller, more local economies, as opposed to drawing attention to anime that take place in major metropolitan areas such as Durarara!! in Ikebukuro, or any of the perhaps hundreds of anime and manga scenes that take place at Tokyo Tower.

Plenty of overseas visitors and foreigners who actually live in Japan seem to be making these anime pilgrimages as well as Japanese people. Despite the country’s “Cool Japan” drive to introduce anime/manga/games etc. and apparent interest in promoting tourism in general, many of the info necessary to make these pilgrimages is either difficult to find in English or simply does not exist in English at all. This has caused quite a few English-language blogs to pop up over recent years, for fans to showcase not only their own photos from such pilgrimages but also to step in and fill the gaps in information, e.g. telling people what trains to take and providing specific directions around town.

If anime producers, the tourism associations of lucky locales, and policy makers want to embrace this potential, they have big questions to consider. What does it take to get people to spend the time and money to visit an anime “holy site”? International visitors have already dropped a lot of money to make it to the islands, so what will it take to get them to the settings of their favourite anime? Knowledge that those settings exist in real life? Ease of access? English maps and websites? Events and promotions? 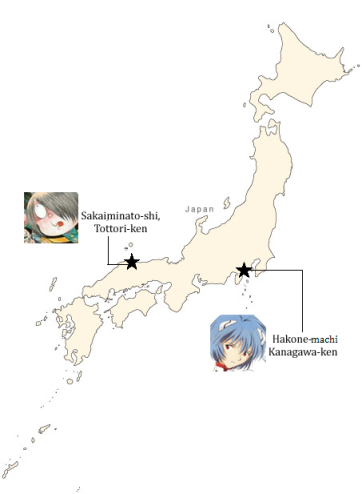 “Evangelion and Japanese Swords” on the attack in Matsue (Buri-chan, San’in Monogatari, 2014)
https://saninstory.wordpress.com/2014/11/21/evangelion-and-japanese-swords-on-the-attack-in-matsue/

This is where the customary question of the post would normally be, but I’m currently on vacation and likely won’t be checking my blog until I get back in early April. However, I’d still love to hear any general thoughts that people might have, and I’ll be going through the comments as soon as possible upon my return. In the meantime, I hope you enjoy this short article series.