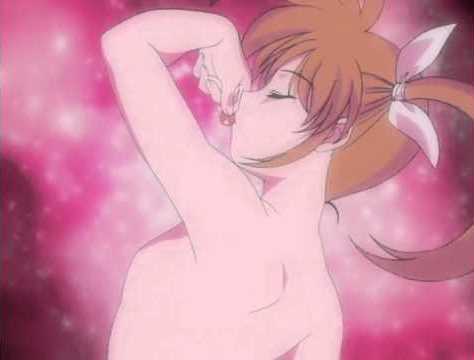 First up, let’s set the scene. Hark, an evil alien/brainwashed citizen/generic bad guy approaches! This is a fantasy show, so they no doubt have a variety of nefarious magical powers up their sleeve and would like nothing better than to wreak havoc on the heroine’s turf. As someone who stands for peace and justice, the magical-girl cannot possibly allow this to happen – but she is but an ordinary schoolgirl herself, and can do nothing without accessing her own magical abilities first. It’s transformation time!

She reaches for her handy pendant/brooch/pen/whatever and invokes some key phrase or other. Possibly this was taught to her earlier by a guide in cute animal form, or maybe she instinctively knows it because shut up she just does, but either way, she’s activated the crucial transformation sequence. Said sequence typically includes some or all of the following: a long, sparkly light show in which time is apparently suspended; being lifted into the air and spun gracefully around; being miraculously stripped of whatever everyday clothing she has previously worn; and becoming clothed in some kind of new, colour-coordinated outfit formed out of ribbons of magical energy. Time and gravity then reassert themselves, allowing our heroine to strike her signature pose and righteously vow to defeat her foe.

In a nutshell, this type of transformation is about discarding a mundane, civilian identity to take on an empowered, magical one. It takes place in a kind of sacred space, where time is virtually non-existent and the magical-girl is able to harness her true, inner powers (love, courage, friendship, etc.) and give them physical manifestation. The most well-known of these sequences no doubt take place in Sailor Moon (1992-97 and currently airing as a remake), but a variety of similar transformations are apparent in nearly every magical-girl anime title, including prototype Cutey Honey (1973-74), the Pretty Sammy parody series (1995-97), the ever-popular Pretty Cure (2004-present), and relative newcomers Genei wo Kakeru Taiyou and Fate/kaleid liner Prisma Illya (both 2013).

So complete are these transformations that to ordinary people, the magical-girl wielding her powers is apparently nearly always unrecognizable as the girl as she appears in everyday life, despite the fact that she usually wears no mask or any other conventional disguise. To the viewers, she simply gets a new outfit and accessories, but to everyone in the anime universe, her magical energy literally transforms her into a different person. (Once in a while there are exceptions to this rule as in Cardcaptor Sakura, whose titular character doesn’t really have a transformation sequence herself but instead transforms her magical key into a wand with which to access her powers.)

In purely practical terms, transformation sequences are also responsible for eating up episode time and saving money. Stock footage can be reused over and over again, and as soon as things get stale, the heroine can always simply gain a new and improved power, which calls for a whole different transformation sequence – likely along with a costume redesign to boot. Moreover, since it’s usually implied that the transformation sequence is basically instantaneous, it can be easily skipped over should an episode have plenty of other content to get through, or else stretched to its limit so that every magical character present undergoes the full rigmarole. Transformations can therefore take up anywhere from a couple of seconds of airtime to several minutes if there just so happens to be a whole team of magical-girls at the ready and some space that needs to be filled. 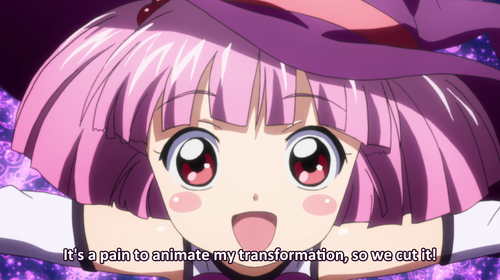 In those titles aimed primarily at a young female audience, the nudity during these transformation sequences tends to be emblematic of purity; it signifies the heroine becoming worthy of her powers, who must enter a magical, purified state to be able to properly wield them. In most of these cases, nudity is shown mainly in silhouette form and is likely not intended to be perceived as especially sexual in nature.

However, titles that are interested in deconstructing or subverting genre-normative stereotypes, such as Revolutionary Girl Utena, have transformation sequences with more sexually loaded connotations, and those aimed predominantly towards male audiences or which outright satirize magical-girl conventions are likely to be far more explicit. Compare, for example, a transformation sequence from Sailor Moon or Tokyo Mew Mew with one from Puni Puni Poemy or Kill la Kill. The former are fairly innocent affairs that have little or no interest in titillation – they’re targeted chiefly to pre-adolescent girls. The latter two are comedies aimed at older males, both of which consciously lampoon the magical-girl genre.

These days, it’s also not unusual to see magical-girl transformations parodied not only via gratuitous amounts of cleavage, but also through gender-bending. The likes of Dragon Ball Z is a good example of the male answer to magical-girl shows, with plenty of muscle flexing and subsequent clothes ripping, accompanied by heavy grunting and even an inexplicable change of hair and eye colour, but there are also several titles that are more or less exactly what a generic magical-girl show might look like if the main character(s) were teenage guys instead of girls. Star Driver, for example, is a mecha show with a male protagonist who gets a very magical-girl-esque transformation sequence nearly every episode, while Binan Koukou Chikyuu Bouei-bu Love! is essentially a whole magical-girl title in itself, whose cast just so happens to be made up of mostly effeminate high school boys.

In fact, so pervasive has the transformation sequence become over the years that even non-Japanese works sometimes feature them. Disney’s The Little Mermaid was one of the first American animated movies to involve a transformation sequence that’s markedly similar to that of an anime version of the same, and was followed up by the more tongue-in-cheek magical transformation scenes of Fiona in Shrek and Vanellope in Wreck-It Ralph. American TV shows have likewise gotten in on the action, such as when Invader Zim’s GIR begins his transformation sequence, only to pause midway and step into his dog costume before zipping it up and walking away offscreen.

For both good and for ill, anime is a form of entertainment which is very much reliant on traditional codes and conventions to in order to convey narrative or lend symbolic significance – many of which are specific to certain genres. While there are certainly magical-girl titles which don’t rely as heavily on transformation sequences to carry the show along, they’ve become such fixtures of the genre that it’s all but impossible to imagine a magical-girl show that’s utterly devoid of them. However, as they’ve been developed, subverted, and parodied over time, it can at least be said that some transformation sequences have taken on a life of their own, and that they will always be appreciated by those with a penchant for pretty girl warriors with hearts of gold.

Question of the post: Are there any magical-girl transformation sequences that have really stuck out to you or that you count as favourites?