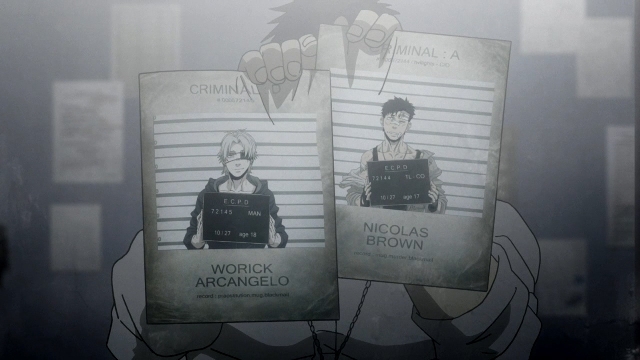 I’d normally do my follow-up taste testing post around the season half-way mark, but as I’ll be overseas and computer-less the whole of August, I thought I might as well get it done a bit earlier before I left. Incidentally, this is Otaku Lounge’s 100th post! A big thank you to everyone who’s helped and encouraged me so far, and I hope to write many more posts in the future.

So – on the last exciting episode of anime taste testing, I promptly dropped a bunch of shows (Classroom Crisis, Rokka no Yuusha, Ranpo Kitan, Charlotte), but ended up keeping more (Working, Junjou Romantica, Durarara, Non Non Biyori, Shirayuki-hime, Gangsta). For those who suggested I was being too harsh, particularly in regards to Charlotte, I actually did find the time to go back and watch the next two episodes of this, as well as of Rokka and Ranpo Kitan. The verdict: I still didn’t like any of them. I also thought about watching at least one more episode of Classroom Crisis, but honestly found the first one so dull that I just couldn’t force myself to go through with it.

As an additional note, I did indeed watch the first couple of episodes of Makura no Danshi/Pillow Boys, my notes on which can be read here for anyone who’s interested. 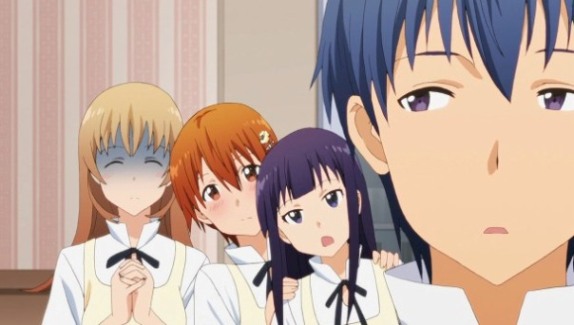 I’ve been pleasantly surprised by the fact that some progress is actually being made on the potential romantic relationships this season. While I don’t especially care for Souta/Inami (mostly because I don’t especially care for Inami), I have to give the series props for finally going somewhere with this. As for Satou/Yachiyo, now there’s a pairing I can get behind. I don’t expect the anime to go so far as to make these pairings official regardless of what goes on in the manga, just as I don’t expect the anime to ever have Yamada meet her brother or Otoo meet his wife, but it’s still nice to see the show stop dragging its feet quite so much. Otherwise, Working continues to just do its thing in the same vein as the first two seasons – and that’s just fine with me. 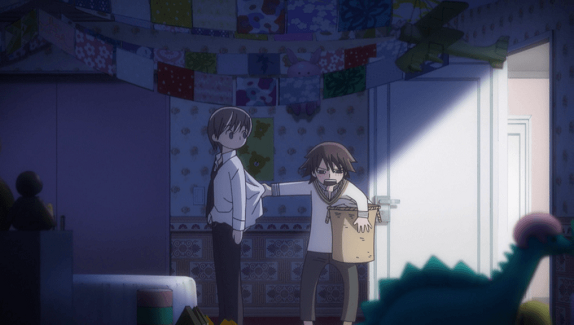 Again, I’ve been pleasantly surprised by some of the developments here. Granted, Misaki is just as indecisive and flustered as ever, and Usagi is just as unhealthily possessive, but the former is actually showing signs of maturity and forethought, and is even being (gasp!) straight with Usagi when confronted with some direct and serious questions about his future. The slight change in art style is fine too, and I think subtly complements Misaki’s character growth by making him appear a little older than in the first two seasons. 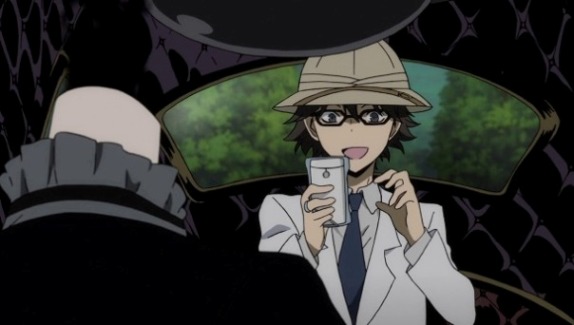 One of my complaints from the previous cour is that the cast had become too large for the show to be able to keep up with everyone, even though the characters were being rotated fairly regularly. The same problems exist this season, to the point where Kida, Anri, and even Mikado are playing second fiddle to new and supporting characters like Aoba, Varona, and the Awakusu group. That being said, most everyone in this show is either amusing or just plain weird enough to make every episode enjoyable regardless of who the focus is on – Durarara is in no danger of becoming stale. It also gets bonus points for getting Simon back in the show; I swear I missed that man almost as much as I still do Kida. 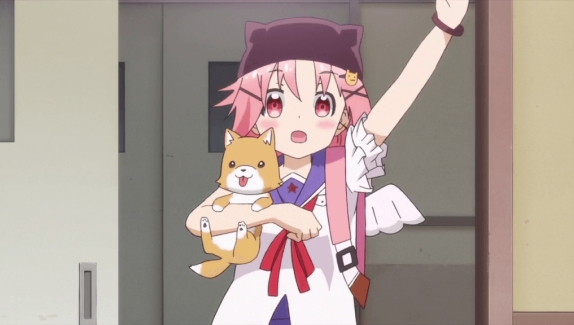 SPOILER WARNING! If you’re going to watch this – and I highly suggest that you do – DON’T look up the synopsis beforehand. Just watch the first episode before reading anything at all about it.

I ended up trying this one out after seeing a few comments on other anime blogs about the place, and I’m sure glad I did. The twist at the end of the first episode was basically ruined for me by the time I got there, but that didn’t make it any less cool to watch. I’ve seen moe blended with horror before, most notably in Higurashi, but where Higurashi lacks coherence and is poorly executed, Gakkou Gurashi is actually pulling it off. By far the best thing about it is that the audience is unable to tell what’s reliable knowledge and what’s not. Even without the visual cues, it’s creepy enough just to be aware that much of what’s happening is seen from the viewpoint of someone who has blinded herself to reality. I don’t doubt that there’ll be some more terrible surprises further on down the track as more is revealed about our main character’s mental state. 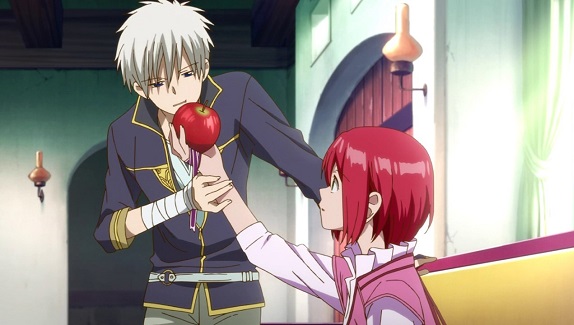 I’m enjoying the fairly light-hearted and episodic nature of this series, and I wholeheartedly approve of the lack of theatrics – I honestly can’t remember the last shoujo romance I saw that involved so little melodrama. While I don’t expect Shirayuki-hime to be an especially unique or innovative show in terms of story, the show as a whole comes across as fresh, cheery, and just really easy to get through. And yes, it’s been said before by plenty of people, but I’ll say it again: Shirayuki is an excellent and wholly likeable character. She’s upbeat, she’s determined, she’s smart, and best of all, she’s absolutely capable of forging her own path ahead. Even better, we’ve learned that Zen is just as capable of backing off and allowing Shirayuki to make her own decisions without interference; a rare thing indeed when it comes to anime couples. 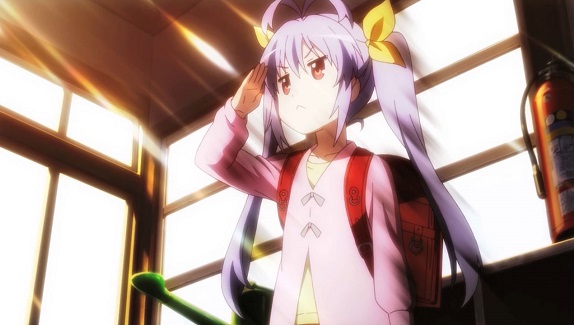 I actually like this season more than the first one. Maybe it’s the comparative lack of Hotaru’s downright creepy obsession with Komari, or maybe it’s that I’ve fallen even more in love with the visuals, if such a thing is possible. Either way, Repeat is a joy to watch, and this is coming from someone whose tolerance of moe and cute-girls-doing-cute-things shows is fairly low. Even if this anime doesn’t sound like your cup of tea, I highly recommend it to anyone who has even a passing interest in the Japanese countryside, especially given that you don’t need to have watched a single episode of the first season. The artwork and attention to detail really is just that good, not to mention surprisingly accurate. 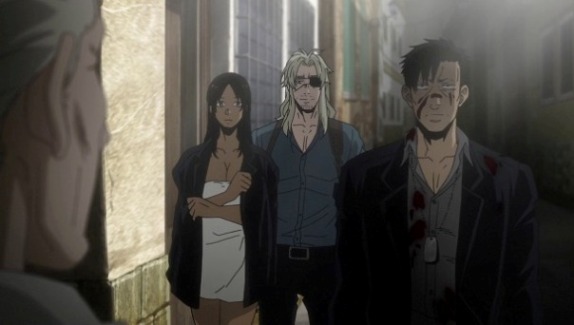 This is still the title I most look forward to watching each week. It’s by no means perfect – the supernatural elements are a totally unnecessary aspect of the show for one thing – but Gangsta is an otherwise surprisingly grounded and at times even subtle anime that’s a lot of fun to watch. Nic and Worick make for some of the most compelling and unique leads I’ve seen in some time, with Nic communicating primarily through sign language (and said sign language actually being supervised by the Tokyo Federation of Deaf) and Worick being a one-eyed male gigolo. I’ve got nothing against the action scenes, but this series is definitely at its best in its quieter and more reflective moments, when the inner lives of these characters, as well as the general atmosphere of the piece, have the chance to really shine.

Question of the post: Have there been any major surprises of the season so far? Did you end up changing your mind about any titles after the first couple of episodes?