It says boys love on the tin, but that’s a lie. Which is a shame, because given how insipid most of the content is, I can only imagine that Uragiri wa Boku no Namae wo Shitteiru (geez, what a mouthful) would be a better show if it had any real yaoi material rather than just teasing at it.

What almost makes things worse is that the overall story has plenty of potential. Yuki, an orphan with empathetic and healing abilities, finds himself caught up in the struggle between the Giou Clan, whose members all have supernatural powers, and Duras, demons who feed on the darkness within human hearts. It might sound similar enough to several other anime out there, but the twist is in its themes of reincarnation. Yuki, always born female in his past lives, was previously very much in love with Luka, himself a powerful Duras who is now allied with the Giou Clan. As you might imagine, this makes for a pretty interesting relationship – both characters are essentially still bound by love and by oath, yet Yuki is now a high school boy and has no recollection of his past life.

This specific plot point should probably have been the focus of the entire show. Just think – a fantasy title that deals primarily with the romantic relationship between two men, both of whom sincerely care for each other, yet one of whom has to face up to the complications of gender and soul transmigration. It needn’t involve any more sexual content than the series already features (which is to say, pretty much none), and could become a downright progressive piece of work for not just the boys love genre but for romance anime as a whole. Sadly, Uraboku never really goes there. The romance between Yuki and Luka is certainly hinted at and occasionally even explicitly mentioned, but the main focus is nearly always on the far weaker action/adventure aspects of the show – which sound cool at first but are usually executed so poorly as to feel downright anticlimactic. The action sequences are often overly drawn-out and melodramatic, the fantastical battles sometimes surprisingly lackluster, and not even the large and varied cast with enough emotional issues to write their own fanfiction can save Uraboku from being not only a little tedious but also unconvincing. 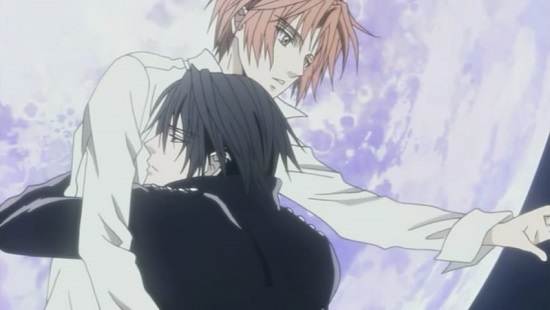 I give particular reference to the cast because if it wasn’t for the uneven pacing that Uraboku also suffers from, a few of the characters might have been enough to elevate the show from ‘embarrassingly bad’ to at least ‘meh, I guess it’s okay.’ Sure, Tsukumo and his older sister Toko could probably have been erased from the story completely without much affecting the chain of events, Tachibana’s hat is more interesting than the man himself, and I seriously question the sanity of naming Luka’s familiar Sodom. I also have to mention Yuki here again, if only because he sounds like he has severe nasal problems at all times. However, childhood friends Hotsuma and Shuusei are both genuinely compelling characters in their own right, to say nothing of their mutual bond resulting from past dealings with their magical abilities. Kuroto and Senshirou, while both introduced too late in the game to have as big an impact, make for intriguing additions to the team as well, and as head of the Giou Clan, Takashiro has one of the more engaging storylines of the piece.

In contrast, the majority of the villains simply don’t live up to expectation, and rather than add any meaningful conflict or suspense to the story, they bring the tone of the whole thing down. These are supposed to be hugely powerful and beguiling demons who can take on human form in order to tempt and deceive their enemies, but they’re ultimately even more contrived than their ‘goth’ outfits and do nothing in themselves to help offset their cliché dialogue. Our main villain has a getup that makes him look a cross between a visual kei band member and a Nazi officer, but even so might have been taken more seriously than the other baddies were it not for the fact that X/1999 already pulled the same Best Friend/Destined Enemy™ plot point a decade earlier, and did so a thousand times better. It’s not that I disapprove of the angst-fest, but at this point, the scenario has just become too overused to carry much emotional clout.

The thing is, all these problems could be overlooked if Uraboku didn’t seem so determined to play everything straight. I’d enjoy a title like this one far more if it stopped taking itself so seriously and went absolutely all out with its campiness. God knows it already has the trappings ready to go: blood-red roses, both black and white feathers flying everywhere, mangled wooden crosses sticking out of the earth… and that’s just in the OP. However, it’s not enough to push things into parody territory, just like sleeveless leather trenchcoats, ostentatious goth jewelry, and moody rock music isn’t enough to carry a series on its own. Uraboku’s look and general style may well appeal to some viewers (especially angsty teenage girls – not that there’s anything inherently wrong with that mind you), but this is just window-dressing for a show that otherwise fails to make any kind of major impression.

It’s a far cry from the worst anime I’ve ever seen, but in short, Uraboku is nowhere near as dark or as badass as it thinks it is. Although a handful of decent characters and a couple of good ideas stop it from being downright terrible, this still isn’t a series I can in good conscience recommend to anyone. If you’re looking for something with a similar kind of atmosphere then try Kuroshitsuji: Book of Circus instead.

Question of the post: Have you seen Uraboku, and if so, what are your thoughts?