By and large, young kids in anime annoy the hell out of me. Dealing with children in the real world? No problem, bring it on. But seeing small children in anime? Ugh, no thank you. I’m not talking about anime targeted towards the same age group, mind you – I have no issue with kids in titles like Doraemon, Youkai Watch, or Hamtaro. What I typically have a dislike for, however, are elementary school-aged characters in anime targeted at a wider audience… mostly because they act and sound nothing at all like their age.

To some extent, the latter can’t be helped. Even the most talented of voice actors are bound to have trouble sounding like a 6-year old when they’re really in their 30s, and actual children voicing major roles in anime is something of a rarity. Still, there’s just something incredibly grating about hearing an obviously fake and exaggeratedly high-pitched voice coming out of the mouth of a first grader, particularly when they laugh. It gets even worse when said first-grader says or does something that I can’t imagine anyone that age actually saying or doing, and which I notice particularly when a scene is designed to come across as ultra-cute and/or emotionally moving.

There are definitely exceptions to this though, and I can think of several excellent young child characters that play major roles among otherwise older cast members. Of course, ‘young’ can be a pretty vague word, so for this article I’ll be limiting my examples to anime characters that are still under the double digits. (Sorry ‘bout it, Chiyo.) 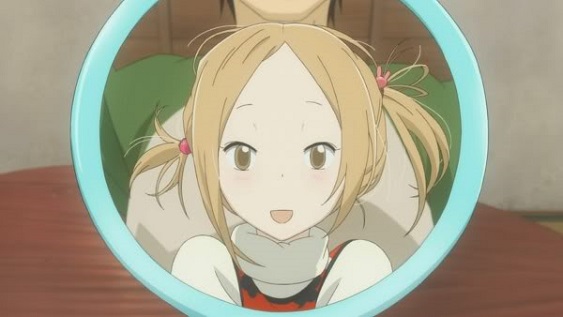 Six years old throughout most of the series, Rin takes the cake for adorable anime children who I not only don’t want to kill but are actually genuinely cute. The illegitimate daughter of Daikichi’s grandfather, Rin understandably takes a while to come out of her shell and learn to socialise with anyone besides Daikichi. However, after the stability and security that Daikichi offers allows Rin to gain in confidence, she blossoms into a very mature and independent young girl, obviously kindhearted but not shy about voicing her opinions (and bossing Daikichi around when need be). After discovering a fondness for cooking, she’s often seen trying to take charge around the kitchen despite her small size. Needless to say, her voice is spot on thanks to voice actor Matsuura Ayu, who was about ten years old at the time of Usagi Drop’s release. 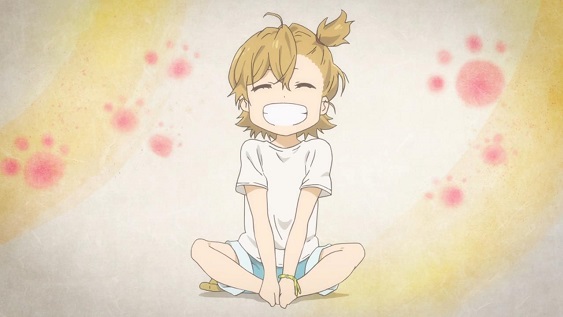 A seven-year old who lives alone with her grandfather, Naru is about as energetic and bubbly as they come and is like a burst of sunshine on screen, particularly in contrast with Seishuu’s often very antisocial personality. Despite not seeming to grasp the concept of personal space, Naru epitomizes some of the very best yet realistic qualities of young children – she’s cheerful and generous, and adventurous and mischievous without being purposefully rude. Her sheer love of life is infectious, and her habit of imitating the speech or behavior of those around her – even when she doesn’t really understand it – makes for plenty of hilarious scenes. Her confident and straightforward personality means that she has plenty of friends, both girls and boys, and that she gets along well with absolutely everyone. Like Usagi Drop’s Rin, Naru’s characterisation is greatly helped by her voice actor, Hara Suzuko, who would have been around nine years old when Barakamon was first airing.

Aged six throughout most of the series, Renge is the star of the show for many viewers, and it’s not difficult to see why. A highly curious and precocious child, Renge is friendly but spends plenty of time entertaining herself, whether it’s wandering around playing her recorder or attempting to train her ‘pet’ tanuki. Despite her normally completely blank expression – she gets surprised sometimes and very occasionally sad, but is never once seen to smile – Renge is an affectionate child who loves both people and animals and is easy to like and laugh at in return, particularly when her naturally trusting nature makes her the target of some good-natured pranks. Her habit of inventing new words and nicknames (nyanpasu!) can be pretty cute too. Her voice actor, Koiwai Kotori, is in her 20s but does an admirable job of giving Renge just the right high-pitched but somewhat husky pitch.

First introduced at age three and six years old by the end of the series, Elicia is utterly adorable – and not just because her father (nooooo!) is even more so when he’s gushing about her to anyone who’ll listen. Enthusiastic and generally just all-around cute and lovable, Elicia doesn’t deal with or fully understand the death of her father very well, crying for the strange men at the funeral to stop burying him so that he can get back to his work, and running to the door later on in the series when she hears a knock and thinks her father has returned home. However, Elicia still does her best to comfort her likewise grieving mother, and remains an innocent and sweet-hearted girl. Fukuen Misato, in her late 20s during Brotherhood’s release, does sound a little too mature for the role but turns out a strong and fairly convincing performance nonetheless.

Studio Ghibli has always depicted fantastic child characters no matter their age, but Mei is one of the very youngest of them, and is about as cute a four-year old as has ever been seen in anime. Mei’s lively curiosity means she is the first character in the film to meet Totoro – probably fitting, given her innocence, much like only the purest of children are meant to be able to see unicorns – and is completely unafraid by the ginormous creature. It’s clear that Mei loves her family very much, and although upset by her mother’s prolonged stay in the hospital, loves to play with her older sister and naturally charms her father (and pretty much everyone else) with her sweet and unselfish personality. Voice actor Sakamoto Chika would have been about 29 years old when My Neighbor Totoro was released, but Mei’s voice comes across as beautifully natural and perfectly in-character at all times.

Question of the post: How do you feel about young child characters in anime? Do you have any favourites that didn’t make this list?