Apologies for being a bit later than usual with this. Still trying to figure out life and stuff. And also my wifi, Because Japan. As usual, the following opinions are based purely on the first episode of each show and are ranked from worst to best. 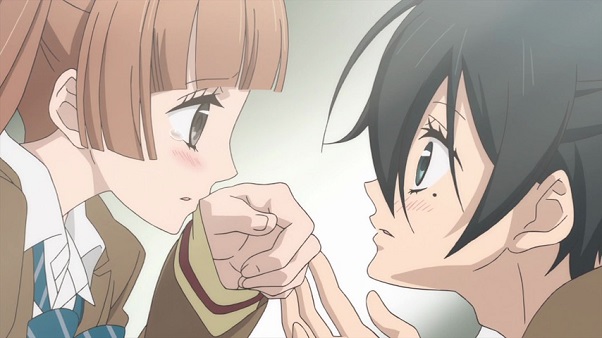 Wow this is terrible. Seriously, I’m really struggling to think of any redeeming features whatsoever here. To start with, the writing is appallingly bad: every single line of dialogue is so hackneyed and melodramatic that the whole thing could just about be a parody of itself; the aaaangsty backstories feel like nothing so much as thinly-veiled excuses for the characters to behave like assholes; and the story keeps jumping around from one scene to another seemingly at random. In fact, the pacing is such that the events of this first episode alone could probably be stretched out over an entire season. The god-awful singing and truly eye-watering art style is just the icing on the cake as far as I’m concerned, with the former used to almost laughably bad effect and the latter looking like a reject of 90s. How such a show even got made in the first place is completely beyond me.

For an anime with an interesting enough synopsis (even if the whole time-travel thing is getting a bit tired at this point), this was a really boring premiere. The entire episode just felt so incredibly bland that I’m actually struggling to recollect anything that happened at all, everything from the characters to the artwork was that flat and flavourless. Which is pretty weird when you think about it, because Sakurada Reset doesn’t reek of wish-fulfillment tropes or shitty fanservice like so many shows based on light novels do, and you’d think the guy who directed Non Non Biyori and Tanaka-kun wa Itsumo Kedaruge would know how to inject some life and warmth into even the slowest of stories. Oh well, can’t win ‘em all I guess. 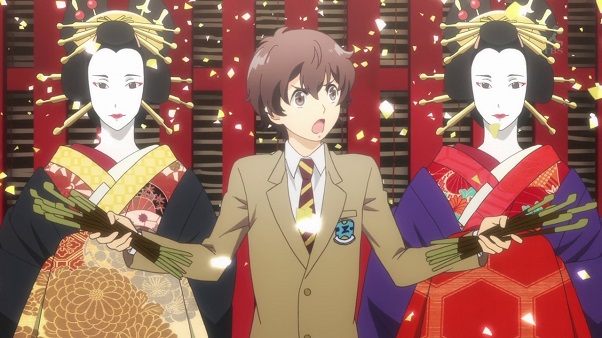 I imagine I would’ve been all over Kabukibu if it wasn’t for the setting. There’s probably no way to kill a potentially interesting topic more quickly than to center it around a high school club, and unfortunately that’s exactly what we got. The premise of one guy/girl and their bestie forming some kind of school group, then immediately having to hunt down and convince other people to join said group, has not only been done to death at this point but also been done far better – so while I didn’t particularly dislike anything I saw here, I also saw nothing at all to suggest that Kabukibu would be any different from every other bland school club-centric anime ever made. The kabuki itself is just the outer shell for the kind of title we’ve all seen literally hundreds of times before. And not that it matters overmuch in this case, but since I could say exactly the same thing for all of the technical aspects like art and music, I see little point in investing any more of my time.

And here I thought Japan was over its Lewis Carroll fetish. To be clear, there’s nothing overtly sexual in this set-up, for which I’m profoundly grateful – although also to be fair, there’s still a disproportionate number of cutesy prepubescent girls wandering around, to say nothing of the Lolita-esque costumes, which is at the very least enough to make me roll my eyes and wish Alice to Zouroku had gone with something a little less on-the-nose. Actually though, my major problem with this series is the tonally inconsistent feel, which the artwork certainly doesn’t help. I can forgive poor production values if the writing is decent enough, but a) I don’t think it is, particularly and b) terribad CG aside, I just don’t think the art style suits the rest of the series at all. It’s like the writers thought they were making one show and the artists thought they were making something else entirely. The result is a relatively serious and even potentially quite dark story in terms of content, but with character designs that seem like they’d be more at home in some random slice-of-life/moe schoolgirl show. So although I didn’t hate what I saw, I can think of far better things to watch in what little spare time I currently have.

Don’t get me wrong, I have nothing against Shingeki no Kyoujin. Well, except for the fact that most of the characters seem like either incredibly dumb or objectively terrible people, and that all of them scream 90% of their dialogue, and that the human race would more than likely have gone extinct long ago under such abysmal strategy and leadership. For the record, yes, I know I’m probably missing the point and yes, despite the sarcasm, I too am able to suspend my disbelief in favour of some decent action sequences and the odd fun plot twist or two. I watched all of the first season after all, so I guess I must have enjoyed the series to at least some extent. However, the fact remains I don’t care quite enough anymore to continue watching at this point – so rather than be that annoying person who’s always pointing out the flaws in the story and generally raining on everyone else’s parade, I’m just going to bow out here and pretend I don’t know what people are talking about.

This isn’t my favourite sequel this season, but I’m reasonably sure it’s going to be a decent one, provided Favaro FAVAROOOO shows up at some point and that the show can keep the fanservice below a certain threshold. There aren’t many action/adventure anime titles out there that manage to keep me consistently entertained, but the first season of Bahamut was a wonderful exception, and with the same staff behind season two, I see no reason why I shouldn’t enjoy it just as much this time around. Of course, chances are if you didn’t enjoy Genesis then you won’t enjoy Virgin Soul, since in terms of basic product I’m pretty sure they’re going to be almost identical, but I for one am happy to sign up for that. 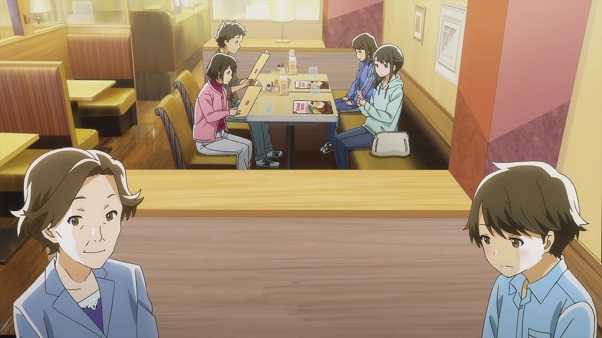 For an episode in which basically nothing happened, this is an unexpectedly fresh start to a potentially very decent series. School-centered slice-of-life shows certainly aren’t an oddity, and there’s probably nothing in this one that brings anything new to the table in terms of content, but what is perhaps slightly unusual is the way it feels so incredibly down-to-earth. There’s nothing affected or exaggerated going on with the characters and their lives; rather, I have absolutely no problem imagining every single scene taking place in reality exactly as it plays out here. These are just teenagers being their awkward teenage selves, all doing their best to figure out how to navigate their way through everyday life with their dignity and sense of selves intact. That may not sound incredibly exciting, but the show staves off boredom by switching points-of-view rather than staying focused on just one or two characters. I also really appreciate seeing the characters interact with their respective families – parents included – and in ways that feel just as natural as the rest of the series does. Add to this the almost complete lack of inner monologuing (or indeed the lack of any unnecessary dialogue in general), plus an art style highly reminiscent of Hourou Musuko, and I think we’ve got a winner here.

Weirdly enough, I didn’t actually enjoy the first season of Uchouten Kazoku all that much back when I first tried it out, but the show eventually grew on me and I ended up loving it. There’s just something about the vibe and energy of the piece which appeals to me, and I find that its unique brand of comedy mixes strangely well with the often reasonably serious subject matter (namely, a literal game of life and death for everyone’s favourite tanuki family). As with Shingeki no Bahamut, I think everyone basically knows what they’re signing up for with this sequel, especially if, like me, you’re a bit of a Yoshihara Masayuki fan. Plus, I still really like the soundtrack.

Question of the post: What were the single best and single worst premieres of the spring season for you? Any titles you think I’m definitely missing out on?