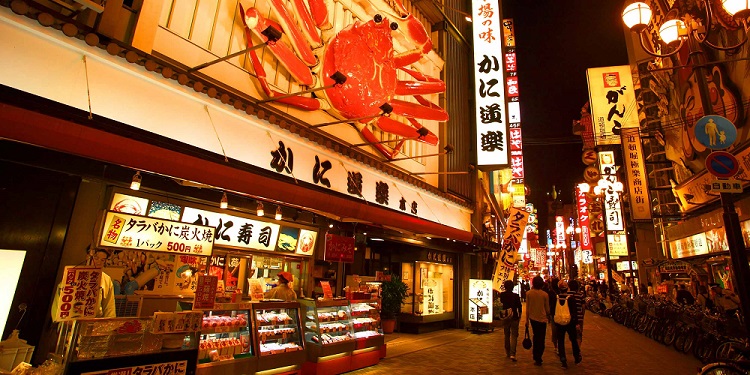 One of the best things about travelling to a new place is the food. Sure, checking out the museums, art galleries, observatories, and other famous landmarks is cool, but food plays an equally significant role in the cultural landscape – particularly if you’re confident enough to try for some of the more locally known rather than tourist-heavy spots.

Japan is of course no exception. While this article won’t be dealing with any specific Japanese dish (I’m sure readers are perfectly capable of looking up things like okonomiyaki, yakitori, and tonkatsu on their own, to say nothing of the instantly recognizable names like ramen or sushi), it should provide a decent introduction to the broader types of restaurants common to Japan. As with a previous article here on Otaku Lounge focusing on accommodation, I’ll be going over some of the most frequent traits these places are known for and talking about the ups and downs of having a meal there. 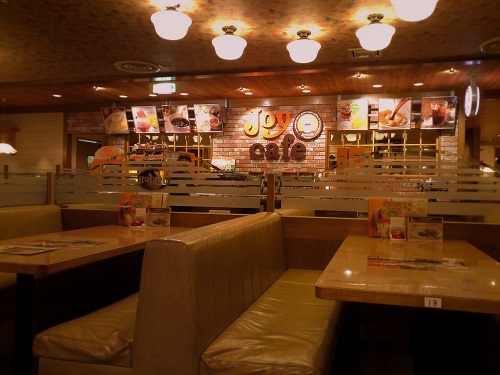 Let’s kick off with an easy one. Family restaurants are casual dining restaurants that welcome any and all types of customers but, as the name implies, are especially geared towards families with children. As you can imagine, this means the food is reasonably cheap (it’s easy to get a large meal with unlimited soft drinks here for under 1000 yen), and most also serve a good mix of both Japanese and Western-style food, desserts included. It’s not the flashest way to dine out and they’re somewhat lacking in atmosphere, but one of the best things about family restaurants is how accessible they are. Many are open 24 hours, 365 days a year – particularly the biggest chains like Joyfull, Gusto, and Denny’s – and can be found not only in major cities but also in rural areas along the main road, perfect for a pit-stop. They’re also one of the most accessible types of restaurants for non-Japanese speaking foreigners, because the menus tend to be well-illustrated and sometimes bilingual as well. (Incidentally, if you overlook the actual staff, the anime series Working!! gives a spot-on example of the typical family restaurant setting.) 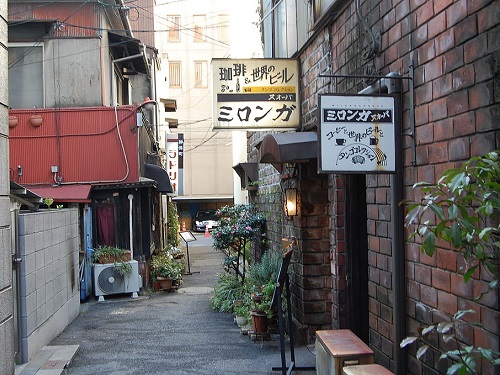 Slightly different to Japanese cafés, which are usually geared towards the more fashionable crowds (particularly young women), kissaten are usually older, more retro in style, and nearly always serve proper food as well as drinks and dessert-style snacks. These often include full set meals around lunch time – for example pastas, salads, sandwiches, and Japanese-style curries – but another common feature of kissaten is their ‘morning service’ breakfasts. Especially popular among salarymen before regular work hours commence, morning service (usually something like a thick slice of toast with butter/jam, a boiled egg, and a tea/coffee for 500 yen or less) is a great way for anyone to catch something cheap and easy for breakfast without resorting to yet another convenience store run. Sure, the latter will offer a lot more variety and are often open 24 hours, and cafés might be fancier or trendier, but kissaten are generally the cheaper option for a similar amount of food. 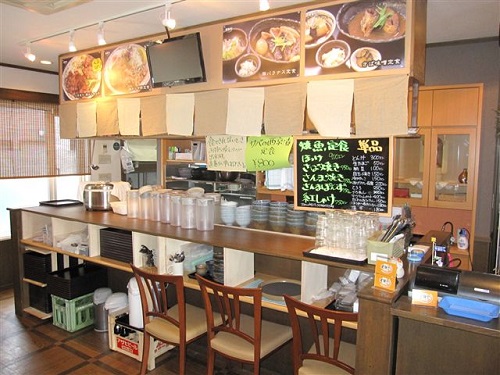 Teishoku means meal set, and so teishoku-ya are diners that serve Japanese-style set menus. This usually means a bowl of miso soup, a bowl of white rice, a small dish of pickles, and the main dish of meat, fish, or other kind of seafood like fried shrimp, generally all for 1000 yen or less. Teishoku-ya are usually most popular around lunch time, when salarymen and blue-collar workers get their break and crowd in for a quick and cheap but hearty meal. They’re often quite small and local, family-run establishments, so don’t expect anything that’s overly spacious, flash, or modern, and do expect to need to sit around low tables on tatami mats rather than around Western tables and chairs. Teishoku-ya might not be especially foreigner-friendly in terms of spoken or written English, but they offer an extremely laidback atmosphere – and long-running neighborhood teishoku-ya are basically an institution unto themselves, so they can also make for a genuine cultural experience. 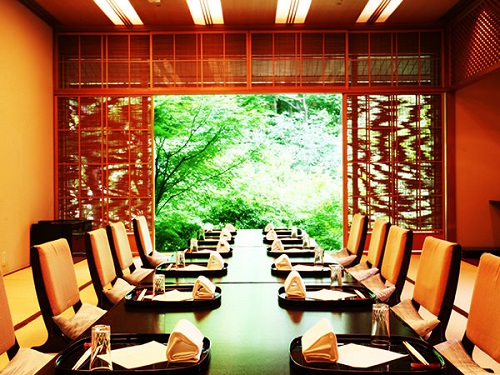 If you’re a tourist, then chances are you won’t be stumbling into one of these places even by mistake, because ryotei are the kind of place that even the majority of Japanese people don’t just head out to dinner to on a whim. It’s not just that ryotei are expensive – spending around 20,000 yen here is par for the course – it’s that they’re also by nature exclusive. Traditionally, these types of restaurants only accept new customers by referral, meaning an already established customer needs to introduce and vouch for you. Ryotei have a pretty long and impressive history dating back at least as far as the 1700s, and while they’ve evolved a lot since then, the air of aloof luxury and classically Japanese sense of taste still remains. Privacy is another keyword pertaining to ryotei; financially well-off but otherwise unremarkable individuals are part of the clientele list, but so are groups of politicians and high-level businessmen, where such meetings can take place discreetly and without fuss – potentially with the additional services of professional geisha. 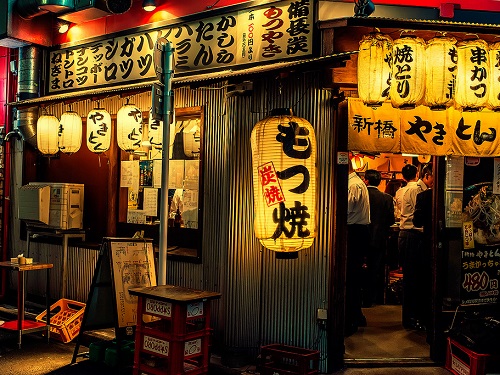 Probably the most popular kind of general restaurant when it comes to eating out for dinner in Japan, the izakaya might be best described as a pub – albeit one that’s a little different from what the English word may suggest. Usually very informal in style, izakaya are most often frequented by groups of people and, unlike most other restaurants, serve up a lot of small dishes to share around the whole table rather than larger, individual servings. The food is ordered and served throughout the course of the meal rather than all at once and the bill added up at the end, allowing for a slow and relaxed eating pace. Expect a lot of finger foods like edamame and skewers of meat as well as chopstick-friendly dishes like salads and sashimi, though admittedly this is only the tip of the iceberg – there’s typically plenty of variety to be had at these places, both food and drink-wise. Although some izakaya offer Western-style seating, customers usually sit on tatami mats in rooms sectioned off by thin walls or screens, where parties can get fairly rowdy – particularly if they’ve gone for the two-hour all-you-can eat/all-you-can-drink set price option. Izakaya can get a little on the expensive side, especially since custom calls for a small appetizer to be served before you order anything (i.e. the entry/table fee), but the bigger the group, the better off your wallet when it comes time to splitting the bill. Depending on how much you intend to party, that usually comes to somewhere between 2000 and 4000 yen per person. 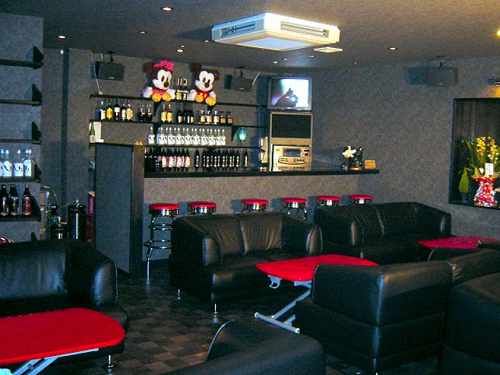 But where does one go after it’s time to leave the izakaya? If you’re Japanese (probably male) and feel like tottering off to the after-party, likely a snack bar – or just snack for short. This is basically a kind of neighborhood hostess bar by another name, although unlike an actual hostess club, these types of places typically don’t charge an entry fee and the female staff are a lot more toned down. Snacks are technically restaurants rather than bars because they serve food as well as drinks, and many of them are perfectly socially acceptable places to be seen at, but they’re certainly not to everyone’s taste; middle-aged men in need of some well-rehearsed pampering are the most common form of clientele – though it’s worth a note that as an obviously foreign woman, I’ve never been turned away. In any event, expect a lot of very pricey drinks, copious amounts of cigarette smoke, and plenty of drunken karaoke for the whole bar to hear. You can tell the regular customers apart from the casual pop-ins because they’ll have an entire bottle of whisky or whatever with their actual name on it, kept up on the shelf alongside all the other bottles for the next time they happen to call. 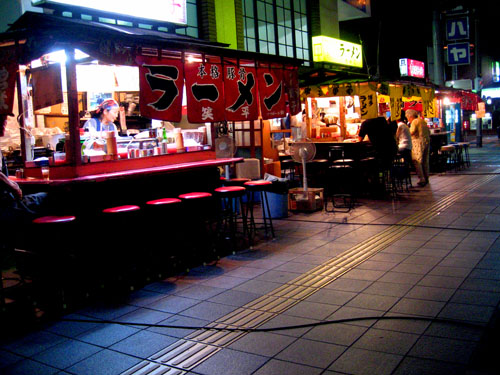 Finished at the izakaya/snack/karaoke bar but not quite ready to head home? Or maybe you’ve just got a hankering for a late-night dinner. Either way, heading to a yatai – a small, mobile food stall most often serving simple, hearty food like ramen, oden, and smaller side-dishes like gyoza and skewers of grilled meat – might be just the thing. Set up on or near pedestrian walkways in major urban areas and removed again in the early hours of the morning (opening hours tend to be from around 6pm to around 2am), yatai can be a great place to rub elbows with the locals since they’re casual, cheap, and atmospheric. They’ve certainly evolved somewhat since the Meiji Period when vendors pushed around their food on wooden two-wheeled carts, but the vibe is still quite reminiscent of old-school Japan, especially since yatai usually only cater to a maximum of about ten people at a time (so if you’re in a touristy area of Fukuoka where yatai are a well-known part of the cityscape, you might have to wait your turn). If you’re drinking as well as eating then you can expect to spend around 2000 yen, but otherwise a decent bowl of ramen can usually be had for as little as 300 yen.

Question of the post: Had any notable experiences at any of these types of restaurants in Japan? Or if you haven’t had the opportunity, which type do you think would be most up your alley?