On the last exciting episode of Anime Taste Testing, Dive!! was awful, Konbini Kareshi was boring, and Katsugeki Touken Ranbu still wasn’t the decent game-to-anime adaptation we all dreamed about finally getting. That still left a few titles on my weekly watch-list though, including the new addition of The Reflection. Read on to see my latest impressions for seven different shows and then feel free to either laud or laugh at my opinions in the comments.

Oh what a difference another episode or two (or in this case, another minute or two) can make. My only major complaint after seeing the premiere of Hitorijime was that it was a little on the bland side. I noted then that it felt completely unlike a BL show at all, and could easily have been mistaken for a generic, high school-centric slice-of-life series if you didn’t check the synopsis first. Unfortunately, episodes two and three dived straight into the creepy, manipulative, and downright abusive tropes that BL is so well known for. Not in graphic detail, mind you – this is still rated PG13, after all – but it was more than enough for me… and that wasn’t even counting the other, teacher/student ‘romance’ going on, which I can only assume went on to be the main focus of the series. One day I hope to watch some new and halfway decent BL again, but just because such titles are exceedingly thin on the ground doesn’t mean I need to watch stuff like this instead.

I cannot for the life of me figure out why this show is so popular. I actually dropped it after the first episode, largely bored and irritated with the schoolgirls-as-spies-in-loli-uniforms antics. However, after seeing the praise heaped upon it by plenty of other anime bloggers out there, I not only re-watched the first episode to try and work out what I’d missed, but also ended up making my way through the next couple, even though I was still considerably less than impressed. And frankly, I still don’t get it. The action is decent enough whenever there actually is any to be had, but the storytelling strikes me as average at best, bogged down by dumb anime tropes and suffering from one of my biggest pet peeves – thinking it’s a lot smarter than it really is. Princess Principal is far, far from the worst anime of the season, don’t get me wrong, but I honestly see little to genuinely praise here beyond the soundtrack.

I was inclined to go easy on this one since it differs so much from the norm, even for a historical fantasy piece, but I guess what I really wanted to see was something with a bit of subtlety. What I got instead was some bad attempts at world-building, a few unexceptional action sequences, and cartoonish villains of the “mwa-ha-ha!” variety – the latter of which you’ve got to admit is pretty weird for a show that also seems like it’s trying to be a relatively serious political drama. To be clear, I don’t necessarily think Altair is a bad series, and once again, I have to applaud it simply for standing out among many of the rest of the titles airing this season. But I gave it four episodes just to be on the safe side, and combined with the fairly lackluster production values, there’s just not that much here to make for an especially compelling story. 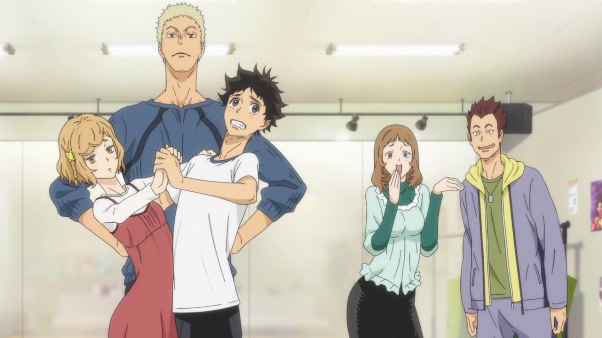 Somewhere, buried under all that tropey shounen sports material complete with underdeveloped female characters, fanservice dressed up as comedy, and laughably portrayed dancing skills of the INCREDIBLE! NATURAL GENIUS variety, is a decent series. Unfortunately, it’s rarely given the chance to breathe, and all the genuinely good or entertaining material mostly just ends up as isolated moments in an otherwise weirdly generic show that should be anything but. I also have a bone to pick with the visuals. The artwork itself is fine – not really my thing, but undeniably distinctive and stylish – yet animation-wise, it seems oddly lacking. I have no idea what kind of budget Ballroom is working with, but you’d think an anime about competitive dance would want to show off the actual dancing, at least during the major moments. This isn’t just a matter of recycling scenes – it’s a matter of rarely animating more than a few seconds of dance and then just cutting to everyone’s reactions to prove how spectacular it apparently looks. It’s a shame, especially after a pretty competent premiere, but I’ve now seen up to the end of episode five and Ballroom just isn’t living up to its potential.

I’m glad I watched more of this. In hindsight, the sick feeling I got after eventually getting around to the first episode possibly had more to do with the fact that I was already actually kinda sick that day, as opposed to the purposefully exaggerated and downright ugly visuals to which I then attributed my nausea. Granted, Kakegurui usually wouldn’t be my cup of tea anyway, what with its outlandish fanservice, completely over-the-top reaction scenes, and blatant style-over-substance approach to storytelling, but it’s also so intentionally campy that I don’t mind any of this anywhere near as much as I otherwise almost certainly would. The setup is ludicrous, the story (for lack of a better word) at times makes no sense at all, and every single character is either an objectively terrible human being, a complete and utter psycho, or both at once. I can’t pretend I’m not entertained though, even though I should most likely be just plain offended – and while I’m not sure what that says about my own character, I guess at least there are plenty of other anime viewers in the same boat?

I’m still a little on the fence with The Reflection. Partly that’s probably to do with the fact that I’m incredibly over superhero stories, and have been for the past couple of years now, and partly because while my impressions of the first episode were quite good, the following two felt quite a bit weaker in terms of writing. That said, I certainly don’t dislike what I’ve seen so far here. I’m no comic book fan but the idea of Stan Lee teaming up with the director from Mushishi is intriguing, and love it or hate it, there’s no denying that the choices with regard to art style are both bold and distinctive. Dismissing the show simply because it’s ‘not anime enough’ would be a really ignorant and immature position to take, especially since the story itself has the potential to be far more interesting than almost anything else airing this season. So while I’m not exactly sold yet, there’s no way I’m writing The Reflection off this early in the game. 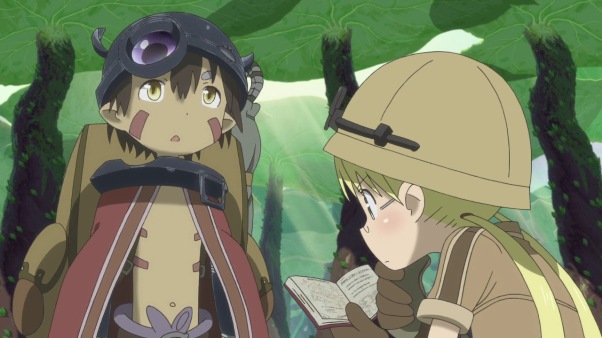 Easily still the best new title of the summer season, Made in Abyss continues strong at five episodes in, delivering a solid dose of childlike wonder with its fantasy/sci-fi adventure outlook, alongside a fascinating yet unsettling undercurrent thanks to its surprisingly dark setting. The pacing so far has been fairly deliberate, each episode another step in the journey downward, but now that much of the world-building has been established, the main cast looks about ready to expand. I’m sensing there’s a lot that Made in Abyss is saving up to reveal at a later time, but given that the series hasn’t yet put any major foot wrong, my anticipation there hasn’t been soured. I’m still just as excited, if not more so than I was after the first episode, to see exactly where Made in Abyss is going to take us… and exactly what we’re going to be confronted with along the way.

Question of the post: How’s the summer anime season going? Now that we’re nearly at the halfway point, have there been any major changes for you since the premiere episodes?

Note: This will be my last post for the month since I’m now on summer break. I’ll still be around to reply to comments and such, but otherwise will see you guys in September. Have a good one!