Now that we’re roughly at the halfway mark for the majority of shows airing this season, it’s time to check in with how they’re doing after the initial impressions. Even after dropping Sengoku Night Blood, Ousama Game, Tsukipro, Net-juu, Two Car, Code: Realize, and Garo: Vanishing Line very early on, this season was still pretty stacked, so I was particularly interested to see how it would fare after the shows had been given time to settle. 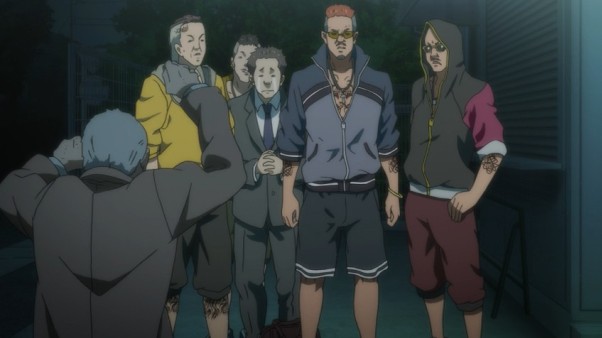 I felt let down, though not surprised, with how Inuyashiki developed after the first episode. This creator really seems to have a fetish for portraying teenagers and young adults as thugs, gangsters, and psychopaths, and while there were hints of that in episode one, the next couple really went to town on it. While I can appreciate some of the messages the show is trying to get across in relation to issues like bullying, wilful ignorance, and social apathy, I just don’t have the stomach for titles that a) wave them around with all the grace and subtlety of a sledge hammer and b) integrate them with so much graphic violence and explicit visual horror. I finished Gantz back in the day mostly because I was morbidly curious as to how each episode would manage to outdo the last in that way, but I just don’t have enough patience to do so all over again here.

For all the really cool ideas that Houseki no Kuni tosses around, it didn’t seem to actually do much with them. To be clear, I think I gave this series a decent chance to prove itself, but after four episodes, I still didn’t feel that it delivered on any of its potential. I would have loved to see more importance placed on the setting, for example, and on specifically how and why the gems came to be fighting with the moon dwellers. I would also have liked to see more of an emphasis on the whole genderless beings thing and what impact that’s had on the society the gems themselves have presumably formed (especially since the gem master is obviously the odd one out here). Unfortunately, the series seems primarily interested in showing off how much of an adorable klutz our main character is, and the action scenes only ever seem to serve as a way of breaking up the monotony rather than creating any real tension or building up the stakes. Basically, Houseki no Kuni is a show that I wanted to like a lot more than I actually did.

This show is all too predictable at this point (if you’re really curious about who’s going to come out on top, just take a look at the order of the actual zodiac signs and then compare it to the order of deaths in the anime), but it’s still reasonably entertaining. Dumb, yes. Trashy, absolutely. The dialogue is fairly poorly-written as well – in fact, the writing as a whole isn’t good enough to even be called imaginative at this point – and the action scenes are serviceable but let down by the obviously low budget. That said, Juuni Taisen is still plenty of fun to watch, mostly because the series just doesn’t have any interest in taking itself too seriously. In other words, it’s exactly the kind of thing I’m looking for when I come home from a long day at work and just want to switch off my brain for a bit. I can understand if it’s not everyone’s cup of tea, and frankly it usually wouldn’t be mine, but even I’m down for a mindless popcorn show once in a while. 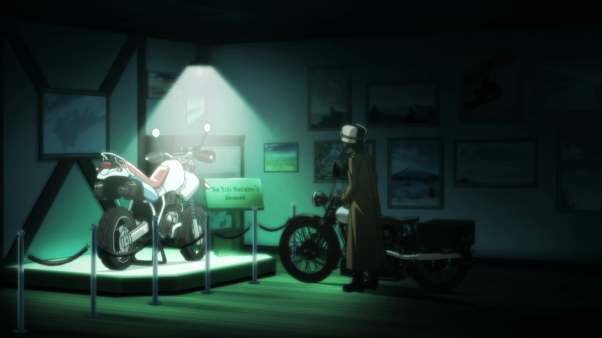 There’s nothing wrong per se with this adaptation of Kino’s Journey, but for some reason I’m usually left with a vague feeling of disappointment after each episode. Sure, it’s visually nice to watch, but something about the show just doesn’t quite feel right. A couple of the episodes have definitely been off in terms of the moral of the story, that’s for sure. The original Kino’s Journey anime worked so well because not only did Kino not take a moral side, but mostly neither did the stories themselves. While this version’s Kino doesn’t usually take action, that’s not the same thing as not making a judgment call, and it’s normally fairly obvious what both the character and the stories are trying to get across. That doesn’t make it a bad show, of course, but it does make it come off second best by contrast. And while I’m fully of the opinion that an anime should be judged purely on its own merits and not in comparison to any other work, that’s pretty difficult when some of the episodes are simply being retold instead of being completely original stories.

I’m still quite enjoying this series, and although I can’t say it’s particularly original (at this point, there’s very little a school-based slice-of-life anime that’s striving to be completely realistic can do to be original), I can still thoroughly appreciate how very grounded and faithful it is to… well, to real life I guess. Sometimes that can be a little exasperating, because there are teenagers acting like teenagers and attempting to navigate the whole first crush thing in true Japanese style (i.e. a complete lack of nearly any direct communication), but on the whole all the characters are actually likeable enough. More to the point, the situations they find themselves faced with now that they’re about to graduate high school and the way they choose to deal with them ring true – sometimes painfully so – and that’s usually the main reason I like watching these kinds of shows.

Sadly, I think Kujira no Kora has fallen in narrative quality a bit over the most recent couple of episodes, primarily because now that it’s more interested in the plot than in character development, there’s been a noticeable dip in the writing. The show’s also taken a turn for the shounen in a few ways – people are making decisions that don’t make much sense except in terms of plot convenience, fight scenes are preceded with monologues, and big motivational speeches help to band everyone together while the music swells triumphantly in the background, just so we all know what a rousing moment it’s meant to be. There was something simple but effective in how the story was being told over the initial first episodes, but now that things are actually happening, it’s as if the series has forgotten how to show instead of just tell. On the other hand, I’m still curious enough about the story and emotionally attached enough to two of the characters to want to keep watching. Plus, the visuals are still gorgeous.

I don’t have too much more to say about Kekkai Sensen than I already have. It’s just a fun, addictively energetic ride that doesn’t have any overarching narrative thus far but is perfectly satisfying to watch on a weekly basis. The atmosphere is still spot on and I’m enjoying these episodes that hone in on the side-characters who got a little left out over the course of the first season. I don’t know if the story’s going to get more serious as we head in to the second half, but I honestly wouldn’t mind if it stuck only or primarily to these purely episodic shenanigans, which are very easily digestible and pretty entertaining in their own right.

While I’m still very much a fan of Osomatsu-san as a whole and its particular brand of sometimes very smart but very crude social humour, my critique is basically going to be exactly the same as with the previous season. When it’s on, it’s on and no holds barred. When it’s off, the jokes just fall flat and, as with any show made up solely of bite-size comedy sketches, you never know what you’re going to get until you’re actually watching. The result can be an extremely mixed bag, although I’m far less likely to enjoy those sketches in which side-characters like Iyami, Chibita, or Hatabou are the main characters. Thankfully, the sextuplets are still very much the stars of the show and as long as things stay that way, Osomatsu-san should be just fine. 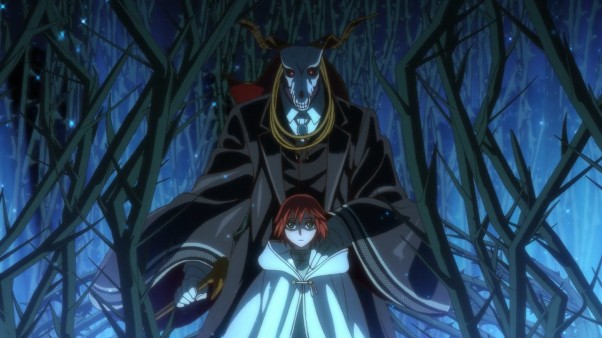 This is going to sound a little strange since Mahoutsukai no Yome is far from a fast-paced action piece, but I wish the show would slow down a bit. I guess what I mean by that is, I hope the series won’t get too bogged down in the mysteries, the dangers, and the antagonists and end up forgetting the core characters in the process. I’d like to see some breathing room just to have Chise, Elias, and Silky all in the same place and getting to know one another properly, instead of having everyone constantly running around and having to deal with the various magical threats that come their way. As much as I enjoy seeing more of the universe these characters inhabit, if there’s no chance for proper character development and solid relationships to form then the series will lose a lot of its inherent charm. And there is a lot of charm here – in terms of overall story, it’s still one of my favourites of the season. It’d be a shame to see even a bit of that go to waste by not giving the emotional heart of this show the attention it deserves.

This is almost like the real Kino’s Journey of the season. I get that it might be too slow (and more or less completely noneventful) for some viewers, but personally I love that hardcore slice-of-life feel combined with the post-apocalyptic setting. It means the series has some very real messages to convey without either shoving them in the audience’s face or making the anime too pessimistic to be enjoyable. If anything, I’d say the show takes a largely optimistic tone; our characters are just too young to either know or properly remember a time when things were any different, and so each episode is largely about them discovering new things like the taste of fish, or reveling in the simplest of joys like the sound of the rain (though there’s no guarantee it’ll stay that way). At the same time, the audience is about as ignorant as the characters are in terms of the world they inhabit and how exactly it ended up like that – and I’m not even sure whether or not I want to be given the answers. All that goes unspoken is a huge part of the appeal for me. 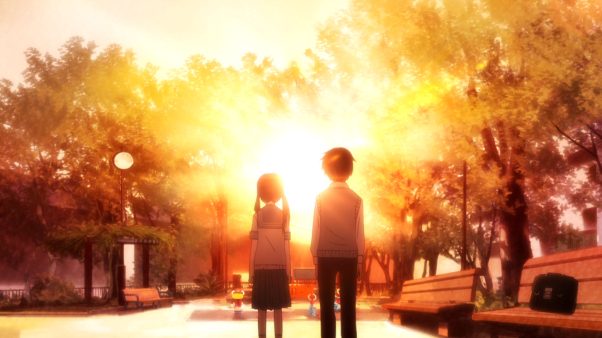 I was almost ready to say something about the last season being a bit more emotionally hard-hitting, and then wham, along came the most recent couple of episodes and I was ready to either hit someone or sob into my pillow – possibly both. 3-gatsu no Lion’s best work comes along not when shogi is the main focus, but when Rei himself, the Kawamotos, and their relationship is. The Kawamoto family brings such a huge burst of warmth to the show that I’ve become completely attached to all of them, and I’m pretty sure Rei wouldn’t be anything like the person he now is without them. If 3-gatsu no Lion continues to bring this kind of impact on a regular basis, it may well be in the running for best show of the year.

Question of the post: Now that we’ve reached around the halfway mark of the season, are there any shows you’ve drastically changed your mind about since your first impressions?