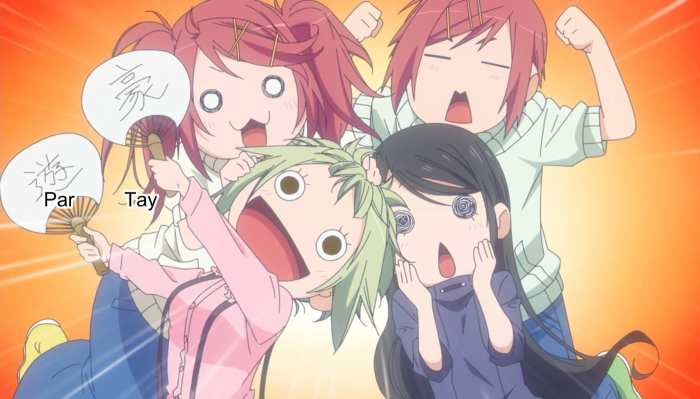 Wow, there’s a lot going on this season – in total, I’ll be looking at over 20 titles – so unusually, I’ll be splitting my initial anime taste testing post into two parts. This first one will cover those titles released from April 1st to April 7th, and the second will be out around this same time next week to cover all the rest. Also unusually, I’ve decided to write about each anime in order of official release date rather than in ascending order of score this season, just for a change of pace. Enjoy! 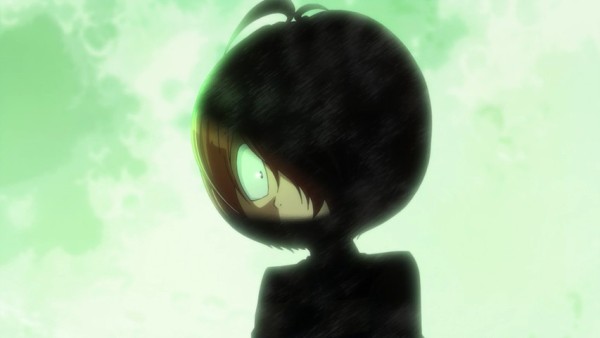 Gegege no Kitaro is proof that family-friendly horror can be done, and done pretty well at that. Truth be told, I’ve always had a soft spot for this franchise – it’s one of those classics I have a lot of respect for, especially given my love of youkai-centric stories. The premiere episode was certainly a decent enough start, combining sufficient levels of creepiness with the kind of low-level, G-rated action I imagine will play well with its target audience, and bringing the plot up to date with a nice nod towards how far media and technology has come since Gegege no Kitaro’s debut back in the 60s. While the show is a little young and typical shounen-feeling for my tastes, I’m genuinely happy to see a reboot and hope it’ll be a success. 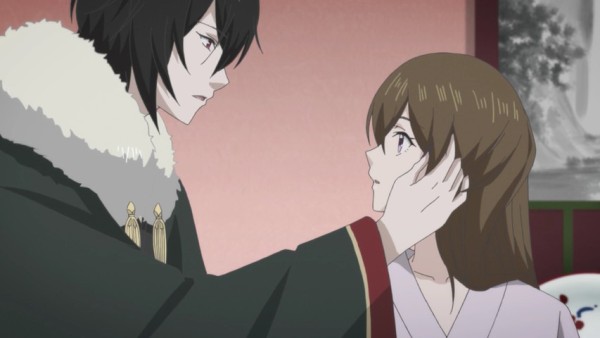 There’s nothing particularly wrong with Kakuriyo no Yadomeshi, but nothing particularly right either; mostly it felt like I was watching a generic, downgraded version of Ouran High School Host Club, only played straight instead of being a comedy and with demons in place of hosts. The creep factor is (relatively) minor given that our main character is a college student who clearly has a mind of her own, but this doesn’t change the fact that her grandfather effectively sold her into marriage to settle his debt. I could probably get over that if the foreshadowing weren’t so painfully obvious, making Kakuriyo no Yadomeshi not only unimaginative but also predictable as far as the end game is concerned. It could certainly be worse, but given the sheer amount of choice on offer this season, I’d rather watch something I have some real enthusiasm for. 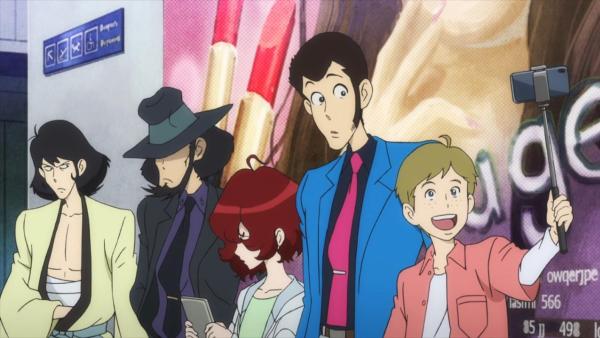 I enjoyed much of the previous Lupin III anime TV series back in 2015, and from the first episode of Part V, it looks like we’ll be in for another rollicking good time. This time the primary setting is France, and there’s also a distinct focus on modern-day technology and mass media in terms of general theme. While the latter point at first sounded like it could play as more gimmicky than anything else, it was actually worked in very well with the introductory story, and involved enough real thought that it didn’t come across as just some randomly picked plot device to try and appeal to the kids. I’m also a fan of the show’s general energy and enthusiasm, which has just the right combination of dumb character hijinks combined with a slightly more mature sense of genuine sex appeal. I don’t know if Part V will be able to keep this up for the entirety of its 24-episode run, but so far I like what I’m seeing. Incidentally, don’t be afraid to jump right in if this is your first experience with the Lupin III franchise – like each of the individual shows, this one is clearly designed as a stand-alone production in terms of the overall narrative. 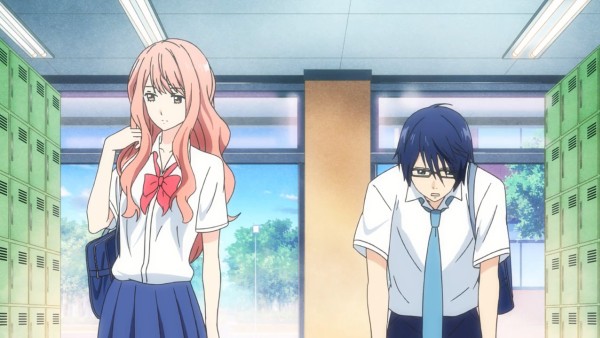 The cringe is real. Look, I have no particular issue with stories about otaku guys learning to deal with real world romance. However, the main character here is just so openly dripping in his disdain for women that I desperately wanted to backhand him the entire episode. I get that this is probably at least partially the point – that the story will have him develop Actual Feelings for Actual People – but his logic for initially disliking his no doubt eventual love interest is not only insulting but also completely warped. He describes said high school girl he’s never directly spoken with until now as sloppy and promiscuous (I guess because she’s a straight-talker rather than the timid and blushing or feminine gossip girl type?), and incidentally, she herself spends the majority of the episode being pretty kickass… only to let herself be dragged away with little more than a token verbal protest by some guy with severe entitlement issues – giving MC-kun the perfect opportunity to fight on her behalf. He loses the fight spectacularly, of course, but wins a kiss for his valiant actions. I can at least give the show kudos for keeping any fanservice completely out of the equation, but surely we can set the bar a bit higher than that? Combined with the breakneck pacing (seriously, it felt like we got about half a season’s plot development packed into one episode), I’m more than happy to forget this exists. 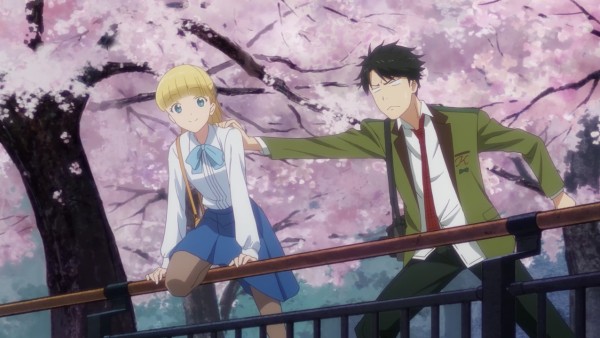 While I didn’t exactly dislike what I saw of Tada-kun, I also came away from the premiere with a feeling of vague disappointment. I’ve long been of the opinion that any work of fiction should be judged purely on its own merits, but it’s hard not to have high expectations of an anime when the studio has set such high standards for itself in the past, and I’m sorry to say that Tada-kun just didn’t deliver on them. It’s not that I was expecting a wonderfully absurdist comedy rather than a more conventional romance per se, but rather that I was expecting something with more uniqueness or creativity. Instead, I was let down by a bunch of stereotypical clichés which, despite being well-polished, said and did nothing to make them anything more than that. Basically, I was watching something that came across as high quality, but which at the end of the day was nothing I hadn’t seen literally hundreds of times before. It’s a shame, because I think all the raw elements were still there – they just didn’t play out in any way that was new or entertaining enough to be actually interesting. 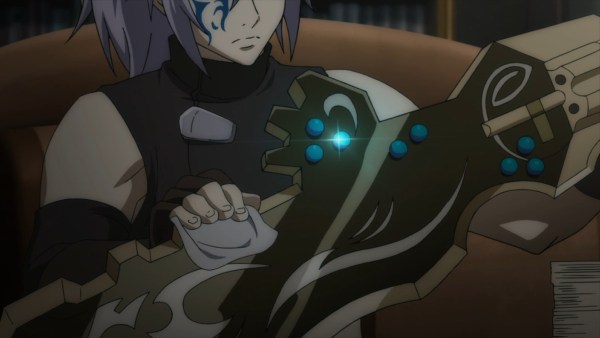 To say the premiere of Dragons was exposition-heavy would be a huge understatement. It was more like the episode was entirely made up of expository writing – even the action scenes, which must take some kind of weird talent in and of itself. I’m not necessarily saying this title is completely bereft of decent ideas, but if there are any, they’re buried beneath the avalanche of other, far less inspiring ones, to say nothing of the show’s crappy excuse for world-building via overlong narration, random terminology, and lackluster dialogue. Also, while nowhere near as bad as, say, Magical Girl Site, I get the distinct feeling that the creators of Dragons sat down one day and thought to themselves, “Hmm, now what are all the Cool Kids into these days? Because my plan is to combine ALL OF THOSE THINGS and then my story will surely be a hit.” In other words, I had no idea that this was based on a light novel before I watched it, but became acutely aware that this was likely the case after the first two minutes. Sadly, I’m in no way exaggerating for effect, and needless to say am not about to go back for more. 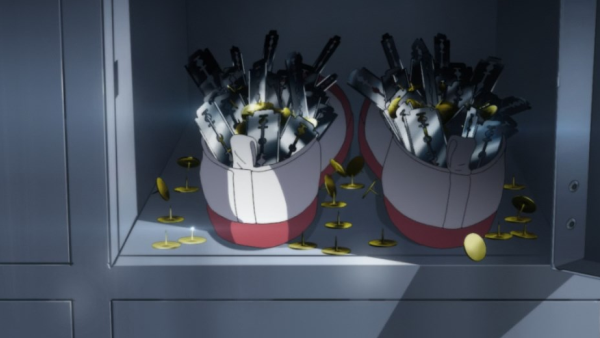 Once in a while, an anime comes along that tries so hard to be edgy and grimdark, and is so relentlessly over the top in story and tone, that I can’t help but laugh at the sheer ridiculousness of it all. That’s Site in a nutshell, and I have nothing at all positive to say about it (other than that the fact that it provided me with enough entertainment to literally make me cry with laughter by the 5-minute mark – after that, my response was mainly disgust). The show doesn’t make up for any of this in terms of its technical prowess either – in fact, some of the animation looks shoddy and low budget enough to have been fan-made, which I admit also made me laugh even though that clearly wasn’t the intent. This is by far the worst series I’ve seen in a long time, and comparing it to the likes of Madoka Magica or even its inferior successors like Day Break Illusion would be an enormous insult. If you value your integrity (or even just your sanity), for the love of god find something else to watch this season. 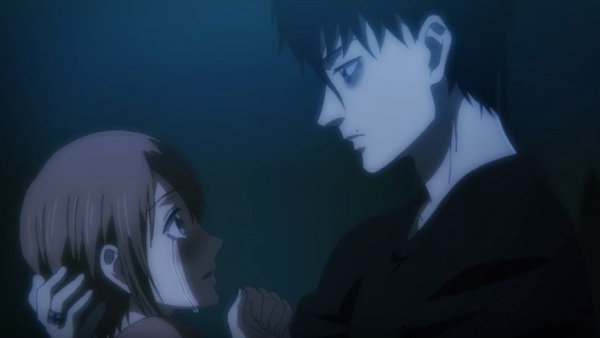 I’ll be real with you guys, I didn’t make it past the first half of this episode and only have a rough idea of where it went after that because I started randomly skipping until the conclusion. That’s how bored I was. On the one hand, I have trouble completely condemning a show if I didn’t even finish the premiere. On the other hand, I was just so struck by the generic-ness of literally everything about Devils Line, from the story to the visuals, that I didn’t even have the patience to sit still for another ten minutes. I think that probably says something of significance in and of itself. Anyhow, assuming you’re still not over the whole vampire romance craze (didn’t that end three or four years back?), just know that Devils Line adds absolutely nothing new to the genre (think a combination of a poor man’s Tokyo Ghoul and Twilight), and that the animation is pretty terrible to boot. 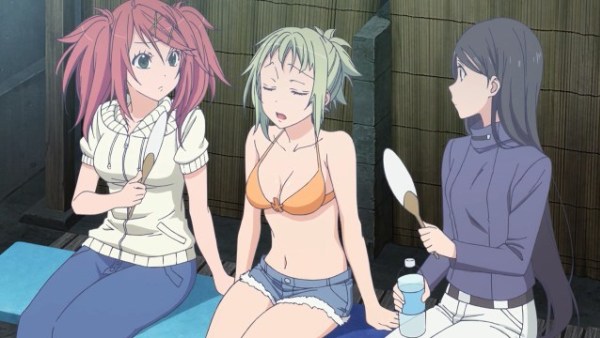 I don’t feel that I need to write too much about this one, as I foresee it as being fairly similar to season one (which I eventually ended up writing a review on – feel free to browse). And that’s certainly not a bad thing – if you’re after something sweet, peaceful, and easy on the pacing, look no further than Amanchu!. It’s essentially about two things, scuba diving and friendship, and the latter probably even more than the former given the closeness of our two main characters. In fact, I tend to view that relationship as a platonic romance above anything else, and I wish more traditional anime romances had the same level of mutual respect and communication going on. What’s also great about Amanchu! is that it’s an extremely innocent series; more mature than you’d perhaps think at first sight, given Hikari’s wonderful derp face, but also pure and charming enough that even an entire scene about a potential ‘nip slip’ comes across as genuinely cute and funny rather than gratuitous or sleazy. Amachu! is basically the perfect weekend relaxer, and I’m more than happy to see its return.

Question of the post: What new season anime have struck your interest this first week, and what titles have let you down?