After my experience with both Kyoto Teramachi Sanjou no Holmes and Phantom in the Twilight, I wasn’t in the most forgiving of moods and didn’t know if Angolmois, Grand Blue, or even Free! would be able to change that. So, how did they fare? 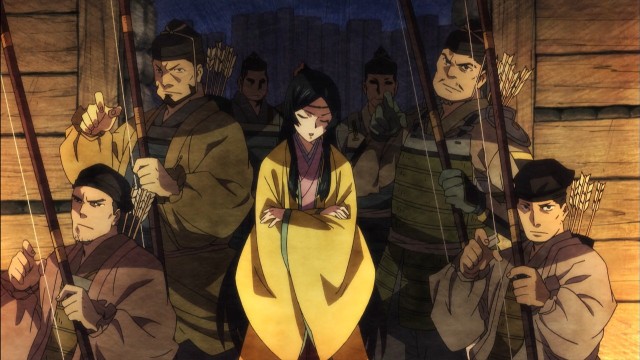 Historical dramas are right up my alley, but even I’m sick to death of anime set during the Sengoku or Edo Period. Thankfully, Angolmois takes place during the late 1200s (for comparison’s sake, a good 200 years prior to the Sengoku Period, and around 400 years before the Edo Period) on Tsushima, an island situated about halfway between Japan and Korea that did indeed face a series of Mongol invasions back in the day. My history surrounding this time period in Japan is patchy at best, and I certainly won’t be counting on Angolmois for historical accuracy (don’t quote me on this but I’m reasonably sure all the characters themselves are completely imaginary); even so, a setting like this a real breath of fresh air, particularly this season.

I’m unsure if Angolmois will be mixing in a bit of the supernatural – it felt like the premiere might have been heading in that direction a couple of times without ever actually delivering on it – but regardless, the heavy doses of action flowed well and had a distinctly retro-ish, shounen battle feel about them. Here’s hoping the series won’t get bogged down in obnoxious clichés or tired fanservice in the episodes to come, as is so often the mainstay of these types of shows. That said, while I’m not usually much of an action fan myself, I can appreciate a good fight scene when it’s executed well, and was actually quite impressed by what Angolmois had to offer in that regard. I don’t care overly much for the character designs, especially the lead, but the overall animation has a cool style to it and more to the point, the action strikes a good balance between gore and taste – definitely not something to be taken for granted when it comes to anime. As a whole, this first episode struck me as being fairly solid and well-paced, so I’ll certainly be sticking around for more.

Free!: Dive to the Future 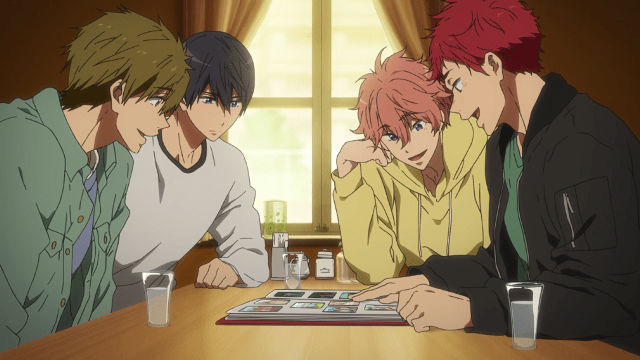 This being the third season of the Free! franchise, viewers should have a good idea by now whether or not this is their kind of show. If not, I don’t know why you’re bothering to read this, but if so – welcome back, fam! Rather than stick primarily with the high school setting this season, the spotlight seems to be on those members that have gradated and are now attending their different universities, while the younger members of Iwatobi swim club have been pushed mainly to the side. A wise decision; not only does university make for a far fresher backdrop (both in terms of Free! and anime settings in general), but with the introduction of several new characters, the cast is now sizeable enough that it’s just not feasible to try and give everyone an equal amount of screentime. With that in mind, the show gets off to a pretty solid start, changing up POVs to keep things interesting but still maintaining a good sense of focus. The visuals are as richly coloured and crisply animated as ever, particular with the close-up and water-centric shots – i.e. the most important stuff – and yes, it’s all still served with a large side of not quite warranted angst and melodrama, complete with ridiculously !EPIC! opening. Bottom line, this is exactly the shit I signed up for, count me in! 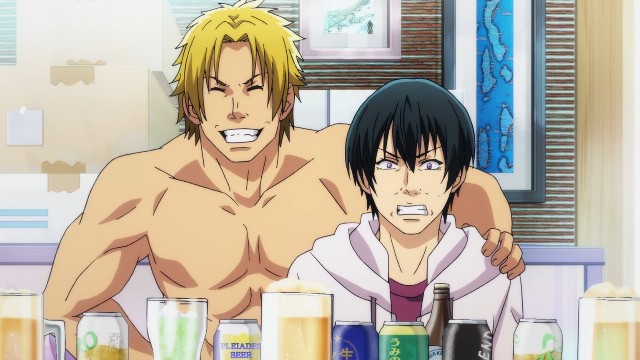 I’m not from America or a guy, and have therefore never been part of a frat. That’s exactly the sort of stereotypical image and feel I get from Grand Blue though – a Japanese version of young, college-age guys getting constantly hammered by the beach and generally behaving the way you’d imagine. I don’t know that I’d call it offensive exactly (while certainly not G-rated, the proceedings are still fairly tame and unimaginative), but it’s nothing but the same one or two jokes over and over as exaggeratedly jacked guys down lots of booze, get naked, and bond over their manly manliness. Meanwhile, the ladies of the show are introduced in one of two ways: from the legs up or the breasts down. They are all pinnacles of beachy, girl-next-door type sexiness (or at least, what the creators think are the pinnacles of beachy, girl-next-door type sexiness), and there’s also scuba diving involved because… it sounds vaguely more interesting that way I guess? In any case, Grand Blue is first and foremost a slightly raunchy comedy, and is also as repetitive and banal as it looks as first glance. I stopped paying attention by the end of the first half of the episode, as it really was just pretty boring all-round.

Question of the post: Did you watch the opening episode for Angolmois, Free! S3, or Grand Blue and if so, what did you think?