We’re now exactly halfway through the season for the majority of new shows airing, while those titles that began airing in the previous season have about 6 episodes to go as well. Let’s check in to see how they’re all faring. (Boogiepop wa Warawanai, Meiji Tokyo Renka, Revisions, and Grimms Notes were all dropped after the first episode.)

My weird relationship with the Sword Art Online franchise continues. Admittedly, I started off (as in, back in the first half of the first anime series) genuinely enjoying it, and I will still defend at least some aspects of the original show against those who seek to use SAO as their anime whipping boy. Nowadays I guess you could say I’m watching it in more ironic fashion, because I find myself laughing in places where I’m pretty sure that’s not the intent, rolling my eyes frequently, and occasionally still getting offended even though I should definitely know better by this point. Basically, words like ‘subtlety’, ‘logic’ and ‘restraint’ aren’t in SAO’s lexicon, and pity the person who’s still expecting any of those things in even the smallest dose. Storytelling-wise, it’s also a total mess. Non-expository plot, what’s that? Consistent pacing? Never heard of it. Characters that aren’t based on pandering otaku stereotypes? Pfft. On the other hand, I have to hand it to the show, it clearly has a winning formula, and I admire its tenacity and yes, even its idiocy at times. It takes a very special kind of something to combine mostly crappy storytelling with enough addictiveness to make me keep watching despite myself. Basically, I’m forced to label SAO a success regardless of – or perhaps even because of – its numerous failings. Go figure. 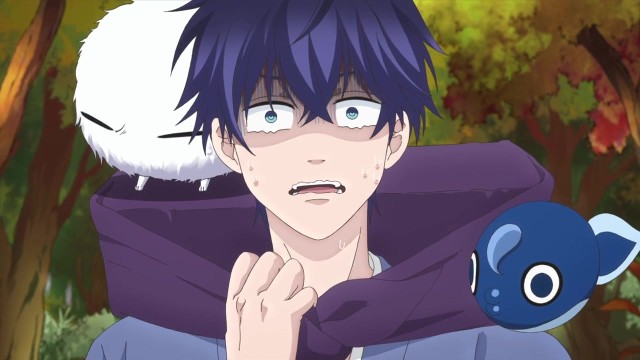 I didn’t actually write about this one when the second season started airing, mostly just because everything I noted about the first season back when that aired in 2016 (holy crap, has it really been that long?) still completely holds up for me, and I didn’t want to be repetitive. But hey, Mononokean is still on my weekly watch list, so while the show doesn’t quite excite me per se, I thought I’d take the opportunity to at least give it a mention. Basically, I think it’s a cute series, entirely inoffensive and for the most part nicely easygoing. Whenever things take a sinister turn, they don’t remain that way for very long – mostly because Ashiya is too darn chipper for his own good. On the other hand, the show is just kind of ‘there’ for me; it doesn’t strike me as saying a whole lot or being especially profound in any way. Not that this is a necessity for any given title to be enjoyable – not every youkai-centric show need be on the same emotional gut punch level as Natsume Yuujinchou, after all – but it does make it feel as though this particular show lacks a bit of gravitas.

I suspect my patience would be stretched a bit thin if these were full-length episodes, but at less than 5 minutes each, I think Ekoda-chan delivers a near-perfect episode length for what it is. More impressively, it maintains a certain sense of consistency in overall feel that’s completely at odds with its framework – anyone would expect a series with a different director, art style, and voice actor every episode to be at least somewhat erratic in quality and tone at best. To be clear, I definitely like some episodes of Ekoda-chan more than others, but on the whole, the show is surprisingly cohesive, likely as a result of its very narrow and entirely character-driven focus. I can totally understand why it wouldn’t be everyone’s cup of tea – it’s too abstract, whimsical and seemingly haphazard to be considered mainstream – but that makes for an interesting watch most of the time, and I wasn’t really looking for anything more from it.

I honestly thought I’d be enjoying this one a bit more than I really am – which isn’t to say that I dislike Doukyoin, but simply that it’s no masterpiece of storytelling in any particular way. The writing is fine, the direction is fine, the artwork is fine, it’s all just… fine. Truth be told, I’d probably be more enthusiastic about the series if some of the key scenes had a little more subtlety to them. As it is, I find much of the internal drama a bit too on-the-nose at times; it tends to lean too far in when I feel like it should be revealing less, since personally, I find it more difficult to get emotionally invested when absolutely all ambiguity is lost or the execution becomes overly obvious. Arguably that’s one of the hallmarks of drama itself, but I just prefer the attempts at heartstring tugging to be somewhat less transparent. That said, as plenty of viewers have pointed out, this is a story revolving around a reclusive novelist and his accidentally-adopted cat, and is set in a world where animals have near-human thought processes and communication skills – in terms of story, it’s basically tailor-made for people like me.

This anime is still the very self-aware and highly entertaining trash it no doubt intended to be from the very start – no more and no less. Viewers either get and dig that or very rightly stay the hell away, and in either case, I feel like everyone should definitely have a good idea of what they’re getting into with this by now. Also, while I didn’t really have a favourite character up until this point, Runa has now taken that spot for me. 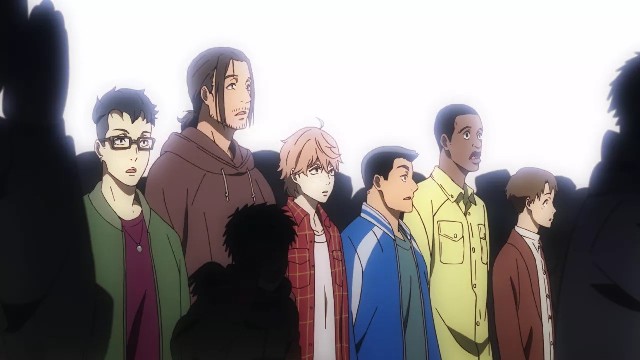 While I’d hesitate to say this is one of the best shows currently airing, what with the likes of Dororo and Neverland to compete with, I do think Run with the Wind is probably one of the most underwatched shows of this (and the previous) season. As far as sports titles go, it lacks the constant tension and screaming excitement that most shows of its ilk have in spades, but that’s exactly what drew me to it in the first place. While that means Kaze ga Tsuyoku Fuiteiru doesn’t attract the same level of viewership as those other shows, I genuinely prefer the more understated, down-to-earth atmosphere it isn’t afraid to provide. It’s also been extraordinarily consistent in terms of general quality, from the writing and direction to the artwork and animation, and that’s no small thing when dealing with any series slated for more than one cour. Moreover, my initial worries about the character development being less than solid due to the size of the cast turned out to be unfounded. If you aren’t watching Kaze ga Tsuyoku Fuiteiru already, I highly recommend you give it a shot, as it’s very much deserving of one. 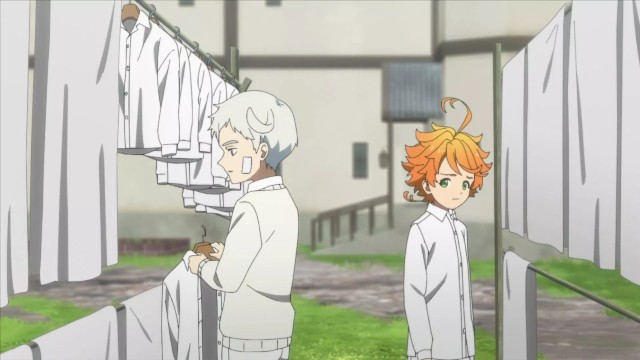 Other than being worried about how things can possibly be wrapped up in a satisfactory manner within 6 more episodes (though I can only assume we’ll be getting a second season at some point), I’m enjoying the hell out of Yakusoku no Neverland. It’s sure not a comforting watch, but it’s a seriously compelling one, and my only minor-ish complaint at this point is that it’s a bit too slow in terms of story. Don’t get me wrong, good horror/thriller titles absolutely should take their time and ramp up the tension bit by bit, keeping the atmosphere tightly controlled by also controlling when and how certain information is revealed and action taken. That said, we’re now halfway through the season and in purely practical terms, very little has changed since the end of episode 1. At some point, there will need to be solid payoff, as well as some kind of conclusion that nonetheless won’t be easily forgotten between I guess the end of March and whenever Yakusoku no Neverland returns afterwards.

Dororo has remained a very solid, not to mention still surprisingly bloody series. This is certainly Tezuka at his darkest, and while a bit of blood is to be expected in samurai-centric period stories, I guess I still hadn’t quite shaken my inherent assumption that since Tezuka tended to pen primarily family-friendly fare, the content of even something like Dororo would be relatively clean and wholesome. If viewers were in any doubt about this whatsoever, the previous two episodes (5 and 6) should irreversibly prove otherwise. That’s not a complaint of course, just an observation. If I did have any complaints about the show, they’d probably be based mostly on its technical aspects, which at times just don’t quite match up to the quality of the OP or premiere episode, although much of the artwork is still undeniably stylish. Given that this is set to be 24 episodes in length though, it’s no shock that the background artwork especially suffers a bit from time to time due to simple budget constraints. This doesn’t do much to hinder my enjoyment of the series, as overall, Dororo continues to be very well-written and sharply directed.

Question of the post: What’s your favourite show of the season right now, and has that changed since things first started to air? Are there any new shows you’re still wavering on?