I’m eventually going to find a new show I actually like enough to stick with this season. Probably. 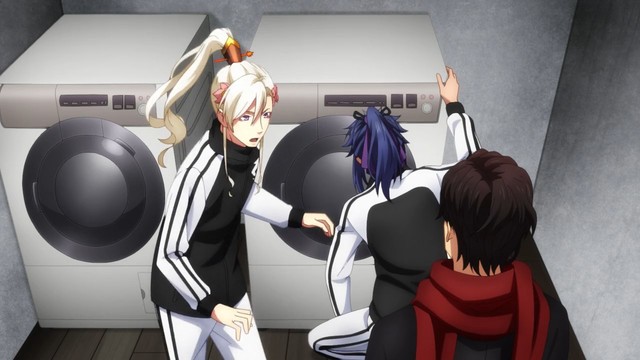 For one of those bishounen-centric game-based titles, Rendai Utena is surprisingly decent, albeit not quite in my wheelhouse, and I have a number of genuinely positive things to say about it. First off, there are some decent comedy ideas here in general; the whole fish/deity out of water scenario may not be particularly original, and I’ll grant you the likes of Hataraku Maou-sama and Saint Oniisan carry this off much more effectively, but the fact remains I like where a lot of the humour is based. The timing may be off on the jokes, but contrary to my expectations, the jokes in and of themselves were enough that I didn’t find the episode overly tedious to get through. The series also clearly has some sincerely nice, if not exactly groundbreaking or subtle messages, and I imagine they’ll go down pretty well with a viewership somewhat younger (and/or less cynical) than I.

Perhaps more importantly to its target audience, Rendai Utena is undeniably easy on the eyes, with smoothly-rendered and detailed character designs, a rich colour palette, and animation that easily surpasses plenty of other currently airing shows. Honestly, there would probably have been a time where I would have eagerly watched this, even if it’s not really my cup of tea these days. Go ahead and give it a try if you’re looking for something on the more relaxed or lighthearted end of the spectrum – you could certainly do far worse this season.

I’m a little unsure what to think about RobiHachi. On the one hand, it’s clearly going for a comedic angle, and as such doesn’t feel like it’s trying very hard – or even trying at all – to be taken in the least bit seriously. On the other hand, even the most raucous of comedies need some kind of internal logic or consistency to be actually funny, and there’s nothing about RobiHachi that makes one lick of sense. A couple of okay one-liners aside, it seems to be relying on its largely slapstick humour energy to draw viewers in, and while I can appreciate its energy, there’s only so long I can put up with anything quite this inane. It’s like Space Dandy and Double Decker! had a baby, but didn’t bother to teach it a thing in the way of worldbuilding or proper satire. It’s certainly colourful, but that’s about all I can say in RobiHachi’s defense; if the show is aspiring to achieve anything more than this, I completely failed to spot it.

Question of the post: What did you think of Rendai Utena and/or RobiHachi? Are either of these comedies your thing, or is there a better comedy airing this season?