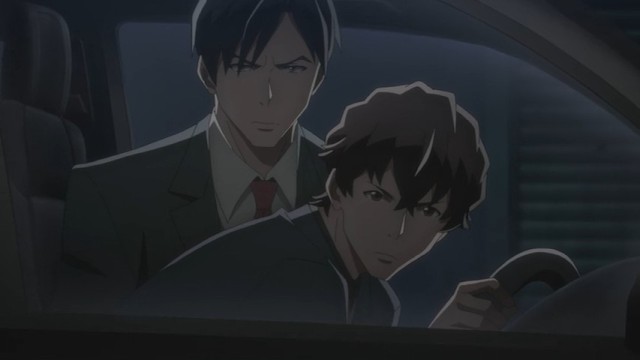 Babylon is a bit of an odd duck. On the surface, it’s a relatively by-the-book crime drama that’s refreshingly free of gimmicks, to the point of actually coming across in many ways as extremely sparse. The almost complete absence of anything so much as a raised voice, combined with the subdued art style and lack of background music, makes the premiere episode feel very stripped down – not devoid of personality necessarily, but strangely devoid of energy, despite initially presenting itself as your fairly typical buddy cop series. No spoilers though, but things take a very sharp turn nearer the end of the episode, and all that empty space suddenly becomes a lot more eerie and menacing in tone, especially in those final few moments.

Thing is, I have no idea if this is a one-off instance (and brilliant case of unintentional misdirection) or if the show is actually going to run with this concept for the whole series. It’s the kind of thing I imagine an anime could just bumble its way into, accidentally appearing way more intelligent than it actually is. If, on the other hand, this was all meticulously planned out from the start and the series has plenty more in this vein up its sleeve, I imagine this will be a very interesting title, to say nothing of being way darker than you’d expect going in. In fact, it might be a bit too dark for my tastes this particular season, but anime fans with a penchant for thriller mystery shows should definitely keep an eye on this one.

Stand My Heroes: Piece of Truth

There’s certainly nothing groundbreaking or even especially compelling about Stand My Heroes. If you didn’t already know this was based on an otome smartphone game, the horde of impeccably-groomed young men in their oh-so-tailored suits and waistcoats make it pretty clear from the get-go what’s driving the show – and it’s sure not the storyline. Mind you, that’s not to say there’s anything about this series that’s inherently bad. Yes, the main protagonist is a pretty young lady who’s probably going to be saved in the nick of time every other episode or so by any one of the dozen dashing saviors available, but given that she’s also no purely decorative wallflower and even has something resembling a personality, things could be much worse. Besides, I’ll admit it’s quite nice to see a bunch of ostensibly hot working professionals rather than a bunch of ostensibly hot high schoolers for a change, even if the budget for the show doesn’t exactly scream high-end. I honestly don’t have much more to say about it than that, and I doubt anyone else will either, but if you’re looking for just any show this season featuring a handful or so of bishounen to relax to, trust me – between this and Actors: Songs Connection, Stand My Heroes is by far the better option.

Question of the post: Did either of these shows strike your fancy, and since they’re vaguely comparable, how do you think they faired against Tokunana and Actors?