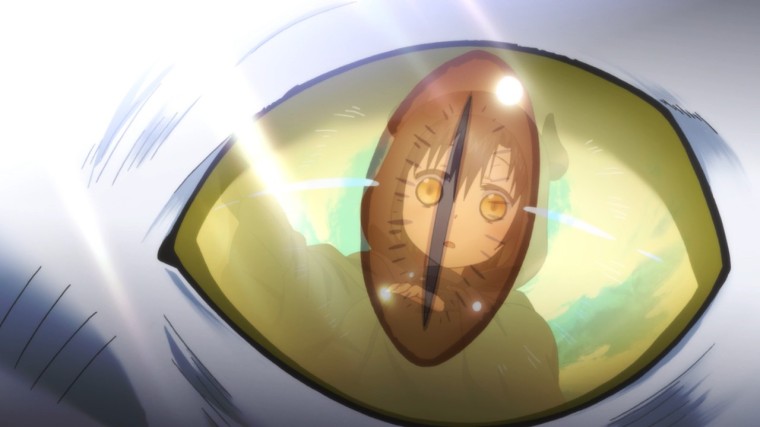 If I can’t have more Natsume Yuujinchou, I can at least enjoy its more innocent, less melancholy cousin.

Either far in the past or perhaps even in a far-distant future, or in some alternative universe altogether, humans have been hunted to the brink of seemingly to the brink of extinction. Now, all manner of spirits, hybrid animals and other beings rule the domain, forming harmonious civilizations and leaving the land outside of cities to itself. If they find out that Somali, a young child discovered and now being raised by a forest golem, is indeed a human, they will most likely eat her. After all, the once-violent and unfathomable human creatures are now considered a rare delicacy…

If that sounds too dark for you, worry not – Somali to Mori no Kamisama, or Somali and the Forest Spirit, doesn’t get overly bogged down in the backstory. Somali herself, a curious and playful child currently disguised as a rather adorable minotaur, comes across as fairly happy-go-lucky and not particularly concerned about the danger that could potentially be lurking around every corner. Her protector, who she refers to completely innocently as her father, clearly has a heart of gold despite being incapable of either understanding or experiencing (at least in theory) any human emotion. Incidentally, the golem’s deadpan delivery of every line is somehow the most adorable part of the entire thing, and played to perfection by fan-favourite Ono Daisuke.

Make no mistake, Somali doesn’t present any new themes or ideas, and some of its storytelling decisions (terrible exposition ahoy!) are pretty questionable. However, what it lacks in complexity or subtlety, it at least partially makes up for in sheer charm. As I mentioned, it doesn’t focus on the darker aspects of the story; while the audience can certainly feel some tension in the fact that the titular character is more or less in constant danger (in large part thanks to her own insatiable and entirely childlike curiosity, even if she remains blissfully unaware of it), I get the feeling that the series is too family-friendly in nature to escalate into any real violence. This makes it relatively light-hearted, easy to digest, and undeniably sweet, like a supernatural Usagi Drop or, as I first envisioned, a more kid-friendly Natsume Yuujinchou. In other words, definitely something my cold heart can stand to watch this winter season.

10 thoughts on “Anime Taste Testing: Somali to Mori no Kamisama”