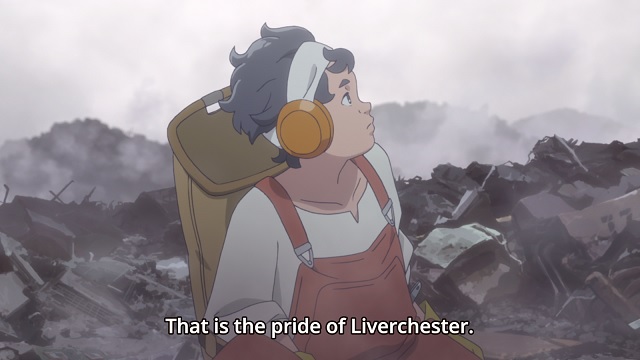 So Liverpool and Manchester finally united, and then the apocalypse happened. Sounds about right.

I’ll get this out of the way right off the bat: I’m an unapologetic Sato Dai fan. Even if I wasn’t though, and I’d just happened to watch Eureka Seven in passing, it’s abundantly clear from minute one that his touch is aalll over this, from the scripting down to the character designs. Hell, there’s even a scene near the end of this premiere that could be compared to a scene from the ending of the first episode of Eureka Seven, literally shot by shot, dialogue included.

This isn’t to say Eureka Seven and Listeners are the same thing. The two main characters, although seemingly very comparable at first glance, actually aren’t at all the equivalent on closer inspection, and the story of course, while hinting at some of the same themes, looks to be very much its own beast. Even so, Listeners is going to have to work very hard to distinguish itself, because the storytelling beats and stylistic similarities are just too blatant to ignore, even if you tried to go out of your way to do just that.

Of course, what’s always been the most important two aspects to me of any Sato-composed work – its biggest and most distinctive strengths – are without fail the worldbuilding and the music. The former definitely has plenty of potential here, and as far as first impressions go, I don’t feel especially concerned that it will live up to that. The setting is large in scope, promises to be unique, and is detailed enough that it feels believable almost regardless of the events that led to such an outcome. The music, on the other hand, is a bit more up in the air for me. Is it different from the usual anime fare? Absolutely. But does it have that undeniable flair, that truly unforgettable ‘oomph’ that all but screams for viewers to sit up and pay attention? I’m not as sure about that. It’s a bit like the Watanabe Shinichirou effect – knowing what Sato’s capable of, I’m not looking for just good or interesting – I’m looking for fucking fantastic.

Based on what I’ve seen so far, I’m certainly willing to see what Listeners is really made of, but coasting by on its Eureka Seven genetics isn’t going to be enough – I’m ready to see something genuinely original, both in terms of atmosphere and storytelling.

Side-note: Needless to say, when referring to Eureka Seven, I’m talking only of the original 2005-06 series, not the sequel series, and certainly not the films.