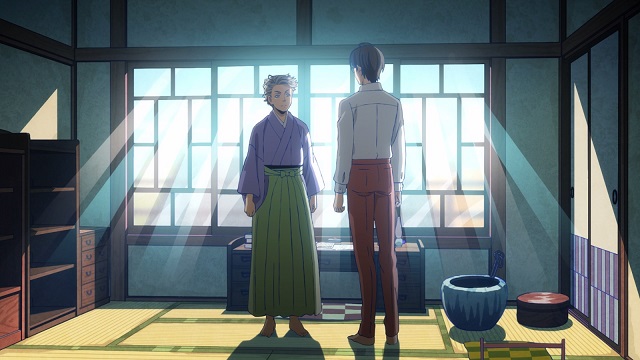 The lesser of the two mystery shows airing the season, but probably still the best period piece.

I imagine the setting is what will first strike viewers about this show. While primarily a mystery series, Kitsutsuki Tanteidokoro/Woodpecker Detective’s Office is set in Meiji-era Japan (from context clues, I’d guess somewhere in the late 1890s/early 1900s), which is a fairly unique time period as far as anime is concerned. And to their credit, the creators have done a pretty decent job of evoking that distinct, seemingly incongruent atmosphere of old-school Japan meets rapid Westernization, most notably through the buildings and costuming. It’s also notable in the OP music – a fun jazz number that immediately had me sitting up and paying attention to what I assumed from the trailer would be a rather sleepy kind of show.

The other aspect of Kitsutsuki Tanteidokoro that had me interested was the art style. This will depend a lot on personal taste, but you can’t deny that the almost water-colour-like aesthetic helps to distinguish the series from anything else airing this season. While not terribly expensive-looking – the lack of general movement in terms of animation as well as the lack of background detail makes the production values seem a bit on the low side at times – it’s quite attention-grabbing (and honestly very pretty) nonetheless.

Unfortunately, as a mystery show, I didn’t much care about what was going on, and found my attention start to wander from around the halfway point. There just didn’t seem any good reason to invest in what was happening plot-wise, so whether the mystery was solved or not and more importantly, how it was solved, didn’t feel especially important to me by the end of the episode. The characters were all likeable enough, just not especially compelling – and since the viewer knew neither the victim nor the perpetrator, that didn’t really help to make the mystery part any more captivating.

I’m planning to watch at least one more episode of this, because as a whole it seems like a perfectly fine show, but because this is such a relatively quantity-thick season, I don’t know how long I’ll be keeping it on the weekly watch-list.