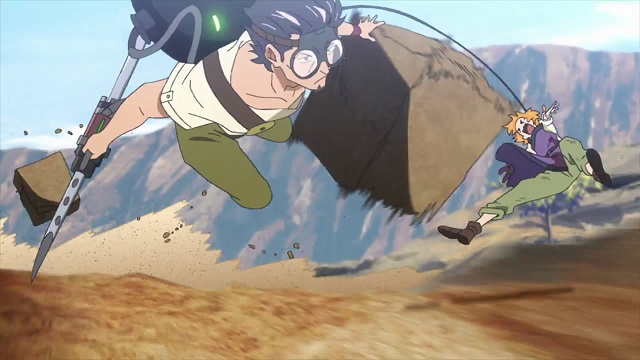 The show Shingeki no Kyojin might have been if the titans were mostly giant bug-dinosaur-like creatures, if the tone was happily far less self-serious, and if the characters didn’t yell approximately 80% of their lines.

As the new series I was probably most looking forward to watching this season (other than, technically, Great Pretender), I’m happy to report that at the very least, Deca-Dence isn’t terrible. In fact, I’d say it made a relatively good standing for itself based on the premiere. The first five minutes or so had me worried, mostly because right after a perfectly decent opening scene, we head straight into exposition land by way of a distressingly typical school sequence, complete with all the Japanese mannerisms you’d expect and a couple of bitchy head-of-the-class type characters who are immediately pitted against our spunky and “earnest” heroine (thanks for spelling that out for us, supportive-friend-character). With such a potentially interesting setting, had the series gone and made the show into some kind of school-specific story, I would have likely declared the show a total waste of good material and given up there and then.

Luckily, despite its otherwise awkward transition into what I assume is the main story, Deca-Dence makes smarter decisions than that, and the rest of the episode passed in seemingly the blink of an eye, bogged down only here and there by dialogue that’s occasionally just a bit too on the nose. Moreover, our main character, while not especially unique in terms of Main Girl anime personality traits, isn’t anywhere as annoying as she could have been, so it’s actually pretty easy to root for her while still keeping an eye out for other more possibly complex characters hanging out on the side-lines. Again though, the setting here is really what interests me the most, so how our characters interact with it is what’s going to make or break the show for me. 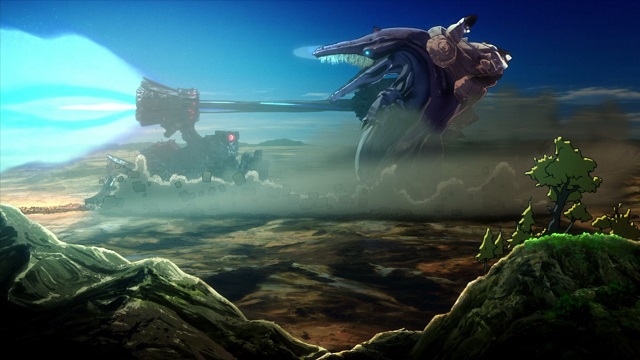 I honestly don’t have much to say either way about Deca-Dence in terms of its visual presentation. It doesn’t look low-budget by any means, but there also wasn’t anything that particularly stood out to me, either with the character designs or any of the background art or movement. As for the music, I think it’s safe to say that we have a fairly standard anisong-type production here – I actually thought the OP theme (in this episode played out over the wrap-up of the final scene) was performed by LiSA until I saw a different J-pop singer referenced in the credits.

In short, I’m happy enough with what I’ve seen so far and will be sticking with Deca-Dence to see where it goes. As long as it maintains its current balance between everyday humour and the seriousness of the outside world it portrays, I shouldn’t have too many complaints.