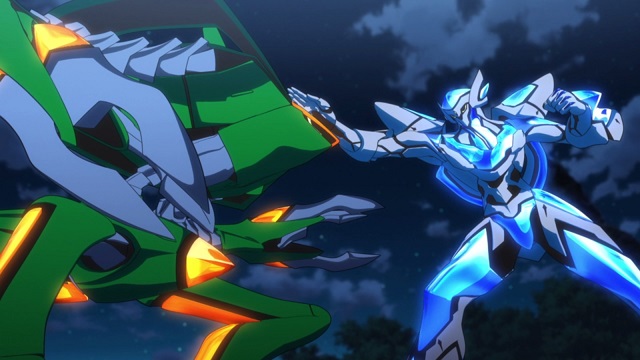 So it’s mecha but with backwater villagers dressed as old-west cowboys and the more tech-advanced folk looking like something out of a Chinese-inspired historical-fantasy. Cool cool.

Well this sure is… something. Alternative universe (I think?) fantasy is crossed with mecha is crossed with action/adventure and some bawdy comedy to create this undeniably unique piece of work – an anime-original directed by the guy behind Code Geass, Mugen no Ryvius, and Planetes, but written by the guy behind Gurren Lagann and Kill la Kill. Whatever the series does from here on out, it’s certainly already made a splash, and I suspect a lot of people will be sticking around on those grounds alone.

As for me, everyone knows I’m the boring conventional one. I have no problem raining on the fun parade by admitting right off the bat that this just isn’t my cup of tea. I’m not saying the series is bad, mind you. A zany mishmash of ideas with an equally odd overarching tone, to be sure, but nothing that could be accused of banality or even poor execution. In fact, I’d go so far as to say that the scripting reflects a lot of self-awareness – Back Arrow knows it’s a total weirdo and is likely going to embrace plenty of old-school anime tropes, while simultaneously having a ton of fun playing around with them just because it can. In that regard, there’s a sense of joyful, but not mindless entertainment about the show, and whether or not you get fully behind this will probably depend on your mileage concerning teenage boy locker-room material. The premiere does, after all, spend what feels like half its run-time on dumb but inoffensive gags about its so-far nude protagonist.

If that doesn’t sound like quite enough for you, combine all this with what seems to me a late 90s-influenced art style, especially in terms of the character designs for the supporting cast introduced within the initial scenes. The hair alone speaks volumes, if you know what I mean. There’s also a bit of fanservice sprinkled in here and there that puts me in mind vaguely of the same, although it’s nothing too out-there. On the whole, Back Arrow has a somewhat more family-friendly vibe than the likes of Kill la Kill, so I wouldn’t expect anything insanely raunchy (especially since it’s not actually a Trigger title).

As I said, this isn’t something I’m too interested in purely from a personal point of view – it’s definitely something you’re either in the mood for or you’re not. However, I’d say it’s worth checking out if any of what you’ve just read intrigues you in the slightest, because I doubt anything else this season will be able to top Back Arrow’s sheer eccentricity.