Aside from the creepy teacher, this series is actually pretty okay.

I’ll go ahead and say right off the bat that you should probably just completely ignore the first one minute or so of this show. It sets completely the wrong tone, implies a very different kind of story that (fortunately) doesn’t seem to be there, and has nothing at all to do with what comes afterward. I have no idea why the anime decided to include this, which I can only assume was part of the original manga – it’s neither funny nor necessary to the plot in any way – but I’m prepared (I think?) to look past it, assuming the teacher and his creepy boob comments aren’t going to become a recurring ‘gag’. Ugh. Why.

Anyway, as you can probably guess, I went into this with a not-so-favorable impression after that weird introduction, fully prepared to drop the series immediately following its premiere, and quite possibly much sooner. Even if it wasn’t going to be needlessly creepy, I assumed it was at least going to be eye-rollingly drama-laden – my primary fear being that it was going to turn into one of those “aha, now that I’ve discovered your ‘true identity’, I’m going to blackmail you into dating me and eventually we’ll actually fall in love, isn’t this both romantic and hilarious” kind of shows. Complete, of course, with a terrible excuse for a human being as the male lead and bitchy side-characters ready to spread life-destroying gossip at a moment’s notice, all of it being passed off as comedy fodder. 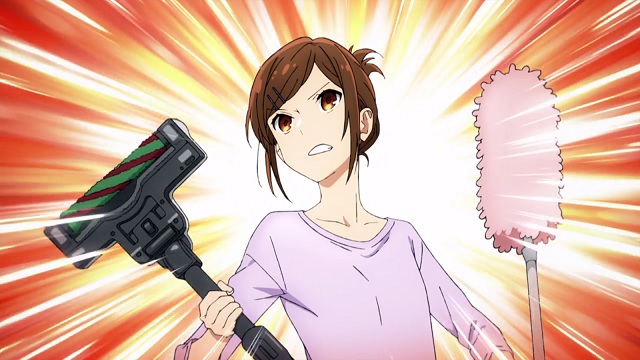 Rest assured, this is absolutely not the case. Everyone seems nice – as in genuinely, oddly nice. No main or even supporting character seems out to be malicious, purposefully or otherwise. Nobody appears interested in spreading gossip, or even really listening to it. I won’t say Horimiya is quite as beautifully wholesome as the cast of, say, Tanaka-kun wa Itsumo Kedaruge, but it does feel a bit like that kind of show, wherein everyone behaves like a decent human being and the focus is more on the gentle slice-of-life aspect than any kind of outrageous comedy.

Granted, the setup here isn’t particularly unique, and I think I would’ve appreciated it far more if Horimiya had gone with the girl being the one to hide her rough physical exterior under long bangs and glasses rather than her eventual love interest. It’s not as though there’s anything shameful, embarrassing, or even especially unconventional about dressing plainly at home while going about daily domestic chores because your parent is away at work a lot (if anything, traditional Japanese society would likely laud such behavior). By comparison, having a bunch of piercings and tattoos is considered fringe in Japan, especially for a high school student (i.e. you’d likely be expelled), so wouldn’t it be way more interesting to reverse these roles in terms of the main characters and their gender? 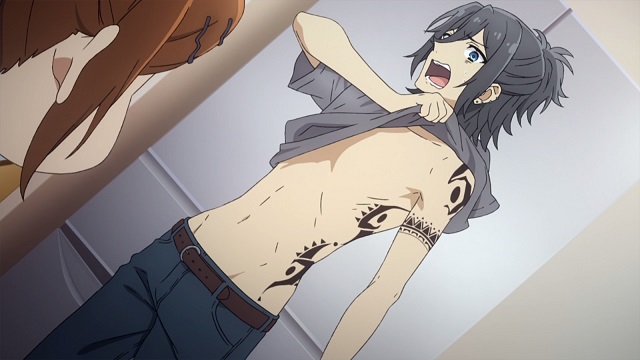 Aside from this huge missed opportunity though, I ended up enjoying this a lot more than I expected. Again, the plot is far from innovative, and I think the title works better and more naturally as a slow, easygoing slice-of-life piece than a comedy per se. On the other hand, it’s cute enough and relaxed enough that I’m happy to stick with it for the time being, since as it happens, life is sucky in a lot of ways right now and yes, it is okay to want to watch something that’s just unambitiously sweet.

To anyone who feels similarly, I say sit back and enjoy.