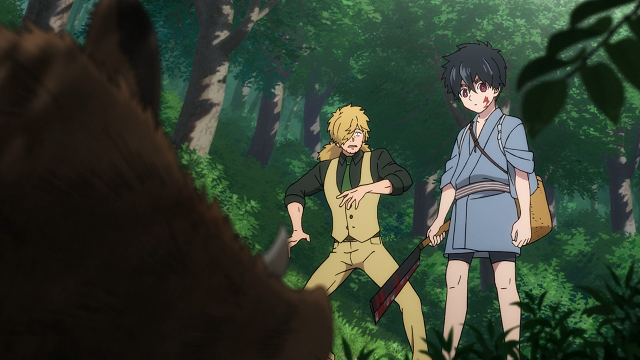 While quite possibly the series I was least looking forward to giving a watch, this ended up being surprisingly alright.

That opening probably makes it sound as though the show raised a bunch of red flags for me in terms of content or delivery before I could even start, but this isn’t actually the case – at least, not in the way it maybe comes across. Rather, despite my moderately high tolerance for general blood and gore, I wouldn’t call myself a horror aficionado, and more to the point, that’s just not what I’m in the mood for this season. It may sound silly or overdramatic, but with the current state of the world, I’d much rather stick to sweet and/or silly for the time being rather than wade through muck – even if it happened to be very high-quality muck.

However, although horror was the vibe I got from the first couple of minutes of Kemono Jihen (albeit purely from the feel rather than any particular on-screen occurrences), by the end of the episode, it became clear that this is more a supernatural mystery and action/adventure piece. It has the occasional trappings of horror, but the manga on which it’s based is firmly shounen, so this title isn’t out to appeal to older viewers by way of gratuitous violence or splatter. I wouldn’t necessarily call the anime family-friendly, mind you, but it does stop short of actual horror, and given that its cast looks like it’ll be primarily made up of tween protagonists, I’m not expecting any sudden veer toward the extremely dark or arcane.

This of course also means that if you’re on the lookout for something unconventional or ground-breaking, you likely won’t find it here. If I had to guess, I’d say Kemono Jihen will play things mostly by the book, presenting enjoyable but relatively predictable monster-of-the-week-style episodes similar to its premiere – perhaps with an overarching plot kicking in somewhere around the halfway mark that nonetheless won’t ultimately lead to any genuinely shocking revelations. Personally, I’m totally okay with that given the place I’m in right now, but your mileage may well vary depending on your own mood and preferences.

Other than that, I don’t have a whole lot to say about Kemono Jihen. Although it falls slightly lower on the totem pole in relation to my other current weekly watches, it also made a decent first impression, so I’ll be sticking with it at least for the time being.