Welcome to the eighth consecutive year of the AAA – the one-woman award ceremony where the tickets are on the house, the drinking policy is BYO, and the results are guaranteed to be 100% subjective.

For those who may not be familiar with my annual series, contrary to the article title, these awards are not for anime released solely in 2020, but rather for shows released any time from the start of the spring 2020 season until the end of the winter 2021 season. (This mostly because I get tired of scrolling through all the usual best-of lists in late December/early January, but also because there tend to be fewer ongoing anime titles between the winter and spring seasons.) Only officially televised anime that I watched right through to the end are eligible for these awards – that means films, specials, OVAs, and any shows I dropped part-way through (or are still ongoing) are automatically out of the running.

With those mandatory pleasantries out of the way, feel free to kick back with your preferred snackage/beverage, and let’s get on with the show!

Given the synopsis of Kakushigoto, and with zero prior knowledge of the source material, I was fully ready to experience something… well, incredibly cynical and/or pervy, frankly. Imagine my joy when I instead discovered a sincerely adorable and heartwarming dad-anime type show that, as a comedy, is also genuinely funny. And unironically funny at that – not ‘edgy’ or overly dark, not even necessarily slapstick, but honest-to-god, sweetly funny. For the most part, Kakushigoto’s focus remains on the main character’s job in terms of how this affects his relationship with his young daughter and how she views him/the world around her. Needless to say, hilarity ensues as Goto tries desperately to shelter Hime from the reality of his career, at which he typically succeeds out of pure dumb luck. There’s a great cast of side-characters too though, and at the end of the day, I just wasn’t expecting anything so pleasant, let alone so emotionally touching.

“I don’t know what I just watched, but I know I want more of it.” That was my immediate gut reaction to the first episode of this show, and I stand by that nearly half a year on. Akudama Drive wasn’t so much a much-needed breath of fresh air as it was a wrecking ball-like blow to the senses – so visually dynamic and so tightly-paced that it was difficult to take everything in at a glance, yet I was loathe to ever pause the premiere and interrupt the flow it had going on. Vibrant, vivacious, flamboyant – use whatever descriptors you like, but there’s no getting around the fact that Akudama Drive made me sit up and pay attention, right from the establishing shots all the way through to the ending credits. Subtle? Hell no. As much fun as I’ve had with any anime premiere probably in several years? Absolutely. 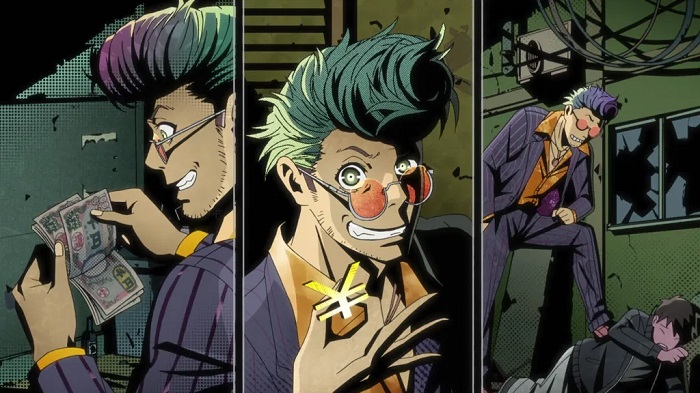 There’s just something special about the one guy in the cast who’s a total wannabe. But fake it ‘til you make it seems to be Hoodlum’s motto, and fake it he sure does – how else can you possibly stand your ground among a group made up of the likes of a murdering psychopath, an elite hacker, a freakily bloodthirsty doctor, and an action-seeking street fighter who’s strong and resilient enough to put even the hardest pro-wrestler to shame? Mind you, only said Brawler is actually dumb enough to believe any of Hoodlum’s progressively more outrageous lies – and indeed, in the end, it wasn’t just Hoodlum’s terrible acting skills that won me over, but his oddly charming bromance with Brawler and the way in which, ultimately, he ended his role in the story as a kind of redeemed hero. Also, I mean, just look at that pompadour. Come on now, how can you resist that masterpiece of hairstyling?

Tempted as I was to give this award to the also visually excellent Wonder Egg Priority, Akudama Drive managed to beat even that show out with its sheer energy and vigor. While I always appreciate decent visuals, they’re normally not the most important part of an anime for me, whereas in Akudama Drive’s case, presentation is everything. You might assume this would result in an otherwise unengaging show that lacks any kind of depth – and to be fair, I’m not about to go on record saying that this title is particularly complex or sophisticated. It is, however, an absolute spectacle to behold and a true joy to experience, and the quality of its production remains consistent all the way throughout. From action scenes to background art detail, Akudama Drive nails it all.

This category always faces some stiff competition, and 2020/21 was no exception – not only the likes of Akudama Drive but also shows like SK8, Balance:Unlimited, and Listeners all had banging OPs in one way or another. And while I dearly wish this particular OP had been a reflection of the show’s actual content (or at least of its energy), Taisou Zamurai’s opening credit sequence is undoubtedly fun, revels in its oddball-ness, and gives plenty of attitude, which is exactly what makes it so fresh. The jumpsuits (then the leotards), the sunglasses, the synchronized poses under flashing stage lights as though the cast is about to throw down while simultaneously presenting the most gymnastics-inspired hip-hop performance of all time… what’s not to love?

You guys, I got nothin’. Sure, there were a bunch of EDs that were kinda okay, but I found even these to be middling enough that I couldn’t quite bring myself to place any of them on here. It’s a shame, because EDs already seem to get little enough attention as it is in comparison to their OP counterparts – and if the producers couldn’t spare enough time or money to deliver good visuals, I at least expected some decent music. Unfortunately though, even after going through my entire list – multiple times – of all the anime I’d completed over the last year, not a single ED track really stood out to me.

It’s hard to pin down the music in Wonder Egg Priority – so much so that I almost overlooked the soundtrack entirely in favor of the show’s numerous other merits. However, despite rarely being loud (and I mean that in terms of both volume and general presentation), Wonder Egg Priority’s soundtrack is very much an integral part of the series, with pieces that at times do a great job at subtly yet effectively complementing key moments, and at other points seemingly running counter to them (though always for good reason). In a way, it’s almost a shame that the music here tends to be so seamlessly integrated, as this makes it more difficult to appreciate as far its role in really standout scenes go. And yet, this is also exactly why the music does such a great job of accompanying the on-screen action – ultimately, it’s that understated presence that contributes to the show’s emotional potency.

The first question that pops into my mind when I think of Listeners isn’t “What?” or even “Why?”, but “How?” How did such a clusterfuck of a show get created in the first place? How did things become such a mess so early on and then just keep rolling with it like nothing was wrong? How do you even go about making such an incohesive production seemingly without batting an eyelid – was it completely deliberate, or did someone slip something into the punch that I can only assume was present in every single writer’s meeting? Truly, Listeners is a baffling series, in just about every way imaginable – a weird, not even especially compelling jumble of ideas that sometimes never goes anywhere at all, sometimes never explains themselves properly, and sometimes never appears to have any point whatsoever other than “It’s just what the creators felt like at the time.” I’d be lying if I said this is the worst show I’ve seen in recent years, but it’s got to be the most bizarrely off ones out there, and I have no idea how that came to be. I suspect that, like Japan Sinks 2020 (and yes, the only reason that particular monstrosity didn’t take this award is because it’s an OVA, not a televised series), this will forever remain a mystery.

You all knew it was coming. Akudama Drive might not have been everyone’s cup of hyper-caffeinated energy drink, but to those committed to watching all the way through, it sure seemed to be a crowd-pleaser, and I can absolutely see why. Setting, background art, character designs, music, action sequences, pacing – this series had pretty much everything in the bag, pretty much 100% of the time. By no means would I call Akudama Drive a perfect show, but it certainly is a glorious one, and based on its manner of presentation, I’d say it knows it. It takes real guts to create such an unrestrained anime-original, but also genuine smarts to stick the landing, and while the series often had me questioning whether it was being incredibly dumb or surprisingly intelligent, I think that in the end, it proved that the two don’t have to be mutually exclusive – and indeed, that when it comes to something like Akudama Drive, they actually shouldn’t be.

And finally, to wrap things up as always, here are those shows that aired over the past anime year that I also completed watching but took home none of the above awards. I enjoyed the majority of them to at least some extent, so with one or two exceptions (*cough* first and last titles *cough*), they should probably be considered more honorable mentions than snubs: Appare-Ranman!, Fruits Basket 2nd Season, Yesterday wo Utatte, Fugou Keiji – Balance:Unlimited, Deca-Dence, Horimiya, Non Non Biyori Nonstop, Osomatsu-san 3rd Season, SK∞, Yakusoku no Neverland 2nd Season.