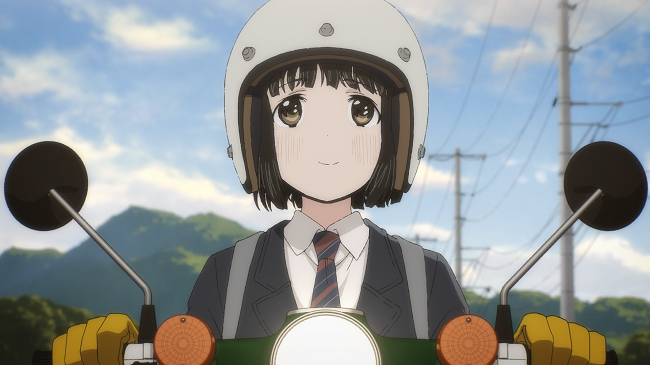 I really seem to have a knack for reviewing two complete opposites in the same post, don’t I? 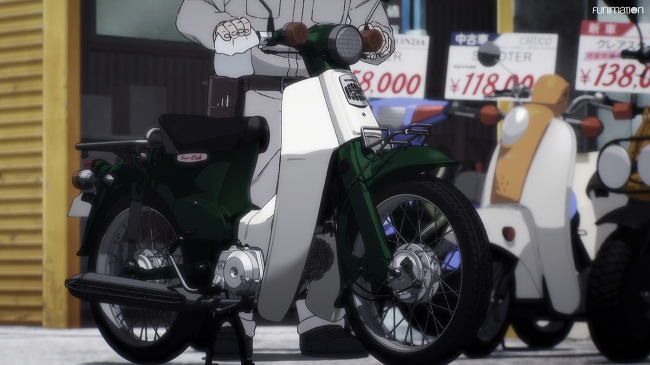 This one is for all you slow-burn slice-of-life aficionados out there – and believe me, it doesn’t get more slow-burn than this (assuming of course the rest of the show stays true to the premiere). Watching Super Cub feels almost like watching a couple of long, uncut movie scenes, interspersed with some gorgeous nature shots and the occasional piece of dialogue. And I do mean occasional, by the way – there had to have been about 5 minutes of talking, tops, throughout the entire episode, and very little in the way of noticeable background music.

That doesn’t mean Super Cub lacks characterization though; through pretty much only her facial expressions, and a bit of monologuing at the start of the episode, we learn quite a bit about Koguma’s thought process, if not her actual backstory just yet. Despite being, by her own admission, a girl with no parents, friends, or hobbies, Koguma is oddly endearing as a character, perhaps because her clearly well-established everyday routine outside of school is immediately relatable (at least to me), and also because it’s obvious that once she has something to aim for, she doesn’t shy away from achieving it, even with nobody around to support her or offer advice.

I’m not too worried about the extremely deliberate pacing of this show, since I’m counting on the rest of the cast, once introduced, to liven things up a bit and keep the atmosphere from growing stale. However, in case it’s not already obvious, this won’t be everyone’s cup of tea – I expect it will just be far too quiet for a lot of anime fans, especially if they go in expecting any type of motorcycle ‘action’, racing or otherwise (or panty shots, which is what I was half-afraid of getting into this one). On the other hand, if you’re after some beautifully-drawn scenery (albeit with some occasionally jarring moments of CG) and a very chill vibe, even if you have zero knowledge of or passion for motorbikes, Super Cub might just be for you.

Well, I can’t in all honesty say this show is good, but it sure is entertaining. I just so happened to be watching this over breakfast and all but snorted milk out of my nose. If Hell Girl and Sailor Moon got together and had a magical-boy baby, this would be it – an extremely fabulous magical-boy baby.

It’s like this: take your standard cast of  (fairy) magical boys, tasked with the sacred duty of “forming attachments” with humans (likely all to be young women) in order to save their hearts (i.e. rescue them from their various life problems). Add an idol-style insert song per episode. Toss in a generous dash of actually pretty dark societal commentary, like online bullying to the point of suicide, with everything presented as unsubtly as humanly possible. Hand all the main cast incredibly cheesy lines, sometimes in English purely for the hell of it, along with hilariously revealing outfits, while also ensuring there’s plenty of skin on display between the action scenes as well. I’m talking just shy of R-rated here – these guys basically look like gay strippers. The result is an unintentional comedy that’s simultaneously not at all my cup of tea, yet far more interesting than I would ever have given the MAL synopsis credit for.

Magical boys not your thing? Me neither, but I’m actually going to suggest people watch the first episode of this, despite having no intention of watching any further myself. Sure, as is to be expected, the music is your crappy generic idol boy band fare, and no, neither the artwork nor the animation speaks of a decent budget. However, there’s a ton here I just wasn’t expecting, and in terms of surprise comedy value, I’d venture to say you’ll get plenty of bang for your buck in 20 minutes, but particularly in the episode’s second half. So thank you, Fairy Ranmaru – may you continue to light the way of human hearts everywhere.