The final two anime on my to-watch list this season, and they’re… well, they’re not great, but at least it’s something. And if that doesn’t sum up the state of the summer 2021 line-up overall, I don’t know what does. 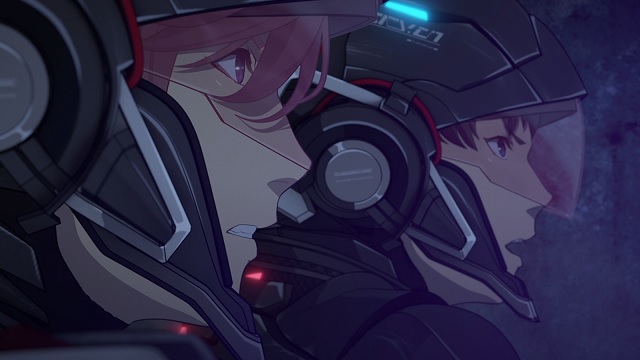 This is an interesting one, and not only because the anime is apparently based not on a manga, game, or light novel, but on a 1992 Japanese TV drama (if you happen to have seen this alleged cult classic, let me know in the comments – I’m intrigued).

Funnily enough, while I only looked up the anime’s origins afterwards, I did catch myself thinking more than once while watching that it would’ve perhaps made a cooler live-action series than an anime. There was just something about it that made me feel the pacing would be better suited to a live-action format – although that might just be because the vaguely dystopian futuristic setting, along with the emphasis on the mystery and sci-fi/supernatural aspects, put me in mind of some of the shows I used to watch on TV myself back in the late 90s and early 2000s like Dark Angel.

I think my biggest concern with Night Head 2041 is that despite having plenty of individual ideas that interest me, when they’re all put together, the premise becomes a bit of a mess. There’s so much going on here in terms of base concept that I finished the episode not knowing where my focus should be, or even whether the episode worked at all with that particular combination of ideas. Had the show picked just one of them and ran with it, at least for the time being, it would likely have resulted in a much stronger start. As it was, I found the story dynamic but cluttered, especially considering the relatively large cast. This also meant there was more or less zero time allotted for character development – the premiere was way too busy setting up the plot to be able to properly introduce its characters – or give me any particular reason to like or root for them.

All that being said, this could well be something to keep an eye on this season, especially if you’re into your slightly grittier dramas or action-orientated sci-fi. In a weaker season, I may have been fairly quick to dismiss Night Head 2041 entirely, especially if I didn’t much feel like watching an all-CG affair. However, given the number of shows I’ve now chosen to keep up with on a weekly basis (making for a grand total of three), this one still stands out as being competent enough to warrant a second look.

As with Night Head 2041, I’m currently in two minds with Sonny Boy. On the one hand, it’s been a pretty long time since I’ve properly watched a survival game-type series, despite there being a surfeit of these in anime over the past few years (all of which I’ve more or less immediately hated – Mayoiga, Ousama Game, Darwin’s Game, Pet, etc. etc.). To be fair, this one might be more Lord of the Flies-inspired than survival game per se, which I’m a bit more into – but again, it’s been a while, maybe even as far back as the likes of Infinite Ryvius and Jyu–Oh–Sei. So yeah, I’d say I’m about due again for something along those lines.

On the other hand, I’m not sure I loved Sonny Boy’s overall presentation of these types of themes. Don’t get me wrong, I’m overjoyed that there’s no overt sexualization (touch wood) of its female characters or specifically predatorial cast members – always nice to see that yes, people can be depicted as assholes without also insinuating that they’re rapists (thank you, anime, for making me get that specific about a plot point). However, I’m not entirely sold on Sonny Boy’s delivery. I get that it’s going for something between Kon Satoshi and Yuasa Masaaki, both in regard to the general art style and the surrealist approach to its subject matter, but that’s kind of the point – when something is actively trying to be artsy instead of just doing it, the seams are bound to show. Add to this that I don’t especially like any of the characters, even the ‘good’ ones, and you can probably see why I have such a lukewarm response to such a potentially compelling title, even in the desert of anime that is summer 2021.

For now, I’ll keep watching, but it remains to be seen for how long.