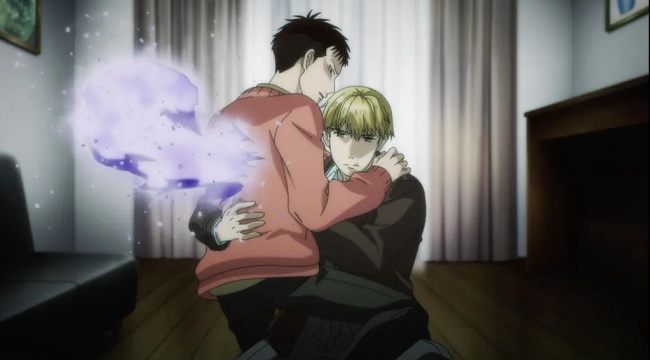 You know what my problem with this first episode was? Basically everything.

Okay, I realize that sounds a little overboard, and maybe I just wasn’t in the right headspace, but you guys, this was pretty bad – and if I, a long-time fan of the boys love genre, is saying that, you can probably be sure something’s gone pretty wrong somewhere along the line.

Alright, let’s get to some specifics of Sankaku Mado no Sotogawa wa Yoru (otherwise known as The Night Beyond the Tricornered Window). My biggest gripe here is that Hiyakawa is, frankly, an enormous creep. I’m sure people will defend this show, or at least his character, by saying that this is done intentionally – after all, that last scene of him appearing to sneakily eat what I think (?) was a body part points to some deviousness. I haven’t read the manga so for all I know, he could turn out to be the primary antagonist of the series.

Even so, this episode was so choc-full of non-consensual touching, hugging, and biting/licking it felt like I was watching a boys love title from the early 2000s. I guess the genre hasn’t progressed as much as I thought/hoped. And look, even if Hiyakawa is supposed to come across as gross and predatory for some kind of villain reveal later on, that doesn’t make the show any more palatable to watch – especially since I get the distinct feeling that the show thinks it’s being terribly clever and/or funny with all the sexual innuendo. We get it, touching the soul of another person is analogous to sex. Believe me, there’s zero subtlety about any of the wordplay.

While nowhere near as important to me, I also want to mention the show in terms of its technical qualities, because unfortunately, I really don’t like it production-wise either. I don’t know how to describe it exactly, but things just somehow seem… off. Again, it’s possible, even probable, that this is a deliberate artistic choice – after all, this is a supernatural mystery/horror piece, and given the gory subject matter, it’d be weird if things looked too nice. Even so, aside from maybe the decent background art detail, very little, if anything, about Sankaku appeals to me. The character designs, even for the non-creep main character, are all vaguely unsettling, the silence between the dialogue or action is off-putting, and even the voice acting does absolutely nothing for me.

Bottom line, I don’t really know what I’m looking for this season, but Sankaku Mado no Sotogawa wa Yoru sure ain’t it.