The verdicts are in, and they all look disappointingly lackluster.

Actually, to be honest, I don’t really care. I’m busy, these weren’t my top picks as far as expectations going in, and I’m sure everyone has better things to watch in general. I’ve got RuPaul to check out, you know? Because I’m super short on time these days, I won’t be writing exhaustively about any of these shows (hey, just be glad I’m giving you more than bullet points), so here are my extremely brief hot takes on what’s aired so far this winter anime season.

Hakozume: Kouban Joshi no Gyakushuu/Police in a Pod 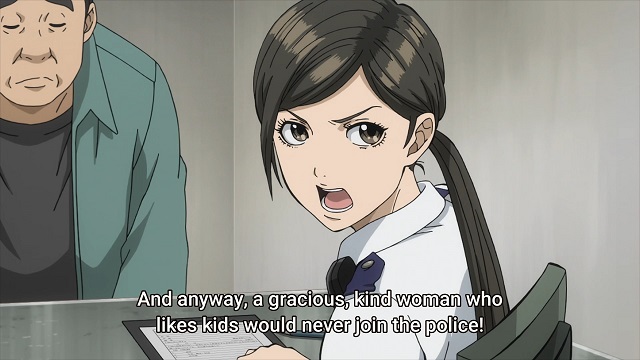 Due to a poor sense of comedic timing and pretty uneven pacing in general, I wasn’t overly impressed with what this series had to offer in its premiere. I feel like the series would’ve done way better as a straight-up sitcom than a sketch comedy, if that makes sense – it works better as a slice-of-life, office politics kind of show, but not as a jokey one that sets up punchlines, mostly because the jokes themselves aren’t very good. Also, granted, the image of police officers (specifically, koban police officers) in Japan differs greatly from how they’re perceived in many other countries, but nonetheless, I deeply question the wisdom of releasing an anime about police at this particular point in history. To that end, some of the content came across as borderline offensive, so be wary of that going in.

Leadale no Daichi nite/In the Land of Leadale

Oh look, it’s an isekai show based on a series of light novels in which the lead protag is wildly OP. Who’d a thunk it? To be fair, there’s nothing that struck me as terrible about this show in particular, and I do absolutely give it props for featuring a female lead, which as far as isekai goes, is (somewhat depressingly) unique. (I mean, it’s been done before, but not a whole lot, at least that I’ve seen.) There’s also little to no fanservice that I saw based on this premiere, so points for that too. Otherwise, it’s a fairly fun yet cheap-looking show that I have no personal interest in, so I spend the majority of the episode politely bored.

Speaking of bored. I have the least to say about this show because I truly was incredibly bored – to the point where I actually didn’t make it all the way through the first episode, so feel free to take whatever I say with a grain of salt. This show looked and behaved generic af. I disliked most of the characters on sight, I disliked the art direction (you’ll know what I mean if you watch only a few minutes – the style may appeal to some but it’s just not my cup of tea), and I finally quit about halfway in because I had other stuff to do. I thought about going back later to at least finish off the premiere, but… nah, my willpower isn’t that strong these days. Bleh.

Enjoy browsing my site? You can support Otaku Lounge by buying me a coffee!

5 thoughts on “Anime Taste Testing: Police in a Pod, Land of Leadale, and Tokyo 24th Ward”